Zhuge Village is an ancient Chinese settlement in China’s Zhejiang Province. Unlike other remaining ancient villages in China, Zhuge stands out differently from the rest. It is one of the two ancient villages in China whose layout is based on the Yin and Yang emblem. Thus, the locals call it Zhuge Bagua Village or the Village of the Eight Trigrams. This shows that in ancient China, Taoist philosophy contributed to planning how leaders planned out their villages.

The village got its name from a respected Chinese military strategist, Zhuge Liang. Many residents here claim to be descendants of the famed General.

Zhuge Bagua Village is 700 years old. So most of the houses that you see here are from the Qing and Ming Dynasties!

The architectural design of the structures here are mostly of Huizhou-style which were pervasive in communities along the Yangzte River, especially on the Southeastern part of the delta.

The latest census recorded that there are around 4,000 people living in the village.

Walking around in the evening was an experience you should do when visiting it. It really looks like the ones who see in period-themed Chinese films.

Before the red lanterns are turned on, old residents are chillin’ outside their doors. They’re either gossiping (I think so) or just talking about their day or sharing their plans for the next day.

When the red lanterns came on, the village looks different. Head directly to the pond, the heart of the village, and see its mirror reflection.

It was magical to witness its beauty and so calming that I decided to sit here for 30 minutes. While sitting, someone played the erhu (a Chinese musical instrument) at the nearby restaurant. It was truly a delightful experience!

I like that evening in the village wasn’t bustling with tourists. As you can see in these photos, they look like I was the only tourist there! 😂

There were a few restaurants in the village but I opted not to eat there. The morning I strolled around, I saw people “cleaned” or “washed” their food in the murky pond. Seeing that was a shock and a complete turn off for me.

Avoid venturing out beyond the pond as there are many dead-end alleys that could get you lost easily. These alleys, as legend has it, confused enemies that the villagers effortlessly captured them.

From Hangzhou, you can take a bus from South Bus Station to Lanxi City. It takes about 3 hours. When you arrive, take a taxi to your hotel.

If you are departing from Jinhua, there’s a bus every hour from the bus station to Lanxi City. It takes an hour and a half. Do not expect an air-conditioned coach. I was on a bus that was full and the torn seats were really dirty. But, duh, I’ve seen the worst! 😝

Most of the hotels are located in Lanxi City. Unfortunately, the hotel where I stayed is closed at the moment. You can book a place to stay via Trip.com or Booking.com. 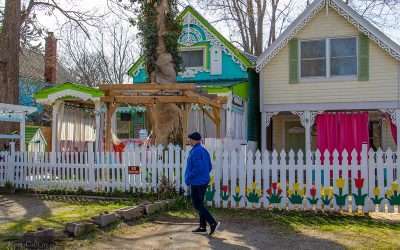 The Painted Ladies of Grimsby – Gingerbread Houses by the Beach