The wonder of Machu Picchu has been on the bucket list for so many of us. We can’t blame these travelers – the photos we see online and on social media are just stunning, and we want to be there! Of course, I’m one of those travelers who plead guilty. Even during the low season, the crowd at Machu Picchu doesn’t seem to end.

Machu Picchu is so famous that many only associate Peru with this world wonder and this mammoth tourist destination overshadows other unique places in the country. If you have more adventure time to explore different places, here are some goals that could be part of your Peru itinerary.

The well-known travel destination is 80 kilometers northwest of the ancient colonial city of Cusco. Getting there can be confusing for first-timers as there is no direct public transport from Cusco. Ok, maybe there, but I had no idea. But our route was like this: we took a van to Ollantaytambo and took a train from there. Then, a hotel staff picked us up at Machu Picchu village. The next day, our tour guide met us at the hotel and brought us to the bus station that goes straight to the entrance of Machu Picchu.

So, what’s the buzz on Machu Picchu?

Well, every traveler who has never been there and who has been there speaks about it. And yeah, you should go there, too! But don’t get too excited about it because the vast multitude of visitors can dampen your mood. Can you imagine lining up in one spot for the photo op with the background of The Old Mountain? 😂

The Lost City of the Incas

I don’t want to bore you with its history, but when you visit any travel destination, you’ve got to know a tad of its history, right? Machu Pichu, which means The Old Man, is an Inca fortress that’s been around since the 15th century. Little is known about it as there were no written historical documents about it when it was inhabited.

All the things you hear or read about it are products of the investigations of modern archaeologists based on the physical pieces of evidence when they discovered the site. Your tour guide will show you some areas of the site and explain what they were and how these areas were used in ancient times.

The latest research publication in 2022 reveals that we might have been calling this world wonder by the wrong name. The Peruvian and American researchers concluded the “Lost City of the Incas” must have been called “Huayna Picchu” – named after the peak that proudly overlooks the ruins.

As a World UNESCO Heritage Site, the government limits the number of visitors to Machu Picchu daily. That’s a good thing, I suppose. That’s why it is essential to book a ticket or a tour guide days or months in advance. We were there in July; though it’s high season, we could get our tickets a week before our arrival. COVID still lingers, so some people are still adamant about traveling anywhere.

History aside, I think that this Inca citadel is on everyone’s wishlist because of its impressive views. It’s one of those places I’ve been to that is photogenic in every angle – and you could never get enough wherever you stand for that perfect picture!

Facing the Huayna Picchu mountain with the archaeological ruins below is, undoubtedly, the most photographed view. When you google images of the wonder of Macchu Picchu, you will get millions with the same picture!

There are only a few photos you can find that show the rest of the surroundings in the area. Look at all the images in this blog post, and you will have an idea of what the surroundings of the famed Inca ruins look like.

The Peaks. Right after you enter, you will see the towering peaks that are part of the Eastern cordilleras. I call them the ‘skyscrapers’ of the jungle!

The dramatic landscape sits where the Amazon Basin and the Peruvian Andes meet.

Terraced village. Since the estate was built in the mountains, visitors can access it through ancient steps that are everywhere, punctuated by a few canals to give way to the flowing water.

Get your Tickets and Guide to Machu Picchu

In a pre-COVID era, our guide said that many had to book three months in advance because tickets would sell out like hot pancakes. Therefore, I’d really recommend that you book a tour that allows you to cancel a day or two before the tour begins. In these uncertain times, you have to be smart on how to spend your travel money, right? And that’s what we did! We booked our ticket via the Get Your Guide website because of their cancellation policy. If you reserve directly through the local agent’s website, many have a cancelation policy a week before the tour starts. Be wise.

Traveling in Peru by Bus – A Travel Itinerary 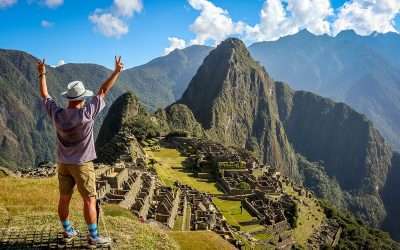 How to Visit Machu Picchu