My 8 days in Sri Lanka was unforgettable! Please read on how I did it in such a short time!

Sri Lanka is a country that looks like a teardrop located south of India. It may not be a well-known travel destination but it can charm you with its endless pristine beaches and verdant jungles. Every region offers a different experience that would surprise everyone – even the most intrepid traveler among us.

I was in Sri Lanka for 8 days last month. My flight landed in Colombo at 2:30 in the morning, got some sleep and started exploring the city at 11:00 a.m. It poured heavily on the second midnight I was there and the rest of the week was really nice weather. Yes, it was a bit hot on some days but, duh, I was armed with a sunblock. And a deodorant, too! LOL 😀 😀

Here are a few things you should know before you get excited.

Getting around Colombo. Tuktuk is everywhere. Try it once or twice but be aware that when heat and dust are combined, it’s not glamorous. 😀 The best way to get around is to take an Uber. It can be way cheaper than taking a tuktuk because drivers would charge you more since you’re a tourist.

Hire a car for 8 days

Public transport in Sri Lanka is not your best option. Traffic from Colombo to the Hill country is a character-building journey. Buses have no AC but, of course, a really good experience, right? Been there. Done that. And the one-million-dollar question is: Why did I hire a car for the whole trip to take me from one place to another? Simply because it’s only 8 days! I don’t wanna waste much of my time in public transport and see / experience a little of the country. And this is the best decision I had on this trip. 😉 Your other option is to join a tour around the country.

Cost of hiring a car with a driver. You can get a car with a driver for $50-60 a day. That already includes his own accommodation and food. You don’t have to worry about that but you should book your own hotel or hostel. Give him your itinerary and be flexible about it. He might know something that is worth seeing along the way. Keep an open mind. Where can you rent a car? There are many of them online – google it. I couldn’t recommend the one I had because of the kind of car he has. It was slower than I expected. And he kept talking on the phone – oh dear! But he was nice though.

Food in Sri Lanka. The country is predominantly Buddhist. So, if you’re a vegan, this is paradise for you when it comes to food options. However, a large population is also Muslim and Hindus – so no pork and beef. If you’re a carnivore, like me, the obvious recourse is chicken!

So, now… let’s talk about my 8-day itinerary in Sri Lanka.

I landed at 2:30 in the morning and arrived at my fabulous guest house at 3:30. I started my tour of the city at 11:00. The driver picked me up on time and I told him to show me the city. In other words, I let him, the local, showed me around – and he didn’t disappoint me.

Places we visited: Independence Memorial Museum Park, Saleem Malaka Buddhist Temple, The Fort, and some other random markets and crowded places. Then, at 4 in the afternoon, I told him to drop me off at Peetah where I had my own walking tour. This is a place where Buddhist temples, Hindu temples, and Christian churches are all within reach to each other. Peetah is a huge and crowded market and I managed to see these places: Jami-Ul-Alfar Mosque, Asokaramaya Buddhist and Hindu Temple, Old and New Kathiresan Hindu Temple, and Wolvendaal Church.

Related Post: 9 Things to do and see in Colombo

Where to stay in Colombo. I had a fabulous stay at Mahazen by Foozoo. The place feels like home and welcoming. If only I had known that they could help me in renting a car and driver, too, I would have done that. So, when you book, ask them if they could help you with the itinerary.

From Colombo to Pinnnnawala Elephant Orphanage is about less than 90 kilometers – but guess what – it took us almost 4 hours to reach there! Aside from the fact that our tiny van was slow, the road was also narrow and traffic was really terrible! Then, before sunset, we hiked up to Dambulla Cave Temple. We arrived at my accommodation in Sigiraya at around 7 in the evening.

Where to stay in Sigiriya. I stayed at Darshani Lodge because it’s just less than two kilometres away to and from Sigiriya Rock and Pidurangala Rock. It’s clean and the room was spacious. The members of the staff are very hospitable, too.

I woke up early in the morning and by 7:30, I was already at the entrance of Sigiriya Rock. To avoid the heat, morning time is the best time to climb the country’s famous rock. By 10:30, I was on my way to Pidurangala Rock. Amazingly, with good night sleep, I wasn’t that tired climbing two rocks one after the other. We left Sigiriya at 2:30 in the afternoon and arrived at Kandy at 6:30 PM (90 kilometres). And oh, in Matale, we stopped at this really amazing and mind-blowing Hindu Temple called Arulmigu Sri Muthumariamman Thevasthanam.

Where to stay in Kandy. I slept in a room with a fantastic view of Kandy – at Kandyan View Holiday Bungalow. I even had my own veranda from my room. The dining tables have an amazing view of the city, too.

We checked out early and went straight to Kandy’s most famous tourist attraction – The Temple of the Tooth. I walked around the lake and the town until I got tired. I told the driver to just go wherever he wanted to go and I’d call him when I was ready to go.

On our way to Nuwara Eliya, we stopped in some of the places where the hill views where fantastic. We’ve seen and passed by cascading waterfalls, panoramic tea plantations, a narrow and zigzag road that can be dangerous. We stopped by for an hour at Blue Field Tea Plantation to learn about tea and for the amazing photoshoot – of myself! 😀 As we snaked our way up the hills, valleys, and mountains, the temperature got chilly, too.

We arrived at Nuwara Eliya at 3 pm. I walked around Victoria Park and the small city on my own while the driver had his long lunch break. 😀 I actually didn’t mind it.

Where to stay in Nuwara Eliya. The House of Leisure is an amazing place to stay in. The place itself is overlooking the emerald tea plantation – and it’s stunning! Stay here not just for its incredible view but also for its amazing staff and nice dinner.

I woke up early to go down to San Pedro Tea Estate. I was the only one exploring it while I was blanketed by the morning mists. It’s so serene and calm. After breakfast, the driver dropped me off at the train station before 9:30 to catch a slow train to Ella for 4 hours. I told him to pick me up at Ella Train Station.

Train from Nuwara Eliya to Ella. There’s a slow train that leaves at 9:30 AM (4 hours). The fast train (2 hours and a half) leaves at 10:30. I chose to ride a train for stunning views along the way. And of course, to experience how the locals move on a train. It was crowded and passengers are allowed to sit anywhere. I literally sat on the train’s open door, with my legs comfortably hanging outside. Cool experience. But, yeah, can be dangerous, too.

When I arrived at Ella Train Station, the driver had already been waiting for two hours. He whisked me right away to Lipton’s Seat. And boy, the drive going up there was the best ride / drive ever! It’s indescribable! You’ve got to see and experience it yourself – to believe it!

We arrived at Udawalawe National Park at 8:30 in the evening. Yes, it was loooong drive!

Where to stay at Udawalawe National Park. Visitors come here because they want to do a safari. And the best place to stay here is at Kottawata Village Hotel. It’s really good value for your bucks. Nice rooms, fabulous food, hammocks, a swimming pool, landscaping, etc… They can also arrange a safari for you – riding on a jeep.

Our ride from the National Park to Galle was less traffic and road conditions were better. We had a couple of stops but mostly buying fresh coconut juice and a few temples. We finally arrived in Galle at 1 in the afternoon. I met a friend of mine I’ve never seen for 6 years and we had lunch together. We had our own walking tour around Galle Fort before we wrapped up our day at 7 in the evening

Where to stay in Weligama. Instead of staying at Galle, I chose to book a hostel in Weligama (30 minutes from Galle). However, the hostel I chose was not the one I expected it to be. There are, of course, many options in the area. Weligama Bay is known for its surfing activities (though the waves aren’t really that impressive) and beaches. Along the bay, you’ll find some fishermen on stilts, too – doing nothing but posing or “fishing” for money.

Early in the morning, I walked for two hours along Weligama Bay (aka beach) where a lot of surfing boards and lessons were going on. It felt so good to have my feet drowned in sea salt and fine sand. A number of good and trying hard surfers were busy frolicking with the unimpressive waves. Fishermen were keeping their fishnets and pushing their fishing boats away from the shore. I sat for a while and when the heat burned my skin, I decided to go back to my hotel.

On our way back to Colombo, we had a stop at the Turtle Conservation Center and the Mask Museum. I was too tired when we finally arrived in Negombo – known for its beach resorts and golden sand. I didn’t have time to explore the place though, except going into two bars and a really good restaurant – Lords – for dinner.

Where to stay in Negombo. Gomez Place is a fabulous place to stay! The rooms are so spacious and well-decorated. I love their huge bathroom, too! And, oh, they’ve got a swimming pool, too!

The reason why I stayed at Negombo on my last night in Sri Lanka is that it’s just 15 minutes to the airport. And since I flew on a weekend, traffic was easy breezy – so we got in at the airport in less than 15 minutes!

And that’s how my sojourn in Sri Lanka ended. 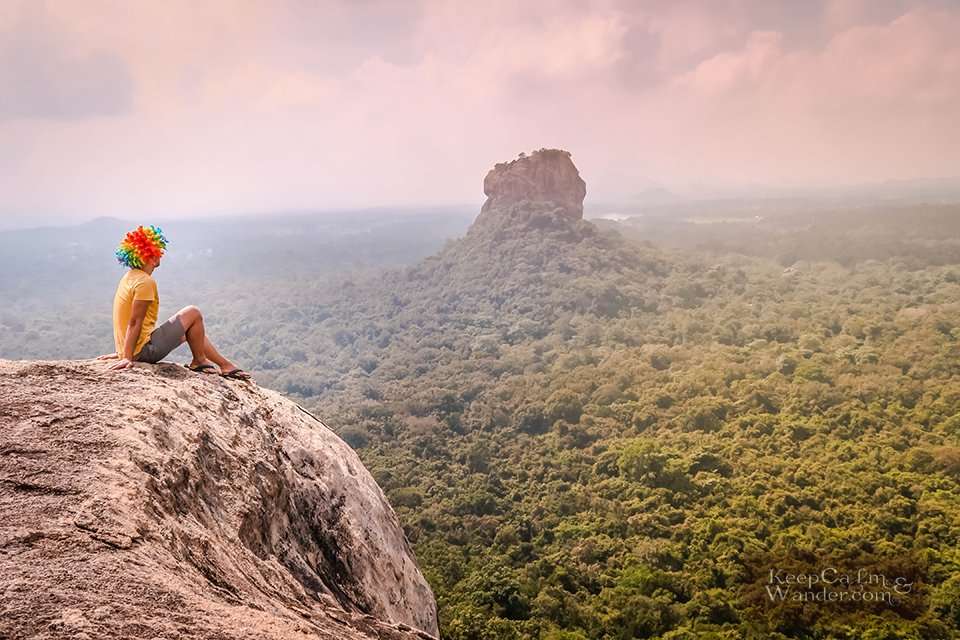 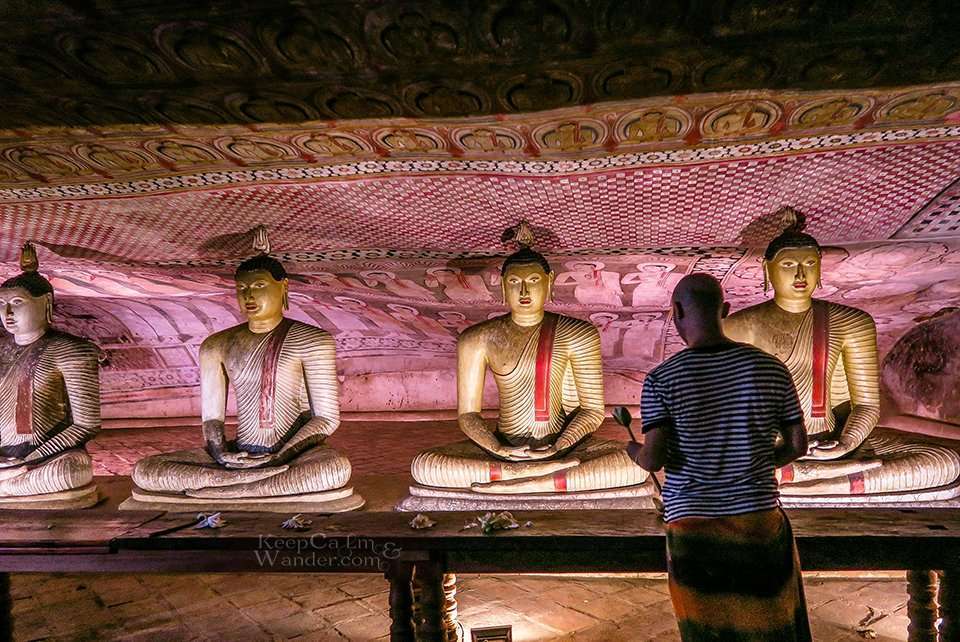 Dambulla Cave Temple is The Sistine Chapel of the Buddhism World