When I say Hollywood, I don’t mean Los Angeles. I mean the Hollywood Boulevard in Los Angeles, the Entertainment Capital of the World.

Hollywood is made for tourists. It’s heavily-infested with tourists of all types, from all over the world. Hollywood Boulevard is a long street where you can sashay down the Hollywood Walk of Fame. Just because its Hollywood, it doesn’t mean all that glitters in cinema are there. Nope. You would be shocked that such famous street is mostly boring and in some areas, a lot of homeless people are wandering around.

All the “things to do and see in Hollywood” is just outside Hollywood/Highland station. It’s the most exciting (aka touristy) area of Hollywood and it stretches in one block. Only. If you don’t plan to pose in front of all the stars in the Hollywood Walk of Fame, you will be done in less than an hour. Really? Yes, really!

Glamour? Pffftttt…don’t find it there. The only glamorous-looking people I saw there were the salespeople in Zara. Period. At 10:00 pm, when the crowd starts going to their respective hotels, Hollywood Blvd is so dead already like it’s an abandoned city where they just keep the lights flickering to desperately lure whoever is left wandering on the street.

How do I know? I stayed in a hostel right across the Highland Metro station and my room’s windows are overlooking the street where I could see all the major attractions in the area. And for any visitors, like me, staying here is a good thing. Knowing Los Angeles where car is needed to get around, it’s a relief to me that all things I/we imagine of Hollywood are all in one convenient place.

Here are the things to do and see in Hollywood Boulevard/ Highland area. 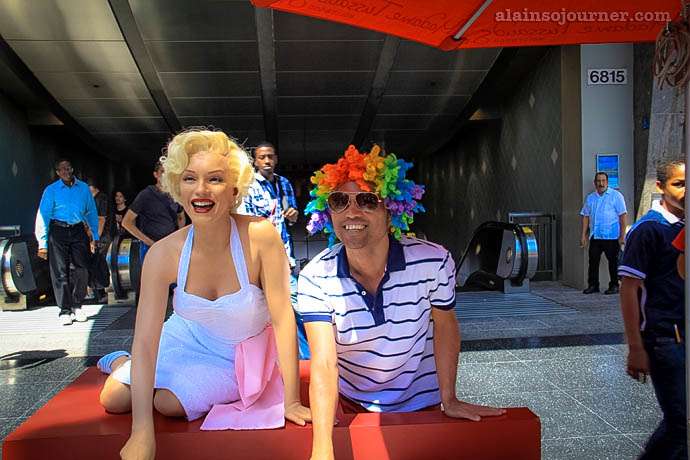 Bring your props when posing with Marilyn Monroe.

As soon as you exit the metro/subway, there’s a wax figure of Marilyn Monroe right in front of the stairs. You can’t miss the blonde bombshell.

2. Find your favorite star at the Hollywood Walk of Fame

There are almost 3,000 stars and most of the notable ones are in this area. If you walk on your right (when exiting the station), you will find these big names: 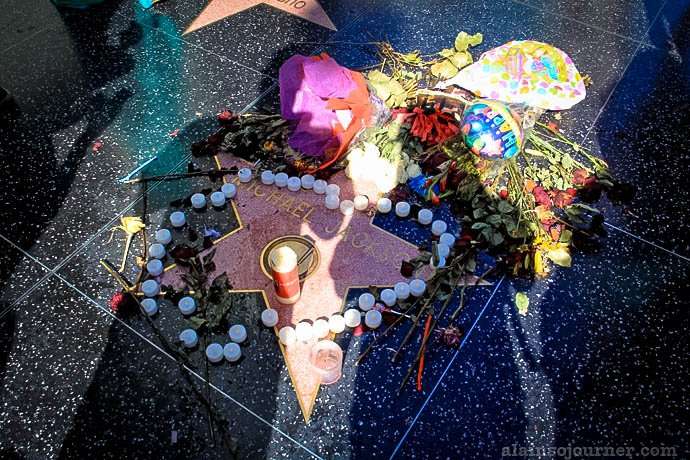 Even after five years since Michael Jackson died, his Hollywood Star is still surrounded with flowers and gifts. 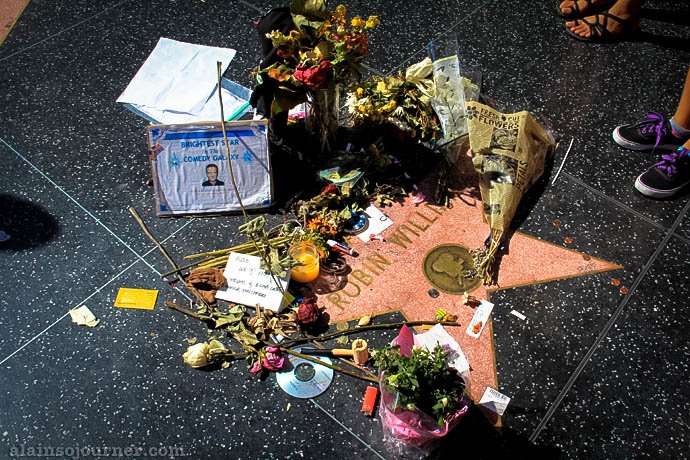 Robin Williams died this summer. His Hollywood star is showered with flowers, souvenirs and gifts.

If you want to find Ellen Degeneres Hollywood star, it’s outside the Hollywood/Vine station (one metro stop from Highland).  Hers is a star surrounded by Jennifer Aniston, Jennifer Lopez and Jennifer Hudson. 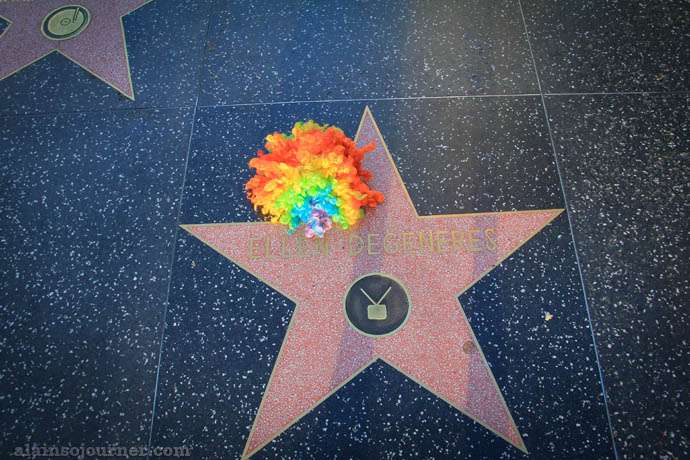 I tried to go into Ellen Degeneres show but, unfortunately, she didn’t start her next season a week after I left.

There’s a mall next to the station. Go up to the third floor and onto the bridge that connects the two buildings. From there, you can see the Famed Hollywood sign from a far distance. Good luck if you could see the sign in the background of your selfie. 🙂 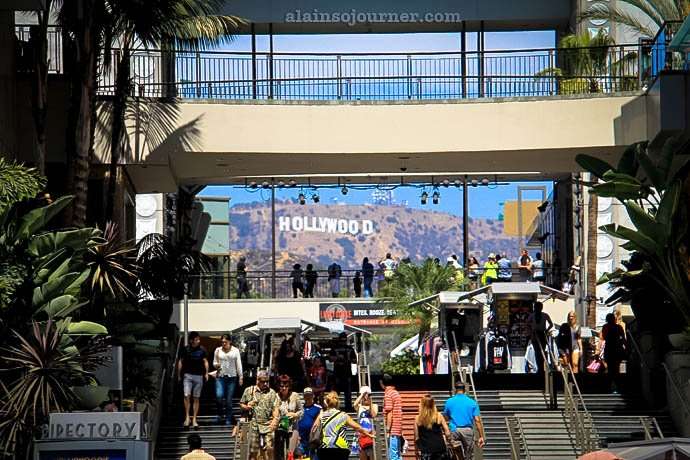 Hollywood Sign is up there and away from downtown Los Angeles.

Ok, there’s really no red carpet in there but remember, Dolby Theater is where the Red Carpet
Welcome happens during Oscar season in January/February. It’s here where the stars are judged in what and who they are wearing. Strut your booty in that concrete pavement and imagine you are in the footsteps of the glamorous stars, dead or alive. 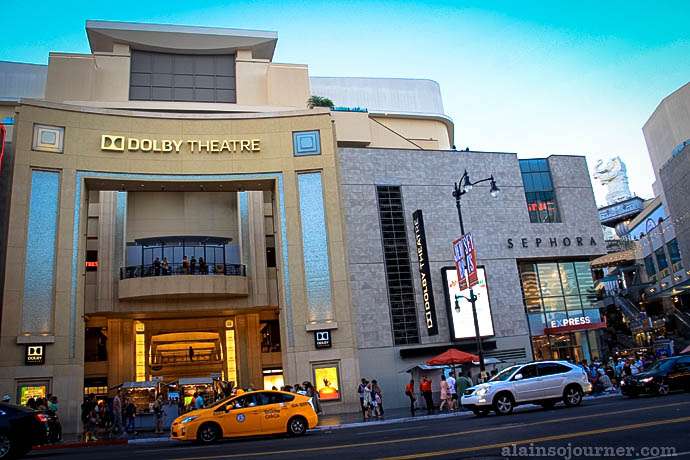 Strut your booty in that concrete pavement and imagine you are in the footsteps of the glamorous, dead or alive.

5. Leave your footprints or handprints at Grauman’s Chinese Theater

Right in front of the Chinese theater are the footprints and handprints of famous people with their message to the world. 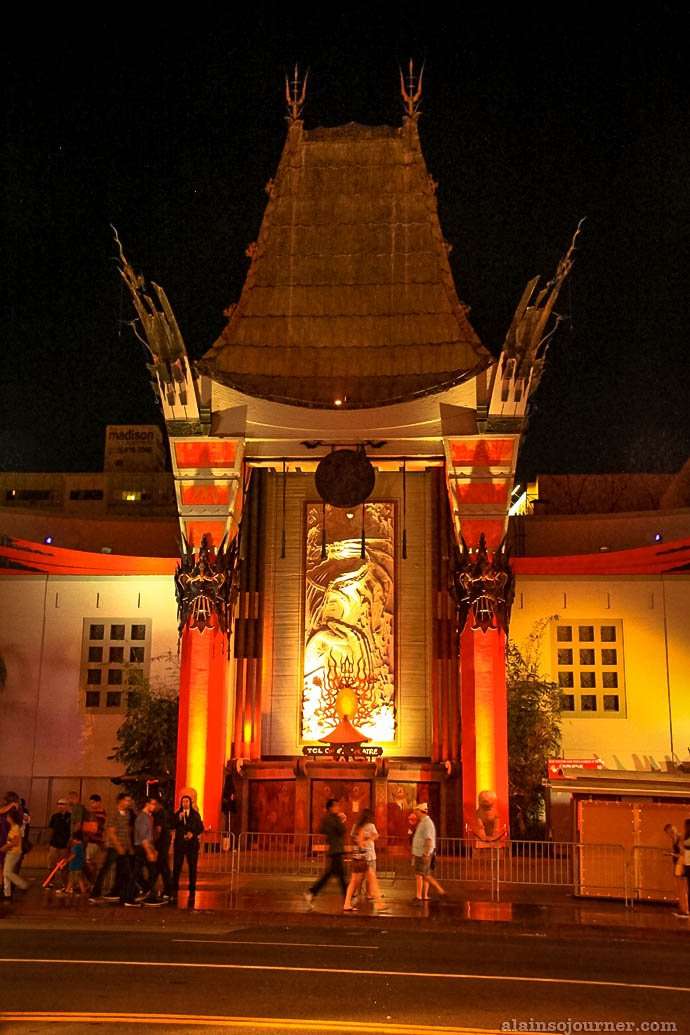 You can’t really leave prints but it’s fun to find whose feet and hands yours would fit into. 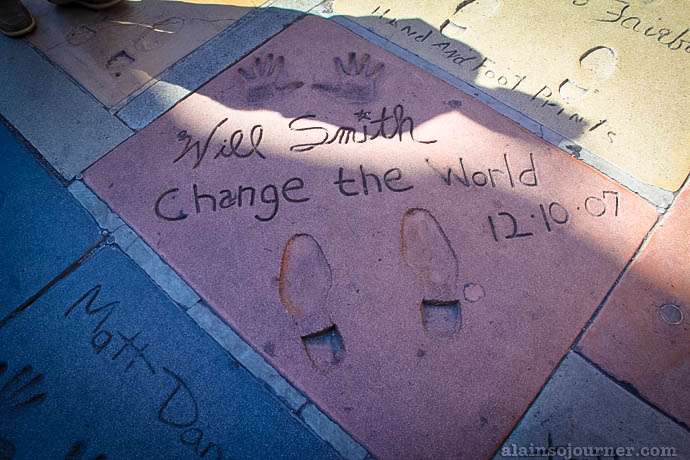 I’m sure your friends and family would love to receive something from Hollywood. Souvenir shops are everywhere. And expensive. 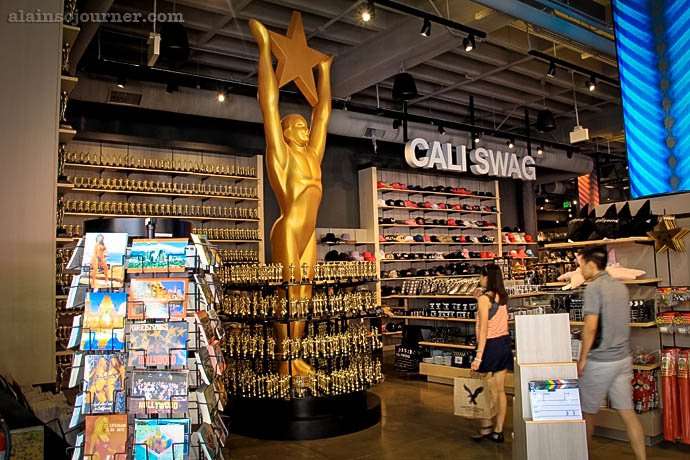 7. Take a selfie with Madame Taussaud’s wax figures of the famous and the infamous

This is the nearest thing you could do to tell your friends you meet a lot of famous Hollywood stars in Los Angeles. Madame Taussaud’s wax figures are surreal. 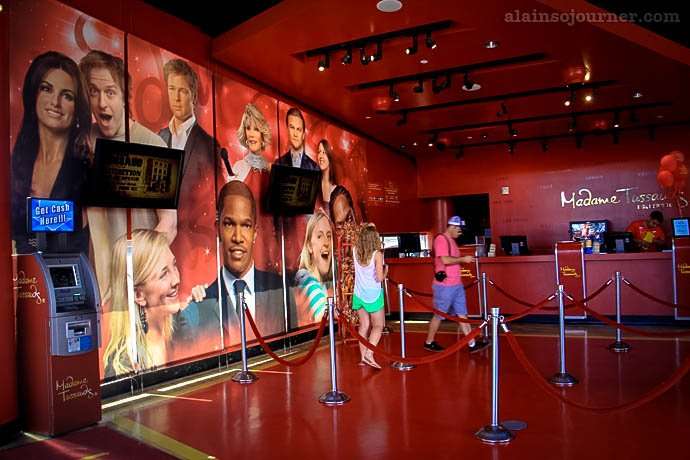 8. Gawk at the Statues of Hollywood’s Four Women

The statues of also known as the Gateway to Hollywood. You can’t miss it. It’s right there at the northern tip of the Hollywood Walk of Fame. These four women represent the diversity of the leading ladies in Hollywood: Dorothy Dandridge (the first African-American woman nominated for Best Actress); Anna Mae Wong and Dolores del Rio who starred in over 30 films. They’re silent film actresses, too; and Mae West, the outspoken actress and writer. 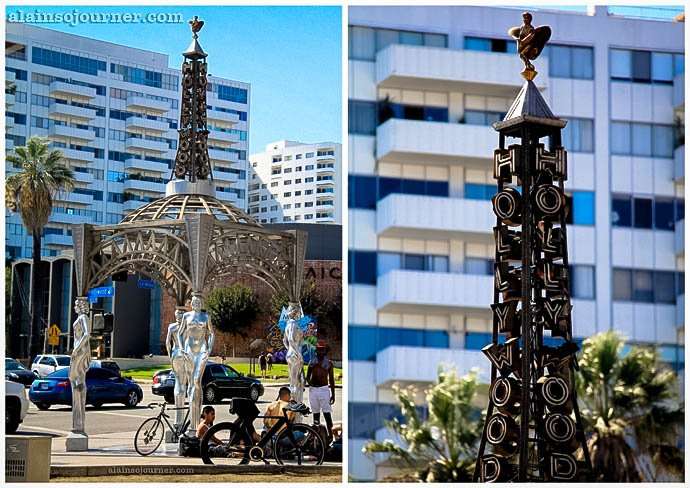 And of course, at the top is Marilyn Monroe in her famous pose.

9. Have a selfie with the buskers

There are sooooo many of them there. Pick your favourite and strike a pose with them. Be ready for spare moolah to hand in after the perfect pose. 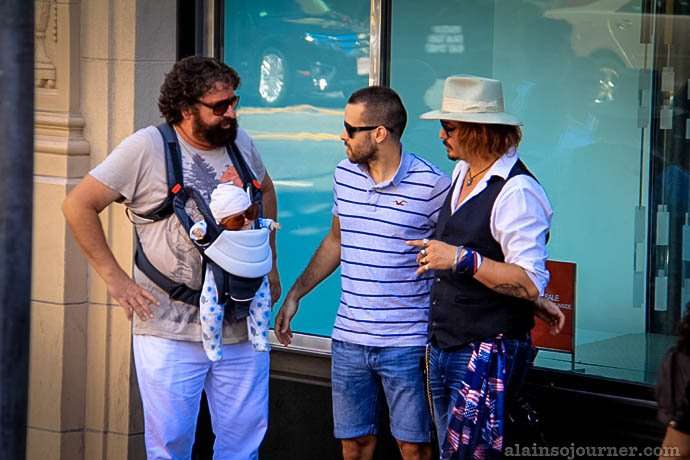 This is a really beautiful theater. If you have no time to watch a movie/show here, just gawk at the ceiling and its amazing architecture. 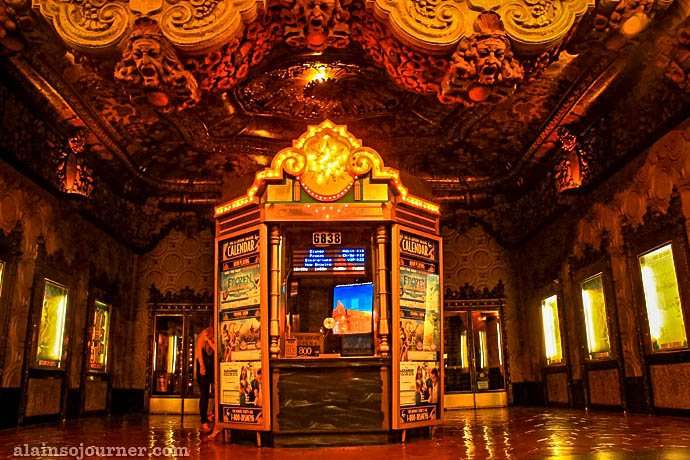 11. Give in to the temptation of the Ghirardelli Chocolate

Because we all love chocolates. Even if you don’t you’ll always find something you like—from the many choices inside. 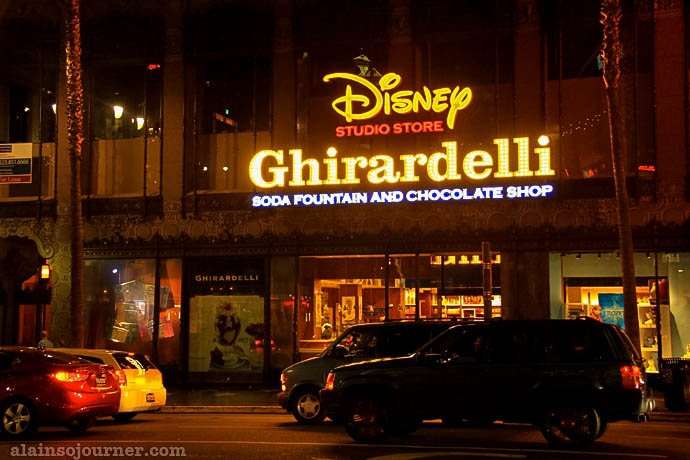 Taste you would always want—Ghirardelli chocolate.

There are many tour booths in this area. Try the tour that brings you to Beverly Hills and spot the houses and mansions of the rich and famous actors, musicians and millionaires. 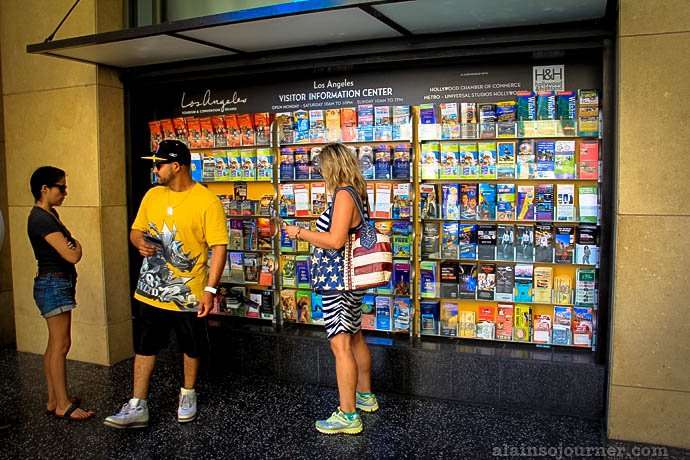 The Hollywood Tourist Information Center has so many brochures that get you discounts to tours, restaurants, bars and more. 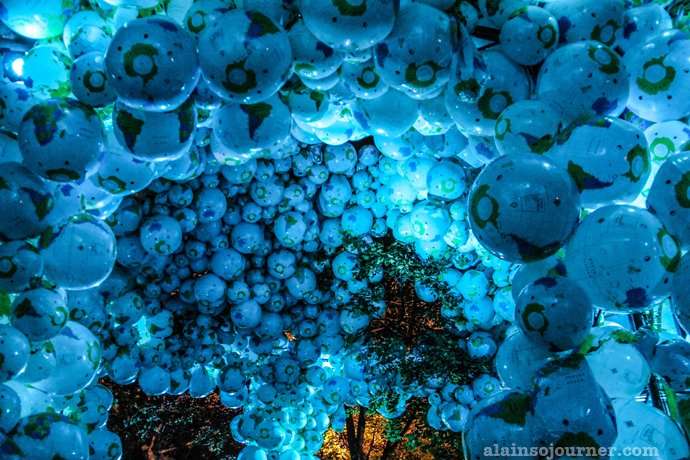 My Adventure at the International Travelers House in San Diego