The Cultural Revolution in China is definitely NOT over yet.

There’s one more restaurant standing— on the outskirts of Beijing, just outside on the East side of the fifth ring road.

Kid you not. This is one place where the atmosphere is VERY revolutionary and where nationalism is instilled above yourself.

This is one place where comrades serve their customers with agility and with utmost efficiency (though twice, they ignored my request for additional chopsticks and an extra chair at our table).

This place is uniquely called The Cultural Revolution Restaurant.

The name itself is intriguing and sounds like there’s something to offer. So, 12 of us braved the Saturday afternoon traffic in this city and went to check out this place.

When we arrived there, we were greeted by a lady garbed in a plain ugly green army uniform with a red band on her left arm. She wore a green communist hat with a star in front of it. She guided us to our table and whoaaaaa….. the place was hugeeeee. It was like there was a mass banquet going on there. It was festive.

The walls were painted with propaganda photos and slogans of the Cultural Revolution. Chairman Mao’s massive portrait is used as a backdrop on stage and dominated the whole space of the performance area. It looked like The Chairman itself was looking down at his comrades who were celebrating the victory of war against, who else, the Japanese!

The waiters and the waitresses were dressed in Red Army‘s uniform—and so were the performers. They were young and did their job like a pro—in terms of how a communist soldier walks, talks and salutes. They move in unison when they perform in a group. And yes, the ubiquitous red book (with the Chairman’s words of wisdom) can’t be missed.

Performances vary from singing to dancing and to interpretative storytelling. It’s a musical play! There was this dramatization of the Chinese and Japanese war–which, of course, the Chinese won it.

Dances were depictions of how the peasants worked in the countryside in the name of the Party. They toiled lands and fought hard and worshipped Mao like no other. There was also a scene where the counter-revolutionaries were sent to camps for re-education.

The songs were very revolutionary and patriotic. There was one time when all the Chinese customers stood up from their chairs, waved the red banner from their table, and sang the song of courage with pride and enthusiasm.

I was blown away by this part. We were the only ones who didn’t stand, of course. It was an amazing display of Chinese pride.

Most of the customers seated were oldies (but not the senior citizen types). They might be in their 40’s and 50’s. For sure, those songs rang a bell to them. Or maybe, it struck a chord in their hearts.

The food is forgettable. My students warned me not to go because the food is not good. And it’s true. I didn’t eat that much really. I just had a few thin slices of meat and a small serving of noodles. And the soup was a disaster. I only speak for myself, not for everybody.

Customers have to spend RMB700 above per table. Doesn’t matter how many people are in a group.

Just be aware that the restaurant is far. And it’s very hard to get a real taxi when going back to the city. However, there are black taxis that will charge you more than you expect. 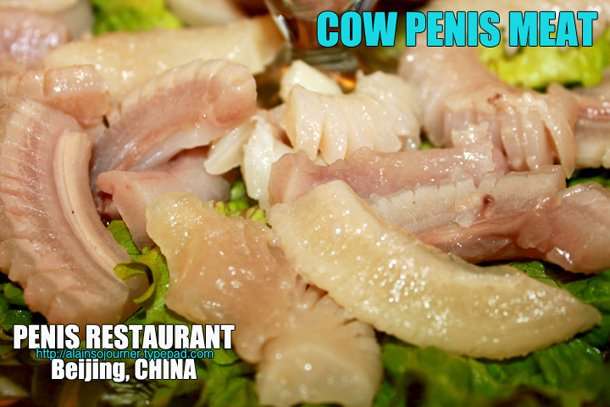 The Penis Restaurant in Beijing