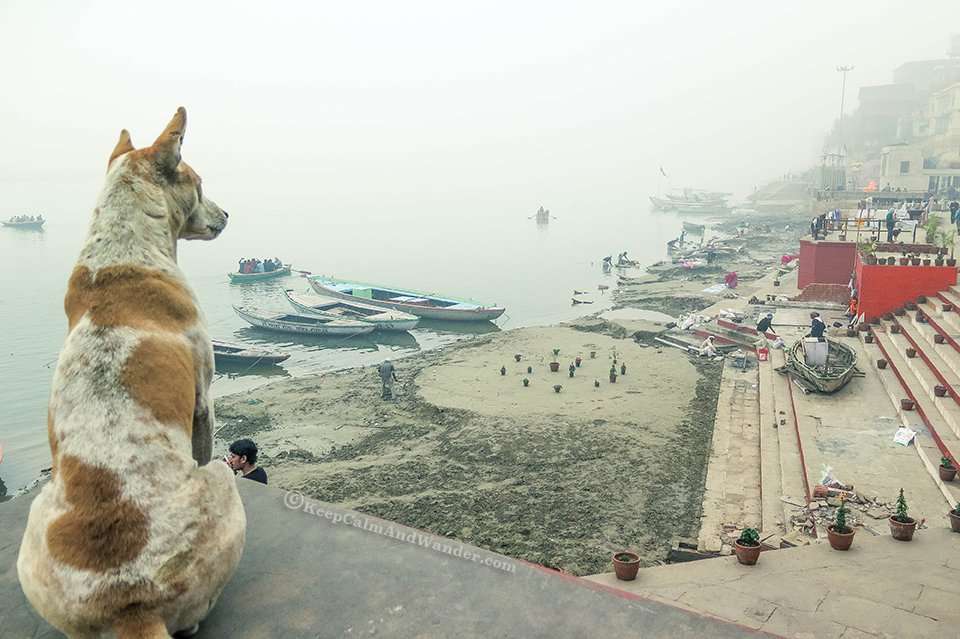 This dog must have been curious of what the humans are burning at a far distance.

The burning of the dead on the banks of Ganges River in Varanasi is not for the faint-hearted. There’s nothing like this in the world where cremation is done in public view. Locals and tourists can sit and watch the whole ritual from a distance or closer if you’re brave. However, taking photos seem be taken discreetly. As the local Hindu sitting next to me said, “Be discreet but respect the face of the dead.” I snapped two shots from where we sat and spent most of our time in silence.

The Burning of the Dead on the Banks of Ganges River in Varanasi is a Hindu tradition. The Ganges River is considered the holiest in India. They believe that being cremated along the banks would free their souls from their bodies. Thus, the cycle of life is complete.

The rituals start by putting the body on the river while the hired men pile the logs to be burned. After that, they bring the body (wrapped in orange cloth) near the burning pit to dry. When it’s dry, they placed the body on the pile of logs and more pile of logs on top of it. They also put some powder and incense to get rid of the smell. There are joss sticks, too.

What’s interesting in this ritual is that only the Doms, a caste lower than the Untouchables, can touch the dead. Why? Because death, according to Hindu belief, is contagious. On the other hand, no women are allowed to watch the ritual because it’s a hard ordeal for them. A close male relative will foresee the rituals of the cremation, including paying the Doms. This relative dresses in white and is the one in-charged to lit the fire.

When the ritual is done and the body is burned, the Doms kill the fire by pouring water from the river. The ashes are thrown into the river, too. Dogs, goats, cows and sheep congregate around the burning pit.

You see, even in death, humans are not equal. The rich can afford to pay sandalwood to be used for burning. The middle-income earners can pay for the mango wood. And the poor? There are some of them who just throw the bodies on the river and let it flow, or float. I saw one while I was on a boat tour along the banks. Man, I thought it was just a sack of something until the boat man told me it’s a dead body. Few meters from us were people bathing and doing their laundry. I was stupefied. How polluted Ganges River could be?

The Burning of the Dead on the Banks of Ganges River in Varanasi is an experience you won’t forget. There are many ghats (burning temple) along the Ganges River – where prices range from INR3000 – INR10,000. And according to the man I sat with, if he’s not exaggerating, there are more than a thousand bodies burned everyday.

To complete your Varanasi experience, see the Ganga Aarti at Dashashwamedh Ghat at night.