Despite the fury of the snow storm last Friday, I was actually thankful that megabus didn’t cancel any trips for Montreal. Though the snow fall already stopped  around 9 p.m. and the city was literally buried in snow and transportation services were all delayed. But the good news was: commuters were all patient despite the long wait that seemed unbearable.

Our bus was supposed to leave at 12:30 but when the bus driver announced that we had to wait for 15-20 minutes to wait for a “client”, some of us didn’t really understand why we have to wait for this “client”. If he’s late, he’s late. No excuses. Not even snow storm excuses. Then, of course, 20 minutes later, there’s no sighting of this “client”. He arrived at 1:16 a.m. Someone sitting on the back shouted for jubilation that woke up some who were already asleep. And as we moved slowly out of the city, came another announcement: we won’t be on our way directly to Montreal, but we have to pass by the Scarborough Town Center to pick up the driver. Ugh!

Right after having breakfast at McDonald’s in Montreal’s Latin Quarter, I was ready and excited to see the Snow Village / Village des Neiges at Parc Jean-Drapeau, which is across the island.

As soon as I exited the subway, it was disappointing to look around for directions and saw nothing for tourists to be guided to the snow village. I followed some group of people thinking they will, perhaps, go to the same place I’d be going too. Our feet brought us to the bridge and we were all confused where to go. There were around 9 of us on the bridge and we were asking each other the same place. It turned out we were all tourists. LOL…

So…. I went back to the subway, which is quite a walk, and asked someone at the booth where the Snow Village was. She directed me to the right path. While on my way, I saw the banners with directions to get there–but in French! Yes, in French ONLY! I only understood the word village in it, so I figured out that should be it. And guess what, I was lucky!

The Snow Village‘s theme for this year is, all about New York City. Well, a replica of the famed city but I didn’t quiet feel it though. LOL… However, I was impressed. It was my very first visit to a snow village–and I can’t wait to lie down on the ice hotel.

WHERE TO STAY IN MONTREAL

Part of the snow village during the day. You can buy a ticket for $18 (adult) and if you wanna go back at night for the stunning lighting effects, you can do so but make sure to ask someone to give you stamp on your hand and show it when you get back later at night. Just in case the stamp is washed out, keep your receipt.

View of the snow village at night with the city of Montreal serves as the backdrop. Just like I said, the beauty of the ice sculptures can be more appreciated at night because of the lights. They are more dramatic to see and more stunning to explore.

WHERE TO STAY IN MONTREAL
Here’s the face of the Statue of Liberty, an enduring symbol of New York City. Half of the rooms at the Ice Hotel are hands-off to visitors. You can only take a glimpse of these rooms by standing at their doors. The other rooms are open for everybody to lie down, explore, touch and lick the ice if you want. LOL.. (This room is off-limits to visitors)

The romance in New York room. This is, obviously, the best room for lovers. A heart-shaped bed surrounded by ice carvings of New York skyline and two lovers kissing. (This room is off-limits to visitors) 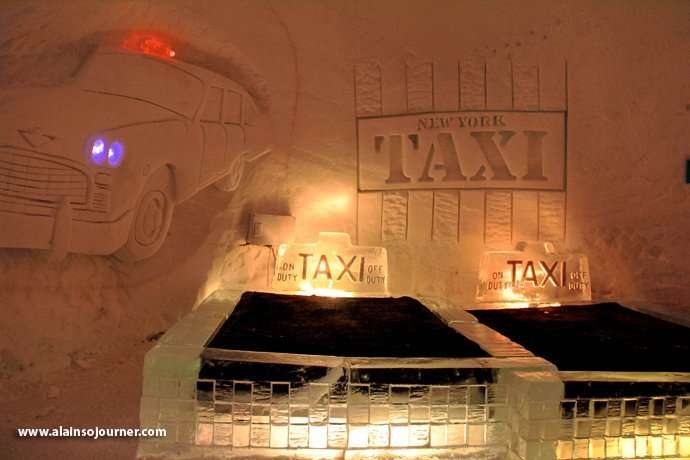 So New York, eh? On the other side of the wall are some of the famed street signs of Wall Street, Times Square, Fifth Avenue, etc… (This room is off-limits to visitors)

There are four beds in this room. I’d like to think this is for budget travellers, like me? LOL…  (This room is off-limits to visitors)

I don’t know the relation of Jaws to New York City. If you are wiser than me, let me know. 🙂 (This room is off-limits to visitors)

St. Patrick’s Cathedral, a New York staple on 5th Avenue. During the day, this room was bland. But, when I got back at night, it’s stunningly beautiful. (This room is off-limits to visitors)

I took me time to figure this room out. Is it Apple? (This room is off-limits to visitors)

New York nightlife. As soon as I saw this, I remembered a Grammy-nominee diva, Andromeda Turre. Ok, not that hairstyle. LOL… (This room is off-limits to visitors)

The Eloise Room. Eloise is the lead character of a children book of the same name written by Kay Thompson. Eloise is a 5-year old girl who lives on the top floor of the Plaza Hotel on the corner of 5th Avenue and 59th Street. It is believed that Eloise is The Legendary Liza Minnelli, daughter of Judy Garland and granddaughter of the author. (This room is off-limits to visitors)

The Ice Restaurant which can hold 100 guests. I asked for the menu and ordered some kind of a drink but the waiter directed me to go to the bar instead—if I only wanted a drink. The waiter told me they would let me in if I’d order food, which is beyond my budget. LOL…

WHERE TO STAY IN MONTREAL
So, I went to the bar and ordered a Jagermeister. Unlike the seats and tables at the restaurant that are covered with place mats and faux fur, there’s nothing here. So, literally, your ass will be frozen if you decide to sit on the bench. LOL…

The Ice Church. Oh, yeah, that’s me, saying, “Allelujah!” Before visitors were allowed to go inside, there was wedding, a real wedding, that took place here.

The Ice Hotel hall. The rooms are in both sides of the hall. It’s dreamlike—like you were in the world of “Alice in the Wonderland”.

Another hallway at the Ice Hotel. This looks like some kind of a whore house in the red lights district. LOL…. I guess, that was the point? :))