The Sin Sze Si Ya Temple is the Oldest Taoist Temple in Kuala Lumpur, Malaysia. Constructed in 1864, the temple honors two deities, Si Sze and Sin Sze Ya who was believed to guide Yap Ah Loy reaching his Kapitan status.

I did not really plan on seeing this temple. While walking around the central market of KL, I happened to pass by. It looked like it was a parking space, but when I saw five tourists at the door, I thought it must be on their guidebook. So I asked the name of the temple and google it before entering. I had to have some information firsthand because there were no descriptions inside. In many guidebooks, the temple is one of the many tourist attractions to visit in the city.

A few women were busy doing their thing. Some were arranging flowers and offerings, others were rolling paper, and a few were writing something.

At the entrance, you can’t ignore the smell of incense.

Then, on your right, before the door, you will find an ancient wooden sedan chair encased in a glass box. And as you can see, the chair dates back to 1893. It’s more than a century old already! The chair was used to carry the statues of the deities during religious celebrations and processions.

As soon as you enter the door, don’t forget to look up. You will find two carved panels that are hanging there since it was built.

Inside, you’ll find the huge statues of the two deities revered by Taoist devotees.

Students and parents crowd the temple before important exams happen. They pay their respect to the god of Education, Wenchang Dijun, in Chinese mythology.

Also, you will find some devotees circling the main altar three times. They believe that the act will bring them good fortune.

And most of all, before you exit, try the fortune-telling sticks for 1 Malaysian Ringgit. That is if you want to know what your future/fortune awaits. 😉 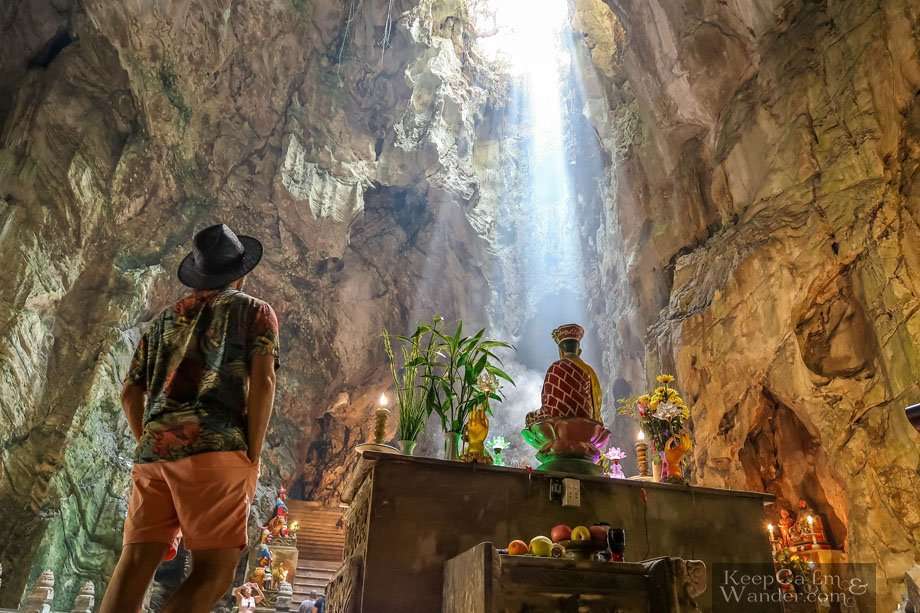 Exploring the Caves at the Marble Mountains in Da Nang