Sedlec Ossuary in Kutna Hora should be in your itinerary if you have an extra half day in Prague.

I’m not gonna scare you with this post because it’s Halloween Week – but I’m gonna bring you with me to Sedlec Ossuary, a church with 40,000 human bones inside! It’s chilling, eh? Don’t worry – there’s nothing to be scared of. Hopefully, after seeing all these, you’d still be able to sleep well, without nightmares. Guess what; I was fine. I was able to sleep without monsters and ghosts in my dreams.

I’ve got to be honest though – I found it weird the moment I stepped inside. I was fascinated and overwhelmed by all the skulls and bones surrounding me like they’re trying to petrify me. I had goosebumps the entire time I was there, but I was not in a hurry to get out of that holy place; in fact, I was the last person in our tour group who went back to our bus.

How to get to Sedlec Ossuary. It’s an hour drive by car from Prague – and the best way to get there is by joining a half day tour to Kutna Hora. Every hotel and hostel in Prague advertise this tour, and they can also book this for you.

Now, you might be wondering why on earth Sedlec Ossuary is decorated with 40,000 bones! It actually has a fascinating story. Read on…

Sedlec Ossuary is a Roman Catholic Church in Kutna Hora, outside Prague.

As the name suggests, the interior is elaborately decorated with human bones!

And yes, including baby bones!

The most stunning feature in this chapel is the giant chandelier!

As you can see, it’s artistically put together with at least one of EVERY bone we have in our body.

Behind the impressive chandelier is, of course, Jesus Christ on the cross.

Another work of beauty that impressed me was the coat of arms of the Schwarzenberg Family.

Behind that, are the piles of bones that must have been excavated decades or maybe, centuries ago.

So now, are you interested to know about who, what and why somebody thought about building this?

Long, long time ago, in 1278, an Abbot of Sedlec Monastery was dispatched by the King of Bohemia to Jerusalem.

When the Abbot returned, he carried with him a jar, full of soil from Golgotha.

Golgotha is a holy place, just outside Jerusalem, that Christians believe where Jesus was crucified.

When the news spread about the Abbot with a jarful of soil from the “Holy Land,” many people from various places wished Sedlec to be their resting place.

That’s why the burial grounds had to be expanded.

Centuries later, a Gothic church was built near the cemetery in the 15th century.

Its basement was used as an ossuary (a room where the bones of dead people are kept).

The bones remained there until 1870 when Frantisek Rint, a skilled woodcarver, was told to arrange the bones in place.

And of course – he didn’t disappoint us! As you can see, he delivered!

The chapel might look like a morbid place to be in – but it’s actually peaceful. I think that’s because everyone respects the dead. Or maybe, they’re scared to awaken them. 😉

Kutna Hora is a very historical town. In fact, there are UNESCO World Heritage Sites here that are worth visiting. The Church of Bones is not the only site you’ll visit here when joining a half-day tour. However, if you want to take your time and feel the serenity and beauty of the town, there are few hotels/accommodations that would welcome you with Czech hospitality you won’t experience in big cities.

PREVIOUS
Inside Basilica Cistern: This Sunken Palace Has Been Featured in Hollywood Blockbusters 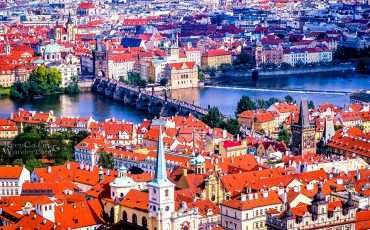 The views from Prague Castle Tower is one for the memory. It’s one of those city skylines that will leave 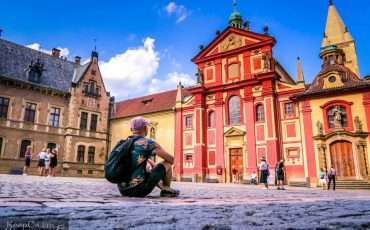 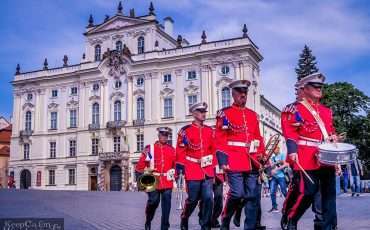 Prague Castle, according to the Guinness Book of World Records, is the largest castle coherent complex. With 18 acres of