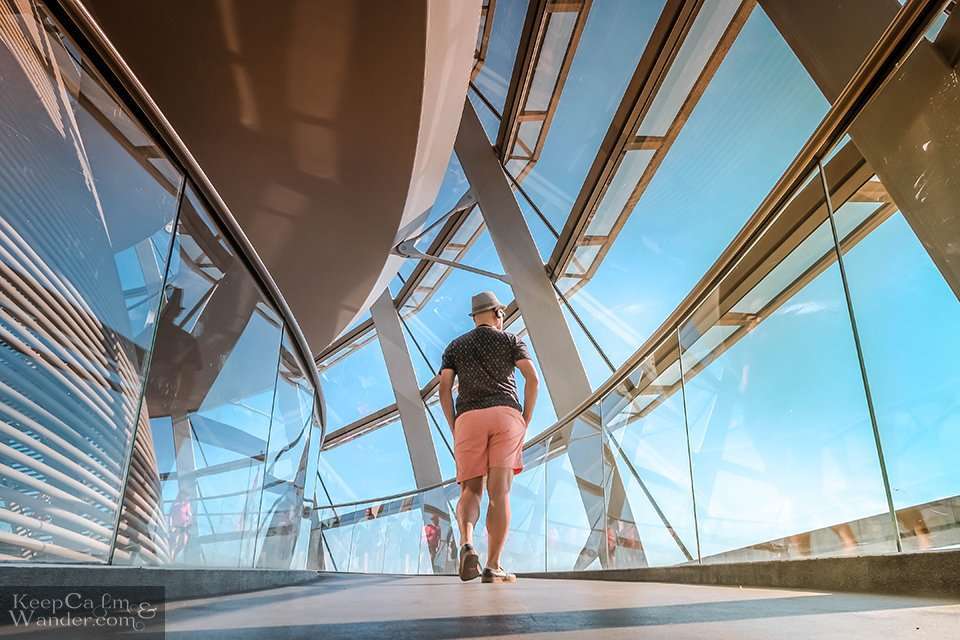 The Reichstag Dome in Berlin is a symbol of the unifying force of what used to be the East and West Berlin. The glass dome is above the Reichstag Building that houses the German Parliament. If you are standing in front of the building, you might think it’s just another dome in Europe. But, hey, it’s not one of those domes! This one is, believe me, one you’ll never forget too soon. You’ll forget about other places you’ve visited in the city but this. This tourist attraction in Berlin is just a few steps north of Brandenburg Tor.

It is recommended to book your visit here, especially in summer. If you’re lazy to do it online, you can always line up at the reservation booth on the right side of the building. If you’re lucky, you might get in on the same day, if there are available time slots. However, you’ll probably get the next-day reservation. You can visit it from 8:00 in the morning until midnight – with the admission at 10:00 in the evening. Bring your passport – and oh, it’s free!

This is the facade of the Reichstag building in Berlin. Did you see that dome in the middle? That is not your ordinary dome.

And yes, it’s on the top of a historical building which destroyed during the World War II.

Now, let me show you inside this modern dome.

To reach the top, you have to climb the spiral platform.

As the height increases, the views of the surrounding area gets better.

Don’t walk fast. Stop for a while and admire its modern design.

Look up and look down. See its beauty, its glistening metals and its mirror reflections.

I couldn’t get enough of its amazing design. It’s clearly photogenic no matter what/where the angle is.

The funnel-like structure directs sunlight to the chamber below where German politicians busy debating on issues.

Its glass mould, perhaps, signifies the transparency of its government.

When you reach the top, grab a seat and enjoy the city views of Berlin.

Sir Norman Foster designed the modern Reichstag dome which opened to the public in 1999.

Though the construction of the glass dome was controversial, nowadays, it is one of the most-visited attractions in Berlin.

I stayed at Hostel a&o Berlin Hauptbahnhof, which is around 7 minutes walk to Berlin Train Terminal Station. You can book it via Booking, Expedia, HostelWorld, and TripAdvisor. The hostel was a convenient choice for me as I had an early train trip to Prague on my last day. The hostel is clean, and the rooms are quite spacious, too. They have a pool table, bicycle rental, luggage storage, a spacious lobby, a bar, and a souvenir shop. They’ve got a nice laundry room, too. If you’re a traveler who likes to walk, the Bundestag, Brandenburg Tor Gate, and Reichstag are just 30 minutes walk from the hostel. It’s a good value for money.