The Masonic Temple in Philadelphia

Just a stone throw away from Philadelphia’s City Hall is the Masonic Temple–in its gray boring structure–that’s how it looks outside. At least to me.

The reason why I went inside was that Ive never been to one. Ive heard of freemasons and in fact, I have friends who are freemasons themselves but they really dont seem to convince me what freemasonry is and for. I thought its kind of a congregation that we know about but we really dont know about. Know what I mean? If not, then, I cant explain further. LOL…

You cant just go inside and tour around by yourself. Before going, check their tour schedule. It cost $8. The tour lasts an hour and its not really informative as I expected it to be. Going from one hall to another, I imagined myself like having a visual Humanities class back in university–except that my professor gave me more details about each architectural style. The Masonic Temple guide was just plain boring, uninterested/ing, and….. duh.

So, this was what the guided tour like: You pay and a guide will meet you in a museum-like room where some ancient stuff are on display. At an scheduled time, the tour begins and the guide brings the tourists from hall to another. Once inside the hall, hell play a short recorded voice and visitors listen. After that, hell ask everyone if they have questions. If none, hell give them a brief moment to inspect/see parts of the hall. Theres no time for admiration. If there are questions thrown at him, hell gladly answer them briefly. No more. No less. Then, hell tell everyone to follow him to the next hall.

This Grand Staircase is made of Tennessee marble. I was speechless looking at it.

This is the Oriental Hall thats covered in Moorish style–from floor to roof. The small arches have delicate embellishment of intricate lacy design.

The Gothic Hall. I would easily spot a Gothic kind of architecture due to its prominent arches. The groins, pointed arches, pinnacles and spires appear in every part of the room. The Cross and Crown, emblem of the modern Knights Templar, hangs above the Commanders throne (a replica of the Archbishops throne in Canterbury Cathedral.) The wainscoting is of oiled pine, and all the furniture is hand-carved.

The Ionic Hall. The ceiling represents heaven. Right in the middle of the room is the representation of a noon-day sun. Surrounding it are the signs of stars and planets. In this room theres a clock that is still keeping time since 1874!

The Egyptian Hall. This is really one place that you wont have to guess when inside. It feels and looks like you are in Egypt. This room is decorated in a Nile Valley style and has 12 majestic columns that carry Egyptian hieroglyphics and paintings of Egyptian gods.

The Rennaisance Hall. Obviously, this hall is decorated in Italian Rennaisance style. That painting you see in the middle is not Jesus Christ but Moses. The ceilings and walls are filled with symbols of masonry.

The Corinthian Hall. Its obviously Greek if you look at it. It is covered with emblems of Greek mythology mostly relating to spiritual stuff. Theres is one interesting here that was shown to us by our guide: he said that the carpet was installed in 1963 and was a gift from Puerto Rico. There is a deliberate imperfection in the design of this rug. One of the corner leaves was left out, to depict mans imperfection, and to follow a Persian tradition that only God, or Allah, is perfect. 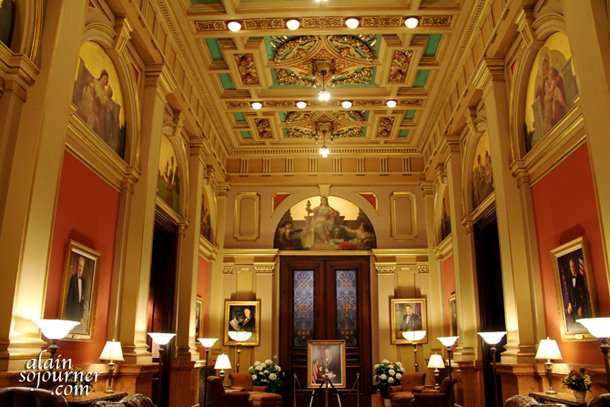 SAVE up to 46% on Philadelphia’s 5 BEST ATTRACTIONS!