The Painted Ladies of Grimsby look like gingerbread houses out of your Christmas storybook. They are not only painted in vibrant colors but also extremely decorated on their exterior. The intricately handcrafted woodcarvings will surely catch your naked eyes.

Strolling around the neighborhood feels like you are in a candy land full of sweets you’d ever want in your life! Though no candies were given or passed on to tourists like us (maybe because we’re not kids anymore 😂), we were just happy we discovered this place on TikTok.

While we were strolling and taking pictures around, a very nice couple were standing in front of their colorful house. We were hesitant to disturb their peace by asking them questions but they were smiling while we were taking photos – so we said hello.

From them, we found out that they inherited their Victorian house built in 1896! The poor mathematical part of my brain instantly blurted out, “Oh my, it’s over a hundred years old!” Later on our way home, I used a calculator and gasped, “Oh my, it’s 126 years old!”

Perhaps, for the kids, these painted houses are like life-size doll houses. I can’t blame them if they see / call them as such.

Though the houses exist since 1900s, residents only started painting their houses 35 years ago.

A Bit of History

In the 1840s, this area used to be a summer camping ground run by the members of the Methodist Church. This was a perfect place to spend summer for the kids as it was/is close proximity to the wooded beach. They started with tents, then to cottages which, at first temporary but became permanent later on.

When the area flourished, estaurants, shops, banks , gardens and other businesses started showing up. But the Methodist Church went bankrupt in 1909, an American bought the land it turned it into, guess what, amusement park! Of course, there was a rollercoaster, a casino, theaters, and more!

Today, you won’t see a thing that connects to its “amusement park” days. You can only see painted houses that stay true to their original aesthetic. Head to the heart of the park and you will find an old bell from the era.

Now that you know a little bit of its history, perhaps you’re a bit disappointed that the Painted Ladies of Grimsby was/is not a place where talented lady painters lived/live? 😊

The term ‘painted ladies’ first appeared on a book by two American writers Elizabeth Pomada & Michael Larsen. It refers to Victorian and Edwardian houses that are repainted with three or more colors to show the details of its architectural beauty.

The first row of colorful houses that were called “the painted ladies” are the ones in front of Alamo Park in San Francisco, USA.

So, if the term “painted ladies” loosely refer to a row of colourful houses – then there are many of them around the world. I’ve seen them in Elfreth Alley in Philadelphia, in Cuba, Mexico, Germany, Italy, Vienna, and anywhere.

Getting there and things to remember

If you are from Toronto, you will pass Grimsby on your way to Niagara. It’s actually pretty easy to find it on Google Map. We went around the neigborhood for a while until we found a designated parking space. REMEMBER that there are people living in these houses, so mind your manners. Don’t be that tourist that everyone hates. 😂 Be also aware of passing cars on the street and don’t step on lawns if there are signs that prohibit you from doing that.

After strolling around the hood, go and check out the beach. If you don’t fancy the cold water of Lake Ontario for now, enjoy a quiet walk along the beachside trail. 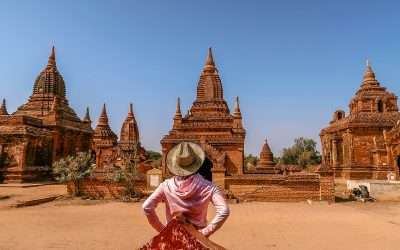 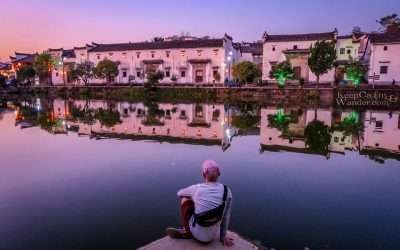 Ancient Zhuge Village in the Evening