The Natural Bridge at Yoho Natural Park in British Columbia is a wonder that will keep you wondering. It is a naturally-formed stone bridge that connects one side to the other side of the Kicking Horse River. When the ice and glaciers melt in its surrounding area, the sounds of the cascading water can be heard almost like, well, a kicking horse? 😊

The Bridge. As you can see in the photo above, the stone bridge is visible but not really that visible. Obviously, I was standing at the wrong angle! 😂 You can see that there’s a gap between two stones but the one on the left is connected from behind and then connects to the right (like a U-turn?). Thus, forming a bridge but not the usual bridge you have in mind. Nature has its own bridge design. It’s been like that for centuries – so it makes me wonder how water hasn’t destroyed it, all throughout centuries.

The River. Now, you might be wondering why is the river named “The Kicking Horse River?” It got its name from a near-fatal kick (by a packhorse) that knocked James Hector while he was discovering the area. That’s a pretty intriguing name, isn’t it? Thank goodness, they never named it after the man.

Whitewater Rafting at Kicking Horse River. If you have time and an adventurous soul, you must experience whitewater rafting here. This exciting activity lasts for 3-4.5 hours and is suitable for all levels. Next time, I’ll be around here, I’ll definitely go and throw myself out there! 😂

The Mountains. The Natural Bridge is backdropped by lush green pines and gorgeous, massive mountain peaks. It was cloudy when we were there but imagine its beauty when you could it all on a sunny day?

The Wooden Bridge. Right in front of the Natural Bridge, a wooden, man-made bridge is built for visitors to see it. You can also go down and walk on the bridge but I didn’t really see anyone attempting to cross from one side to another. Walk from end to end of the bridge until you see the “naturalness” of the bridge. I actually didn’t see its natural formation quickly (because I’m short?) until I went down there and saw it myself. 😂

On the opposite side of the bridge, you’ll find the river snaking through rocky beds and towering pines. And as you can expect, the Rockies show up from afar.

Emerald Lake Nearby. From here, you can walk to Emerald Lake. You should be there in less than 5 minutes – on foot. Stay as long as you want, but remember other people are waiting for your parking spot. 😂 Let others enjoy nature, too!

You can always go on a tour for those who don’t drive, solo travelers, and those who don’t want to move (because of gas prices). Here are some tours you can take while you are in the Canadian Rockies: 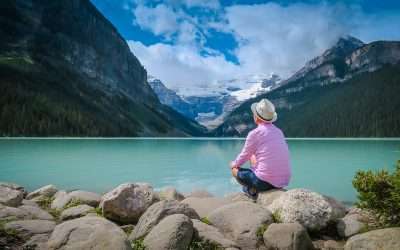 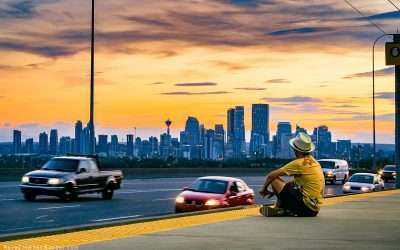 Things to See in Calgary (Part 1)