The Modern Library of Alexandria 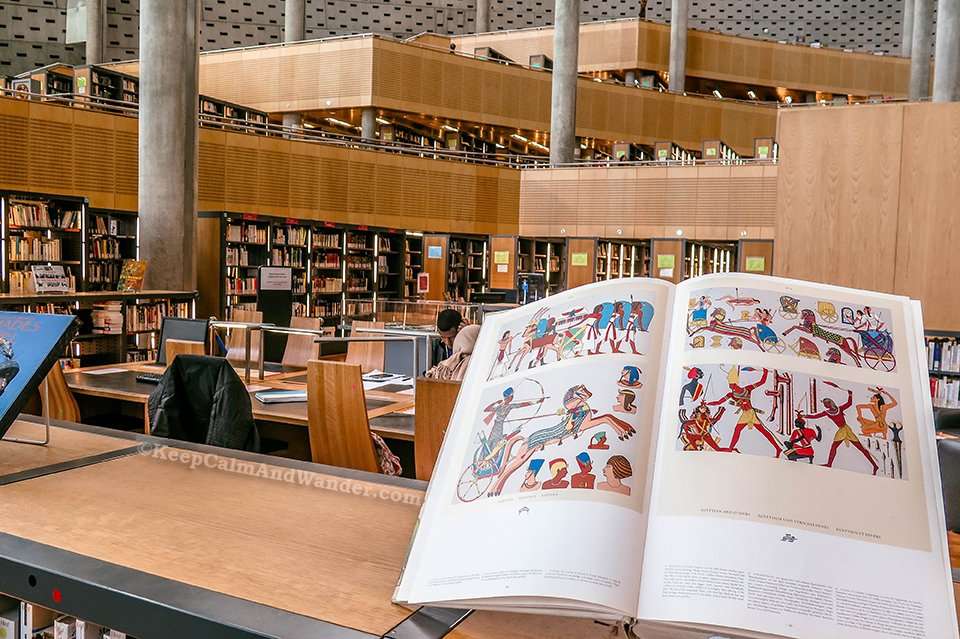 The Modern Library of Alexandria (Egypt).

The modern Library of Alexandria doesn’t really live up to its prestige in ancient times – when it comes to rare collections. There’s one surviving scroll from its ancient library in a city once ruled by Cleopatra and Alexander the Great. However, its architecture is brilliant, bold, modern and wonderfully executed. And oh boy, this is the only library in the world that I’ve been to where I paid to get in. 😀

Before you begin your self-guided tour, read this:

The new Library of Alexandria is built near where the ancient library was. Along the Mediterranean shore, the circular, glass-covered library beacons the same sea where Cleopatra first laid eyes on Julius Caesar.

The modern design commands knowledge and reflects boldness that complemented the sound of the waves that crash ashore.

Inside the modern Library of Alexandria

As soon as you get through the door scanner, you’re walking into a suspended platform overlooking the vastness of the great library itself.

Some shelves are full to their edges.

And few are waiting to be completely filled.

I went to three museums. Don’t skip the Sadat Museum and Museum of Manuscripts where you can find the only surviving scroll from time’s past.

The Great Wall of Great Arab Poets and Writers

Rumi? Check. Ibn Batuta? Check. Ok, these are only ones I know and read. 😀

I went to this Rare Collection Room but it was off limits to visitors. Taking photos inside weren’t even allowed so I went out the door and took this photo. 😀

The Library of Alexandria was once considered as the greatest library of the ancient world. It was also called as the world’s first seat of learning where great historians, writers and poets came to visit, study and research. It literally was the collector of world’s knowledge.

It was in this great library where Archimedes invented the screw-shaped water pumped which we still see and use today.

Geometry – that high school subject most of us hated was born here. We all have Euclid to blame that. 😀

In Alexandria, Ptolemy wrote the Syntaxis Mathematica (or Almagest) which became the most authoritative book about he nature of the Universe for 1,500 years!

What happened to the ancient Library?

There are many versions of the story as to what exactly happened to the ancient library.  But, one of the versions says that it was Julius Caesar who ordered the burning of the library as part of his strategy to overthrow the city.

Trivia: Marc Anthony said to have given Cleopatra 20,000 scrolls as a wedding gift. None of those survived during the burning of the ancient library.

If you are a student with a valid ID, show it and you’ll get an entrance fee discount.

Related: The Roman Amphitheater in Alexandria