Chichen Itza was once the center of the Mayan universe. It’s an ancient city once occupied by brilliant Mayans who invented the calendar and were keen observers of the stars. They were amazing astronomers that they could predict solar and lunar eclipses by just looking / observing the movements of the stars in the dark sky. How brilliant is that without the gadgets of modern technology that we have nowadays? Its size, history and architectural wisdom makes it as one of world’s Seven Modern Wonders.
It’s the second modern wonder I’ve been to (after the Great Wall of China). Loosely translated, Chichen Itza means “At The Mouth of The Well of Itza.” At least that’s what our Mexican driver told us. 🙂

Just like any ancient architectural wonder, Chichen Itza is buried with secrets of ancient Mayan civilization. Unlike the pyramids of Egypt, the apex isn’t pointed up to the heavens. It is flat. Surrounding this gargantuan structure are other small structures used in rituals of worship, sports and important gatherings. Hiring a guide cost us $65 but it was worth it. Manuel, our guide, has been doing his job for 35 years and counting. When he introduced himself, he reminded us that it’s not chicken pizza, but Chichen Itza. He is very knowledgeable and showed us old photos of the Kukulkan Pyramid (a.k.a. El Castillo), the most beautiful and the biggest pyramid of all the Mayan pyramids in the Yucatan State. 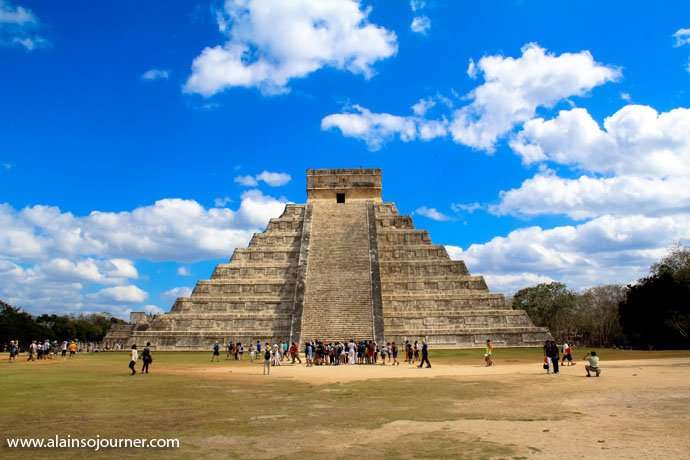 The pyramid has 91 steps in each side, thus, comprises of 364 steps, and including the platform on top, it totals to 365, the same number of days in a year. It has a steepness of 45 degrees. 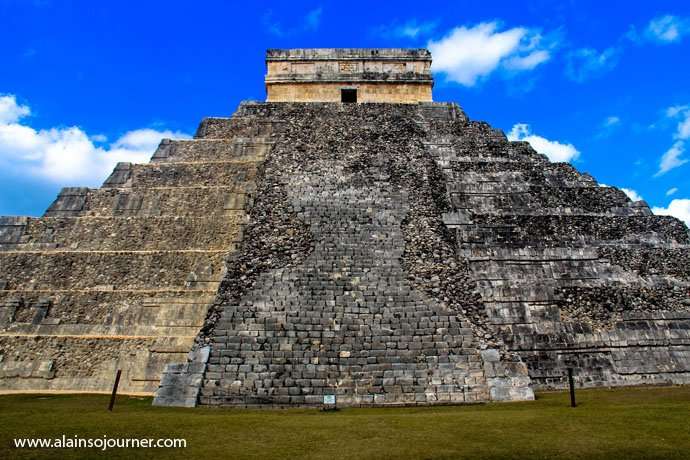 What’s inside this gigantic structure? It’s another pyramid! 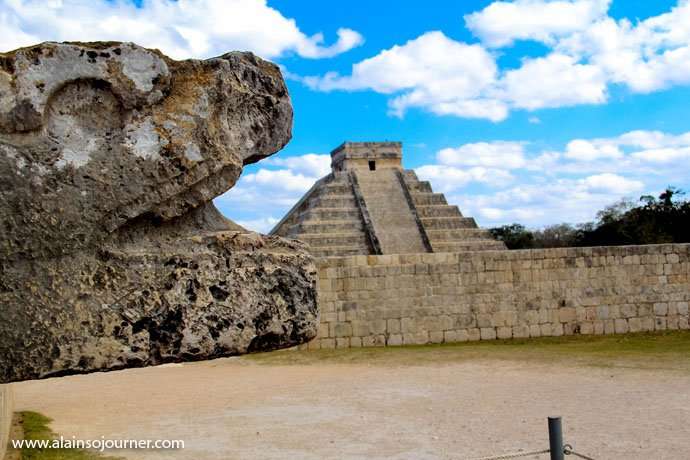 In ancient times, Kukulkan Temple / Pyramid was used for astronomical purposes. Even today, there’s a huge celebration going on during Spring equinox (in March) and Autumnal equinox (in September). The Mayans who live around the Yucatan would gather in this temple and do their rituals as passed on from generation to another. 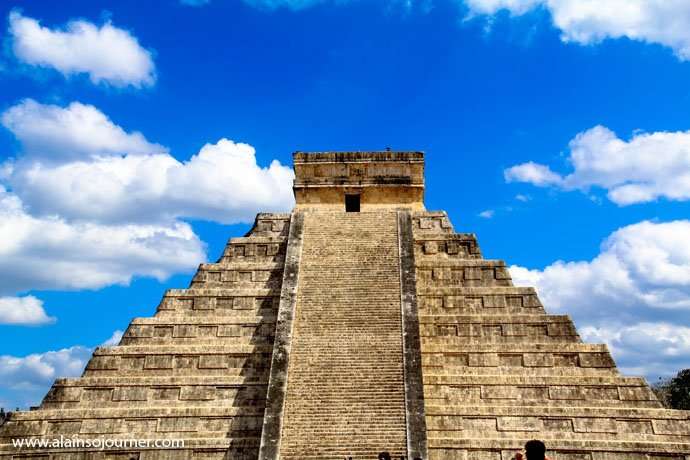 Visitors used to be allowed to climb these steps—until 2006. But due to accidents (some were fatal) and vandalisms of disrespectful tourists (those Spring Breakers, probably), the government decided to close it to public. So, now, every visitor would just look up, admire it’s grandeur and wish he could conquer it to the top. 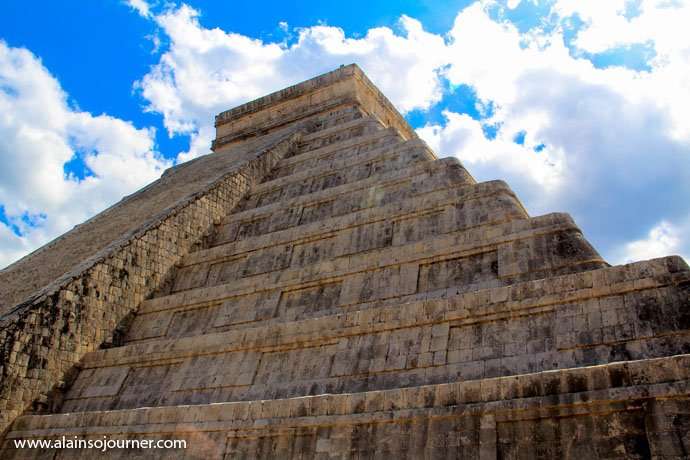 If you stand facing the pyramid and clap your hands into a pattern of rhythm, there’s some kind of eerie respond from the inside. It’s kind of a bird’s chirp. It’s amazing but at the same time strange, too! 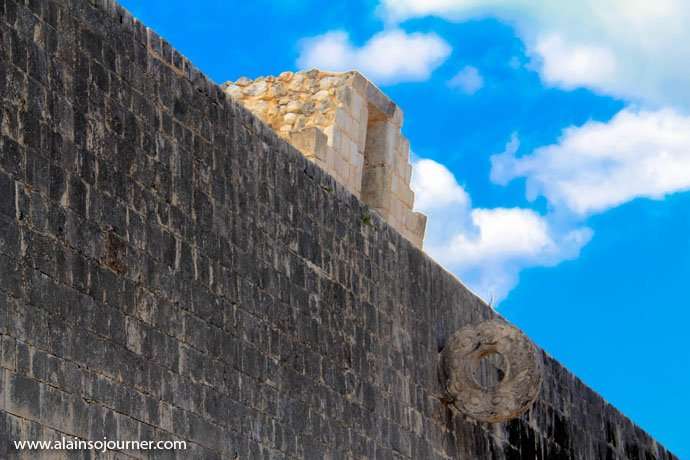 The Ball Court
This spacious court was used for sports events. Competing players have to shoot a rubber ball in this circular hole (above) attached to a high wall. Losers will be, as expected, beheaded.
The Temple of the Warriors
These columns are surrounded with carvings of the warriors. In ancient times, The Temple of he Warriors was used to welcome delegations from different communities for an important rituals and gatherings. 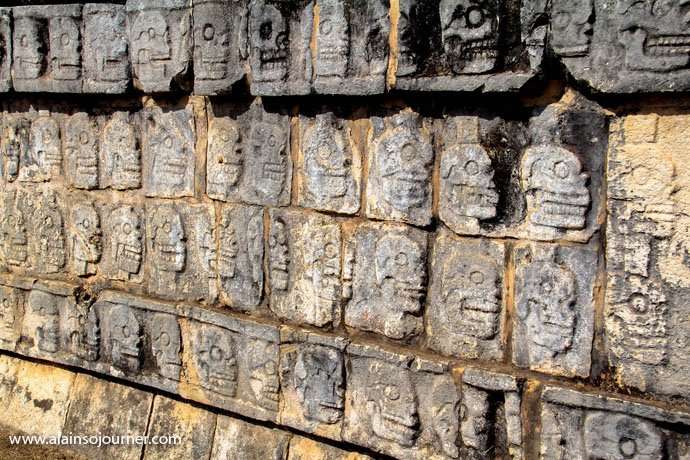 The skulls. Every time, a human life was sacrificed, the Mayans carved their victim’s skulls in these stone walls. There are about 900 of them preserved. 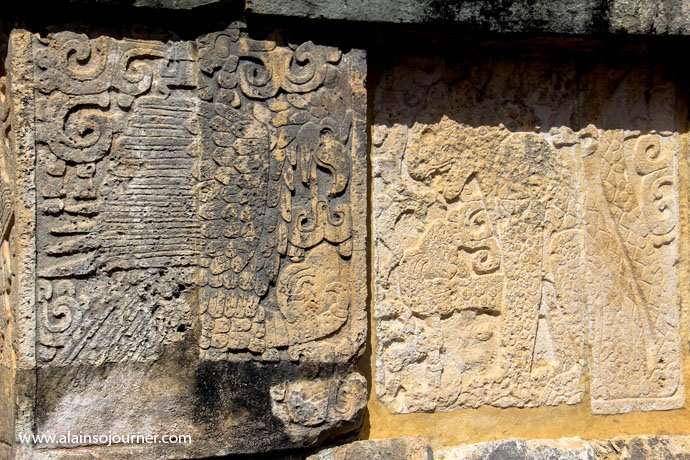 The falcon with a human heart / eagle
If you look a closer look what do you see? Do you see a falcon holding a human heart? Do you you see an eagle ready to grab such heart? 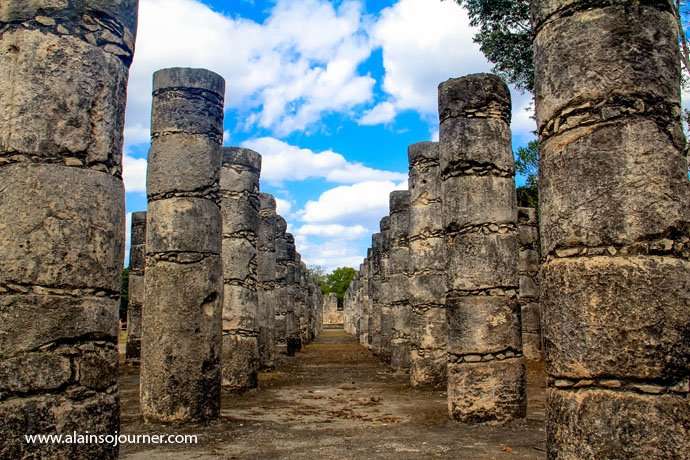 Tripod use is not allowed. If you insist, you will need to obtain a special permit from a government office and pay more than 8,000 Mexican pesos. Now, that made me wonder the low brilliance of the Tourism honchos. Our guide told me (only me who had a tripod) that video recording using a tripod is not allowed. That’s it—and no further explanation. But, yes, you can video record anything inside– just without a tripod. Really? What difference does that make aside from the most obvious reason: it keeps you camera steady? My camera is not even a pro and the tripod is way skinnier and shorter than those legs of Victoria Secret’s models!

Save up to $500 when you book a Vacation Package! 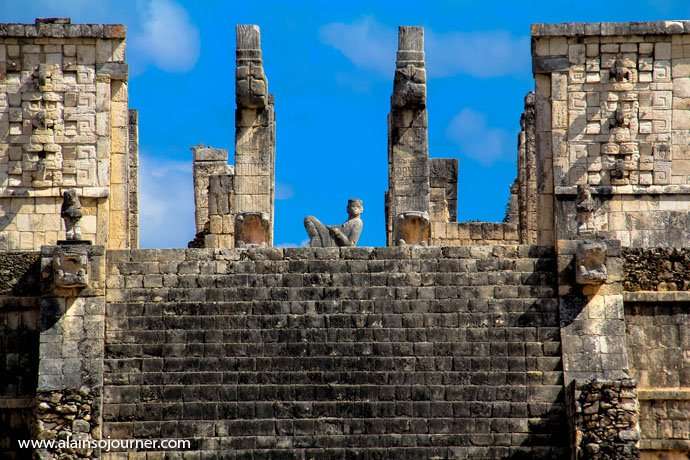 Buy something.
There are crafts sold by mostly Mayans in and around Chichen Itza. And hey, the are awesome crafts, too! By the look of it, that’s their only source of income. The good thing about them is that they’re not pushy vendors. They will call your attention and smile and ask if you want to buy something—-and nothing more. Haggle but make sure you are reasonable. No matter how small the thing you bought, it will surely make them happy. 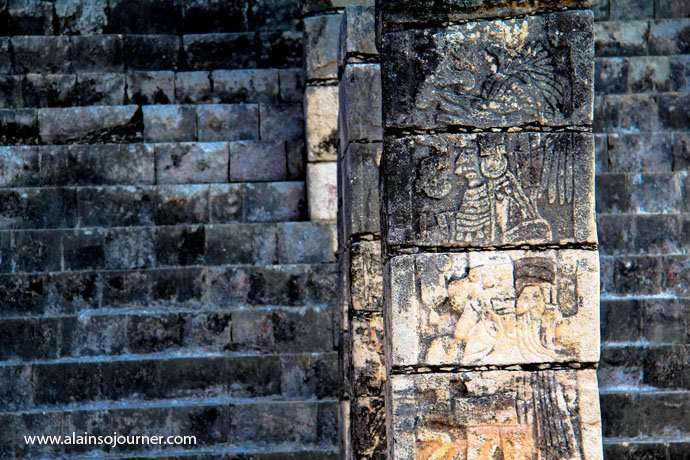 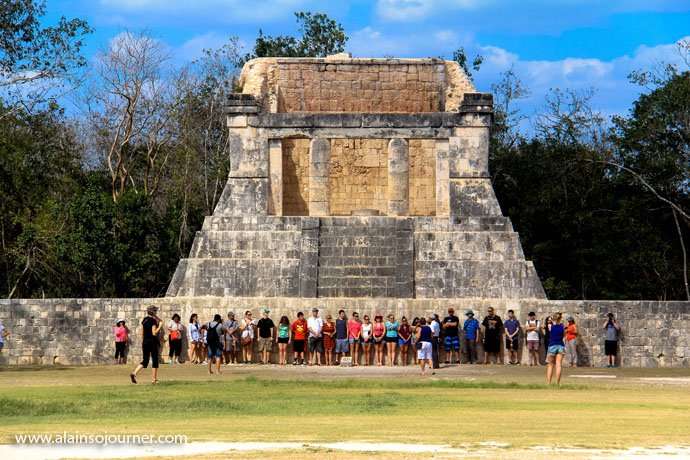 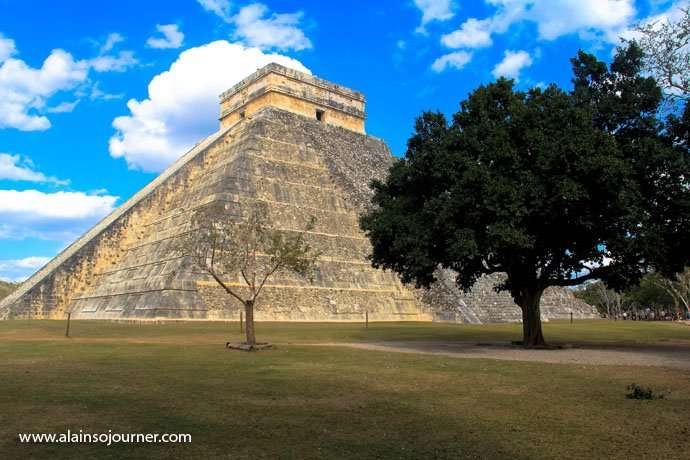 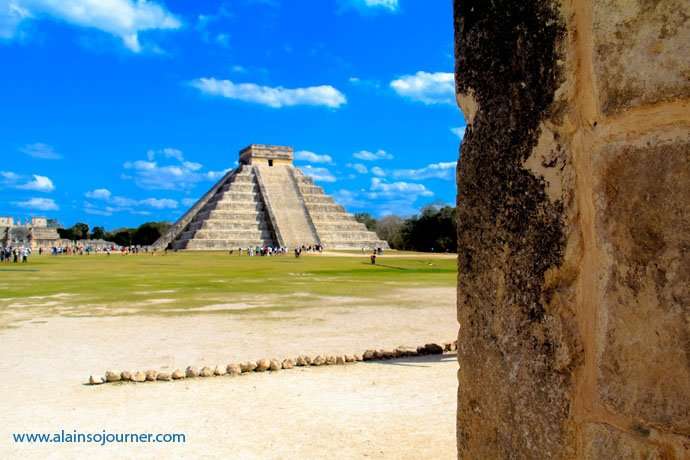 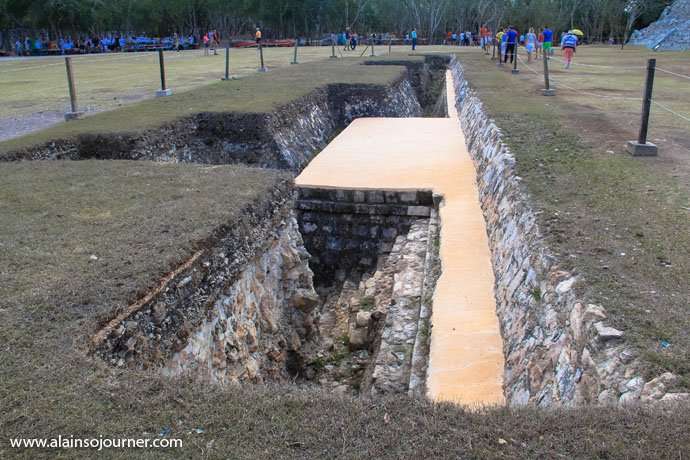 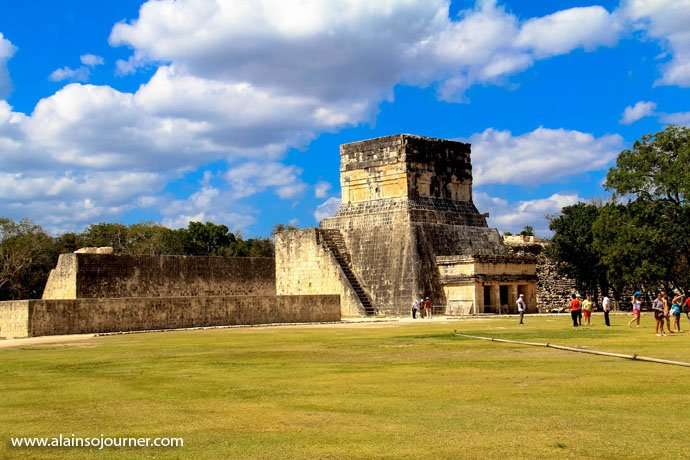 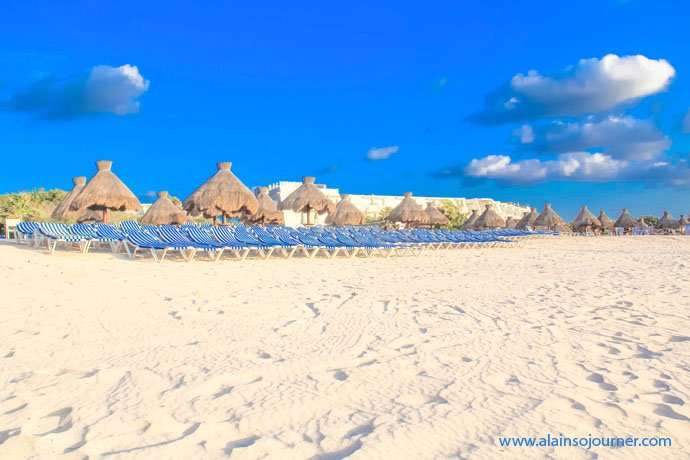 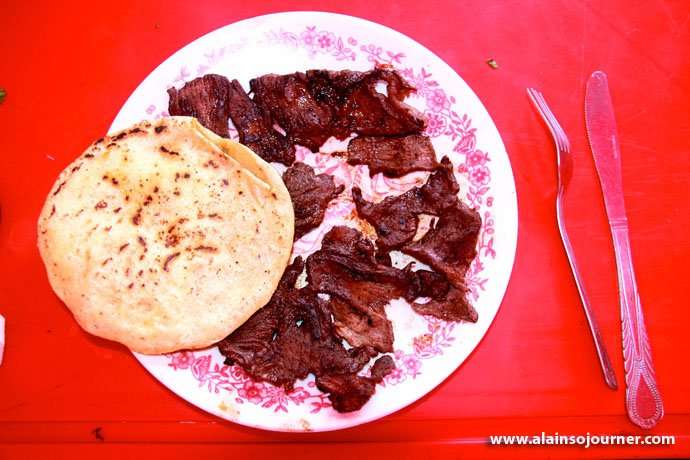