These Meteora Monasteries are Hovering in the Air 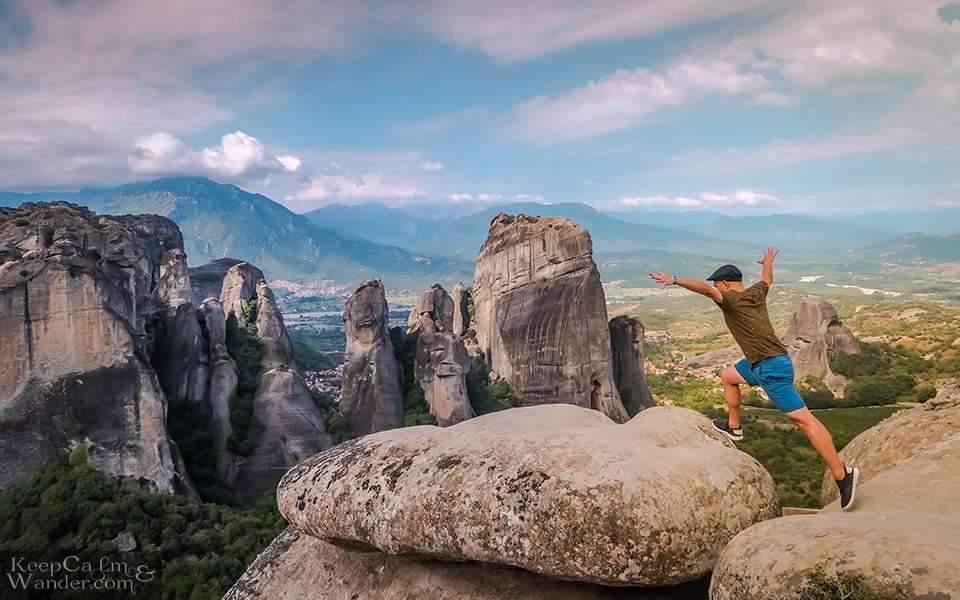 These Meteora Monasteries are Hovering in the Air (Meteora, Greece).

These Meteora monasteries are hovering in the air. On our way to see these monasteries, our jaws dropped as we passed by the towering rock formations. They are amazing geological formations that will never fail to make you wonder how they came into existence. While these are marvels of nature, the monasteries on top of these rock pillars are themselves, marvels of human ingenuity. I declare that these natural and human-made wonders are one of the attractions that you have to see, to believe.

Who Built these Monasteries?

Meteora’s first Christian monks set up their monastic life here back in the 14th century. They constructed monasteries on top of these gigantic rock cliffs that must have been very difficult to climb. But, I guess, that was the point of putting these monasteries up there – to get away from worldly temptations and possessions. And by looking at them, I have no doubt that the monks succeeded in their mission to practice their faith without much distractions from the outside world. They would do everything to live in unreachable places just to experience (or, maybe see?) God in their lifetime.

If you wander your eyes around and see these monasteries sitting atop the rocky escarpments, you would really think they were so impossible to reach. Also, thinking of how they carried all the construction necessaries must have been back-breaking labor that is hard to imagine. There are 24 monasteries built on top of rock pillars but only 6 are accessible. And one of these 6 is familiar – if you have seen James Bond movie, For Your Eyes Only.

The following are the monasteries of Meteora. I won’t go into details because each of these monasteries deserves a separate blog post. They need to seen and admired from inside and outside.

1. The Great Monastery of Meteora

This should be your first stop. Sunrise views from here are amazing and photogenic!. The Grand Monastery (Monastery of ) is the oldest and the largest of all the monasteries in the area. Be there when it opens at 9 o’clock.

Named after the first monk who constructed this monastery, its position on a pillar will really make you wonder the engineering genius of the Varlaam.

Roussanou Monastery was built in 1545 by two brothers, Maximos and Joasaph. But, in 1988, this was converted into a convent for women – as it is until today. Though you can go inside, photography/camera is off limits.

Holy Monastery of St. Nicholas Anapafsas dates back from the 16th century. When inside, look up and down through the frescoes of Christ and Mary.

Dating back from the 14th century, the Holy Monastery of St. Stephen is the closest to the town of Kalabaka. Nowadays, nuns live here and they are famed for their social action causes.

We never had the chance to go here because the bus schedule was unreliable. We waited for almost two hours, but nothing came. A piece of exciting information about this monastery is that it was used in a 1981 James Bond movie, For Your Eyes Only.

Where and how to get to Meteora from Athens

From Athens, take a train to , the nearest town to Meteora. From , hire a taxi to take you to all 7 monasteries. This is, of course, the most expensive way. However, if you plan to stay there for a night and two full days, taking a bus is your cheapest option. Be aware of the bus schedules though because it can be very frustrating to wait for nothing.

Meteora in One Day

It is possible to visit Meteora for a day. That’s how we did it. We took the train from Athens at 11:55 PM (yep, almost midnight!). We arrived at Kalabaka at 5 in the morning. Since it’s a small town, so everything was quiet at this ungodly hour. We crossed the train station and found a bakeshop/cafe. We had our morning coffee there and our little breakfast. It was the server who told us to better take a taxi to the Holy Monastery of the Great Meteoron (aka, Grand Meteoron). Twenty minutes before sunrise, we found a taxi, negotiated the price and we both agreed 10 euros. We could never thank the server enough for giving us the tip on how much we should be paying.

Read the detailed itinerary of our One Day Trip to Meteora.

It was a 10-minute drive to the top – and the driver was nice to point us the spots where to take beautiful photos.

While it is possible to see Meteora in one day, I’d still recommend a night stay here. Especially if you’re taking sightseeing slowly. Stay in Kalabaka town where you can find a few hotels and guesthouses. Some of these hotels have tour buses which take you to all monasteries. These two accommodations are a good start: Dellas Boutique Hotel and Hotel Doupiani House.