In Thailand, Jim Thompson House is and was the house dubbed as “the talk of the town”.

Back in his heydays, Jim Thompson was a well-known American who settled in Bangkok and made Thai silk famous by founding a Thai Silk Company in his name. With his huge contribution to the country, he was called, “The Legendary American in Thailand.” He was even bestowed the highest award given to farangs (foreigners) for their contribution to the country. In 1967, Jim Thompson disappeared in a jungle in Malaysia–and never found.

His house in Bangkok, however, was taken cared of and considered a national treasure for its display of traditional Thai architecture, which is a mix of Khmer, Chinese, Burmese and Indian influences. The wood carvings everywhere, the symbols on the doors, the gardens, the structure and the rooms are filled with uniquely Thai designs. Mostly made up of teak woods, the whole house itself is a museum of times past. Though not as big as the royal house, but one can sense the luxury of the place in its glory era.

The entrance to Jim Thompson House Museum. Looking for the address itself was a challenge for people who are poor at directions–like me. LOL…

The pool makes the backyard serene and inviting.

This is where I sat for half an hour to enjoy my junk food snack.

Students hanging out under the structure. I don’t understand why they have to put those ceiling fans in an outdoor setting.

Look at that grand staircase made of teak wood. It’s still shiny after all these years!

Anyone could imagine himself sitting here with his favorite book.

In one of the halls.

And this is where you purchase the finest Thai silk. 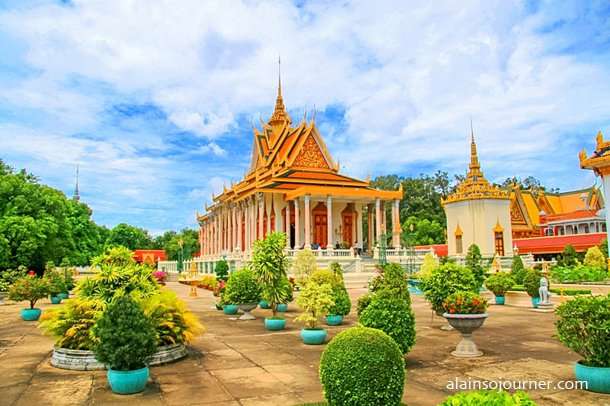