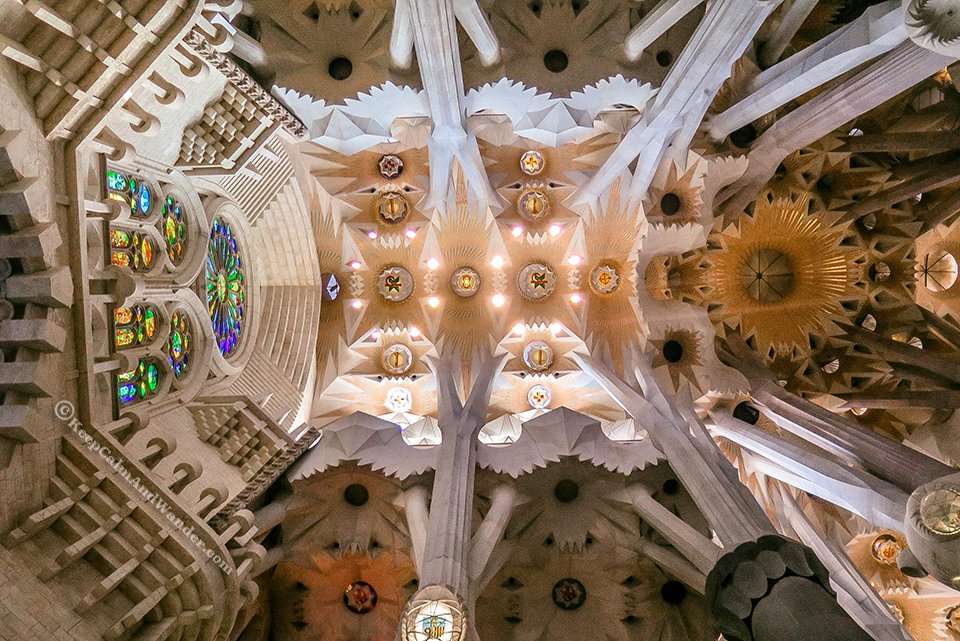 There’s no doubt that Sagrada Familia in Barcelona is Antoni Gaudi’s most ambitious and most celebrated work that’s waiting to be completed. Though the artist had died long time ago, his vision of the church lives on. Construction is still going on but it’s getting to the finish line. After 134 years of construction, the world will be able to see the spectacular Sagrada Familia in its entirety soon.

For now, there’s nothing much to see inside for a regular tourist like me. While I was there last summer, the central part of the church was wholly covered. It was disappointing, especially if the entrance fee was excessive. In Barcelona, everything that has Gaudi trademark on is expensive. You could feel Spain’s economic crisis. The struggle is real. 🙂

Since I’m not a hardcore Catholic, the only thing that fascinated me is the architecture in itself.  Looking up, I was blown away by the complicated, intricate and beautiful structures of its columns to the roof. I was literally blown away. It’s the same feeling I had when I first set foot on the Great Wall of China or when I witnessed the first break of dawn at the summit of Mt. Sinai. I had goosebumps and I had no one to talk to or share that feeling – a disadvantage of travelling solo.

1. From outside, you’ll see these towering spires or towers. There are 18 of them which represent the 12 disciples, 4 gospel writers, the Virgin Mary and Jesus Christ (the middle tower).

3. The Pyramids of Egypt took only 20 years to build but this church is still under construction even after 134 years. They said that they’re hoping to have it completed in 2026, Gaudi’s centennial death anniversary.

4. Antoni Gaudi, the chief designer, is buried in the crypt below the church.

5. This place of worship was originally planned as a church, but they decided to make it into a cathedral. Then, in 2010, Pope Benedict declared it as a “mini-basilica.”

6. It is the most visited tourist attraction in Spain with 2-3 million tourists a year! It’s a UNESCO World Heritage Site since 1984.

7. There’s an elevator inside that goes to the top of one of the towers. I’ll show you the view from there in the next blog post.

8. When the construction is finished, it will be Europe’s tallest Cathedral.

9. Do you know that there used to be a school here? It was built for the children of the construction workers.

10. This church has three facades: The Passion Facade, The Glory Facade and The Nativity Facade.

Travel Tips:
I would advise anyone to buy your ticket online ahead of your visit. It’s not guaranteed that you”l be able to get a ticket on the time you’ll get there. I went there at 9 in the morning but was told to go back at 2 in the afternoon because that’s the earliest time slot available for the day. They had to control the influx of tourists in the summer to avoid overcrowding.

With so many things to do and places to see, Barcelona can be overwhelming for a visitors. If you’re a kind of traveler who doesn’t like taking public transport and long queues at the ticket booth, I’d recommend you buy Barcelona Pass. This pass will take you to places that you shouldn’t miss in the city. Click here and see how much you can save.

I stayed in these two hostels in Barcelona: Urbany Hostel BCN Go and TOC Hostel Barcelona. I’d recommend both. They’re in good location and very accessible to the metro. There are also shops and restaurants all around the area. However, when it comes to comfort and amenities, I’d prefer TOC Hostel because the rooms are spacious and beds are sturdy. They have nice cafe and swimming pool, too!