This post, How to Explore the Pyramids of Egypt on Foot, is your guide on how to maximize your time inside the pyramids area. And of course, how and where to take great photographs.

Though Egypt’s tourism has experienced a big slump in the past years, the Pyramids of Giza have no shortage of visitors every day. There are more local tourists going in (mostly students on one-day excursions), and only a few are foreign travelers going around and about the pyramids—on foot. Most foreign tourists come in the comfort of their aircon buses, taking them from one place to another.

If you’re adventurous enough and you’re traveling with friends or alone, there’s a way to beat the crowd: don’t follow where most of them go. Make a detour.

Question: Can you explore the Pyramids on foot?
Answer: Yes, dear! Of course, you can!

There are three things, however, that you need to bring: a hat, water, and a few chocolate bars or some nuts. And oh, wear shoes, not sandals or beach flip-flops.

Related: A Hotel Room with a View of the Pyramids

How to Explore The Pyramids of Egypt on Foot

They open at 8:00 in the morning, so, you better be there when the ticket booth opens. The entrance is the tiny door on your right. There are many touts who’d convince you for a horse or camel ride while waiting, but be firm and polite in saying, “No, thanks.” With a smile. 😀

Start at the Sphinx.

You have to know that the Sphinx area is fenced, thus, you have to enter via the entrance with a lone guard sitting to check your ticket. This is not for everybody. Most local tourists don’t go inside (the students on excursions) because they have to pay a bit more. Most of them go directly to the Pyramid of Khafre (the middle pyramid). Take the separate exit door when you’re done.

Do not follow the crowd to the Pyramid of Khafre.

When you exit, take a few steps heading to the middle pyramid. Then, on your left, there are ancient ruins that are not cordoned off, so you can freely explore them. Walk among these ruins and follow your curiosity. Be careful: some dugouts here are uncovered. They’re deep and once you fall, good luck surviving. 🙂

Walk further on your left, going to the direction where the Pyramid of Menkaure is (aka, the smallest Pyramid).

Though it is tempting to be near the Pyramid, just don’t do it yet. Walk/explore at your own pace. Your destination is the smallest pyramid first because that’s where most visitors don’t go. Believe me, when you arrive there, you’ll be the one exploring it.

Go to the hill.

There’s a hill right in front of the three small Pyramids (they are a few steps next to the Pyramid of Menkaure). This hill has some kind of small post that is visible from the three pyramids. Go there and be awed at the awesome view of the Pyramids with Cairo in the background! (Look at the pic above).

From the hill, do not walk on your left.

Facing the Pyramids, you will see busloads of tourists on your left. Since it’s mid-morning, I won’t recommend you to go there not because it’s crowded but because you are facing the sun there and it’s not good for photography. This destination is good at sunset time.

From the hill, walk on your right.

Once you got over the feeling of euphoria, walk to the smaller hill on your right. This is where you can see the most breathtaking views of the three big Pyramids and the three small ones. (See the photo above.) I spent my longest rest here because, obviously, I couldn’t get enough of the panorama of the last remaining ancient wonder of the world. I had goosebumps while resting here and I hope you’ll experience the same feeling I had while drinking in the incredible views I only once dreamed about.

Walk down the hill and start seeing the Pyramids up close and personal.

It’s hard to leave from here—but you have to. The sun is baking your skin and you gotta get to know the pyramids up close. Head down to the small pyramids and wonder more. Walk on the left side of it to reach the Pyramid of Khafre where you are allowed to climb some steps up but not all the way to the top. There are guards watching you. Here, you’ll be together with thousands of tourists taking photos—from selfies to jumping photos; from camel rides to that quintessential pose: extending your arms up, closed fingers stooping down—to give an illusion that you’re holding the tip of the pyramid.

Optional activity: You can go inside the Pyramid for an additional fee.

After that, explore the first and the biggest pyramid. Then, take your exit when you’re done. It took me close to four hours to explore the Pyramids on my own.

Accommodations in Giza with a View of the Pyramids 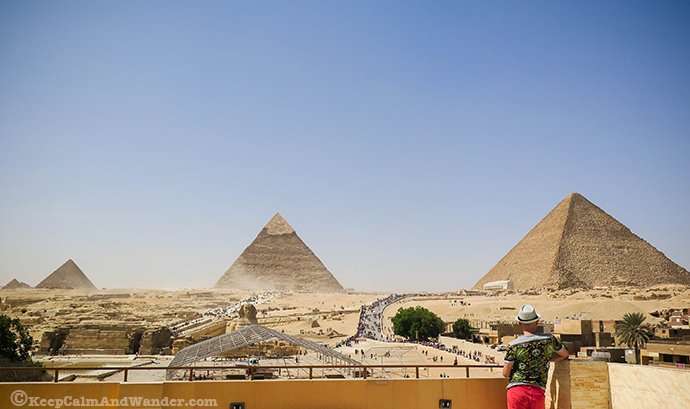 Sphinx Guest House – Room with a view of the Pyramids 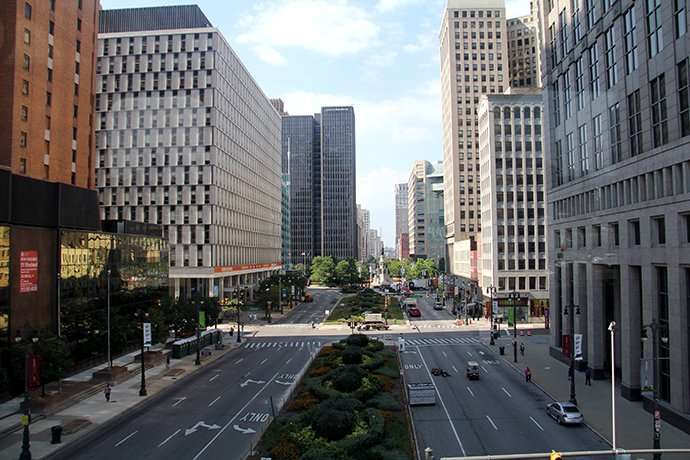 Hipmunk Hotels: Midwest Hotels With a View in Wichita, Detroit, and More