My early flight from Dubai was on time but the connecting flight in Cairo to Casablanca was delayed for an hour – because it’s EgyptAir.

From Mohammed V Airport in Casablanca, it was very easy to find the train that goes to downtown which lasted for 40 minutes up to the last station, Garre Casa de la Portes. The train station was clean and it’s got Starbucks, McDonalds, ATM, and a host of small restaurants and boutiques.

Going to Hotel Azur wasn’t a hard struggle with taxi drivers – a good thing about traveling during Ramadan. There were very very few of them there. The first (and only) taxi I got insisted on a $10 flat fee but I was stubborn and insisted on a worn out meter to be turned on. It only cost me $4.

As soon as I checked in, I decided to explore the streets of Casablanca all the way to Hassan Mosque. That’s 4 kilometers of walking along the Atlantic Ocean.

When I finally reached Hassan II Mosque in late afternoon, the sea wall was filled with children and the men were busy setting up their fishing gear. 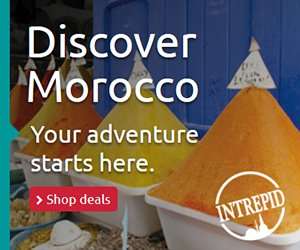 Its claim to fame is the Hollywood classic of ill-fated lovers separated by war. The film, Casablanca, wasn’t really shot in here – not one scene even. It was filmed in the comforts of Hollywood studios.

Today, Casablanca is the economic powerhouse of Morocco. As the nation’s financial capital, it is the face of modern Morocco. The streets are clean (the ones I’ve been to) and colonial buildings abound. There are no skyscrapers but progress is evident.

There’s nothing much to do here for the tourists. Hassan II Mosque is the only one that locals would be proud to recommend. If you’re a party animal, you’ll love the nightlife Casablanca offers. The corniche is teemed with outdoor cafes, restaurants, bars, clubs and sisha cafes by the beach.

And if you really like the movie, Casablanca, head out to Rick’s Cafe which has interior decors inspired by the movie. And as the night gets old, a man hits the piano and sing “As Time Goes By” – just like in the movie.  They even have a room where you can watch the movie over and over again.

For a day and a night, it was enough for me to see the city but not enough to experience it. Meeting the local couchsurfers in Casablanca, I’ve learned that Casablanca can be my kind of a city.

Hassan II Mosque is Casablanca’s famous landmark. There’s no doubt about it.

It is the 3rd largest mosque in the world.

Its minaret is the tallest in the world, standing at 210 meters.

The mosque can accommodate 25,000 pilgrims and 80,000 more worshippers outside / around it.

Hassan II Mosque sits on a rocky part of the Atlantic Ocean.

It is designed by a French architect, Michel Pinseau.

You can take a guided tour inside the mosque at different times of the day.

Make sure that you are dressed properly. Cover your flesh – shorts for men aren’t even allowed.

Take a look at every design you see inside and outside the mosque.

They’re all interesting. I love the doors. 😀

If you take the tour in the morning, you should come back in the afternoon for the breathtaking sunset.

At night, the mosque glows embers of gold.

WHERE TO STAY IN CASABLANCA

Where to stay in Casablanca
I stayed at Hotel Azur and I like it.