The Great Monastery of Meteoron is the highest of all monasteries built in Meteora. These monasteries sit on top of towering rocks that were impossible to climb. As they say, it is a herculean task to get up in these monasteries that look like they’re “suspended in the air.” But, nowadays, stairs and bridges are built to connect these monasteries from the “mainland” road.

There are around 20 monasteries in Meteora.

Unfortunately, only 6 are accessible – and as I was told, the others are still unreachable.

The Grand Monastery of Meteoron is the biggest of all monasteries.

It stands tall on Platýs Líthos rock which is 615 meters above the sea level.

In ancient times, the monks commuted by using a rope connected to the mountain across it. Then, they got into a huge basket and pull themselves, crossing a deep ravine below. It’s like our modern cable car nowadays, but more perilous.

Today, this monastery is accessible via a small bridge and series of 320 steps.

Turn your back as you climb the steps – and you will see the wondrous, breathtaking beauty of Varlaam Monastery.

Going inside the Great Monastery of Meteoron is your window to how the monks lived their simple life.

In one room, you can find primitive tools they used to build their refuge.

Don’t miss seeing the blackened kitchen (from smoke), and take a closer look at the tools they used for cooking, like the unique bread oven, wine barrels, and a cellar.

Of course, the 16th-century frescoes adorning the main cathedral of the central courtyard is another level of beauty that you have to see.

This cathedral might be tiny but its historical significance is important in the Greek Orthodox Church.

Inside, you can find a museum, too.

It is at the northern part and has some of the beautiful wood-carved crosses and some of the old and significant religious manuscripts.

Before you exit, have a rest at the little courtyard and enjoy the spectacular and gratifying view of the valley. I’m hoping you don’t have vertigo.

Interestingly, find the sacristy where the skulls and bones of old-time residents have been neatly placed here.

Where to Stay in Meteora

While it is possible to see Meteora in one day, I’d still recommend a night stay here. Especially if you’re taking sightseeing slowly. Stay in Kalabaka town where you can find a few hotels and guesthouses. Some of these hotels have tour buses that take you to all monasteries. These two accommodations are a good start: Dellas Boutique Hotel and Hotel Doupiani House. 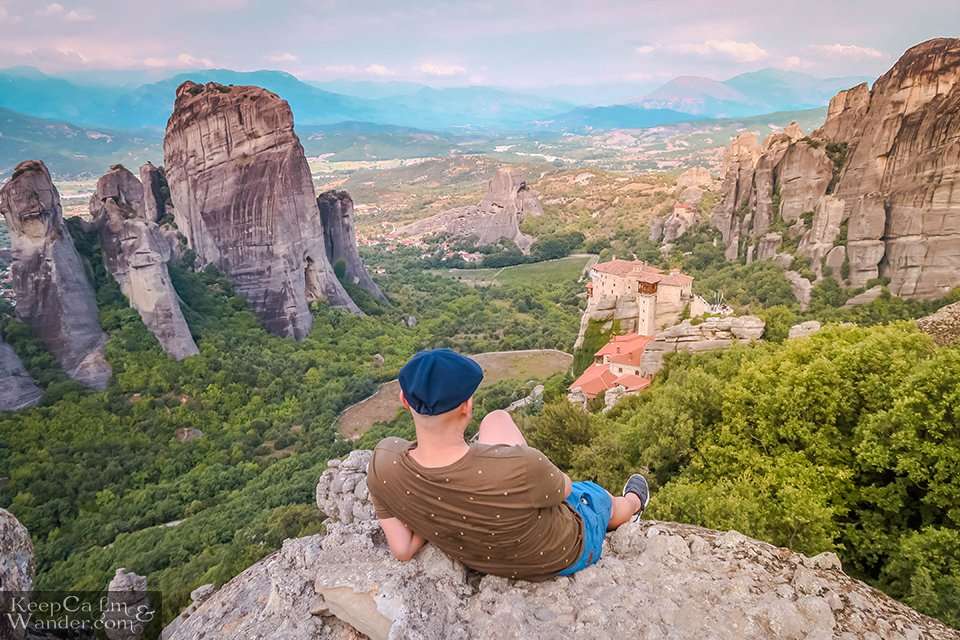 Meteora in One Day from Athens – A Travel Itinerary