Arizona isn’t cheap if you don’t drive. The State isn’t made to be backpacker-friendly. Getting a bus in Southeast Asia is way easier than going from one city to another in Arizona.

However, if your ultimate destination is ONLY the Grand Canyon, then, you can, for sure, save a lot money. But since you’re already there, why not explore other breathtaking and amazing sights the State can offer? That’s exactly what I did—and it came with a price, of course! ?

I had three weeks off but I choose to explore Arizona in 12 days only—because I couldn’t afford. ?

PHOENIX
Let’s say you’re flight lands in Phoenix. There’s really not much to do in Phoenix if you don’t drive. It’s weird to walk alone on the street, especially at daytime when the scorching heat is at its peak. And even if the weather is tolerable for a walk, it’s very rare to see someone walking. Yes, there’s a bus service but don’t rely on it. It’s only on selected routes and doesn’t really come frequently. 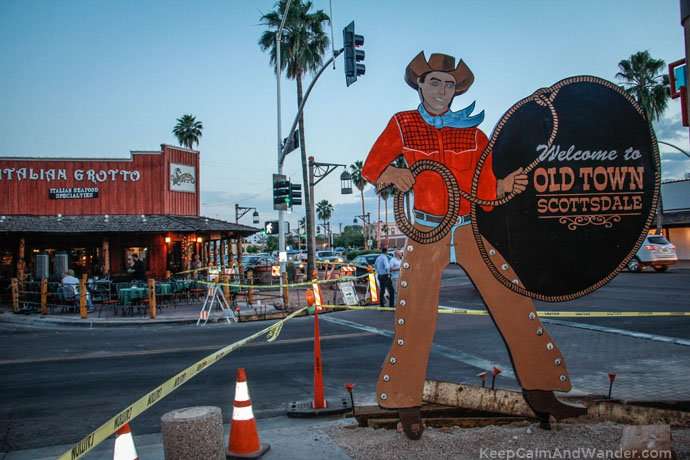 Things to do in Phoenix:
The Old Town Scottsdale on the east side of Phoenix is an interesting mini replica of the Wild Wild West. Here you’ll find cowboy boots and clothes, souvenirs, jewelries and other products made by the native Navajo Indians.

I’ve never been to a Desert Botanical Garden before so I went. It’s a pretty interesting garden where you’ll be amazed at the many (like hundreds) kinds of cactus and other plants that grow in the desert. I’d highly recommend you to visit this.

If you got more time, take a day trip to Apache land trail where you can find the Goldfield Ghost Town. No, there’s no ghosts there. But, you’ll find Elvis Presley’s Chapel where his movie Charro was made. You can go down to an old mine, take an old train and visit a mystery house, etc…

I explored Phoenix with friends I’ve never seen for 13 years, so they drove me around. I’m lucky, right? 🙂

Where to stay in Phoenix:
Stay at CamelBackpackers International Hostel.

Transport
When you’re done with Phoenix, take the Arizona Shuttle to Sedona.
Greyhound doesn’t go to Sedona from Phoenix but it goes to Flagstaff.

Warning: Sedona is not cheap nor a backpacker-friendly destination.

I made a mistake of staying here for a night. There’s no hostel in this city dubbed as America’s most beautiful city. The cheapest accommodation I could find in downtown was Sedona Motel—and it cost me $153 (including tax) for a night. Yes, I found a $59 accommodation but it’s so far from the places I wanted to go. Sedona has NO bus service. 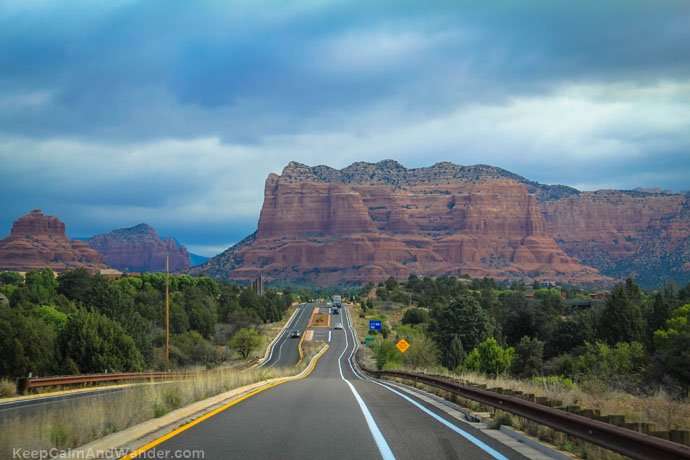 Entrance to Sedona, America’s most beautiful city. / From Phoenix to Grand Canyon: Tips for Backpackers.

What should I have done?
I should have gone directly to Flagstaff from Phoenix via a Greyhound bus. From Flagstaff, I could have joined a day tour to Sedona for $50. I could have saved money.

Where to stay in Sedona:
I stayed in Sedona Motel which is in downtown area. It is few minutes walk to Uptown Sedona and the art district.

There is NO hostel in Sedona.

Things to do in Sedona:

Join a tour
That’s the only thing you can do, unless you’re willing to walk the interesting sights in the city. I’m telling you, they’re really far from each other. Try hitchhike get though. And good luck if a kind stranger in a car would open his door.

In uptown and downtown (they’re so close to each other) Sedona, you can find tens of tours you can choose from. It all depends what kind of things you want to see and do.

Go hiking
There are many hiking trails in Sedona. I really wanted to hike the Devil’s Bridge but unfortunately, the weather was against me when I stayed there for a day and a half. It was pouring.

Transport
There’s a bus that goes to Cottonwood, a town outside Sedona. It doesn’t really go around the city, so it doesn’t do any good for tourists / backpackers.
From Sedona to Flagstaff, take the Arizona Shuttle again.

It’s really just a small city. From East to West, you can drive it for 15 minutes or less. The north and south part of the city is sliced by Route 66, America’s mother road that connects Chicago and Los Angeles.

Flagstaff is a good base to go to the South Rim of Grand Canyon, Antelope Canyon, Horseshoe Bend, Sedona and Monument Valley. 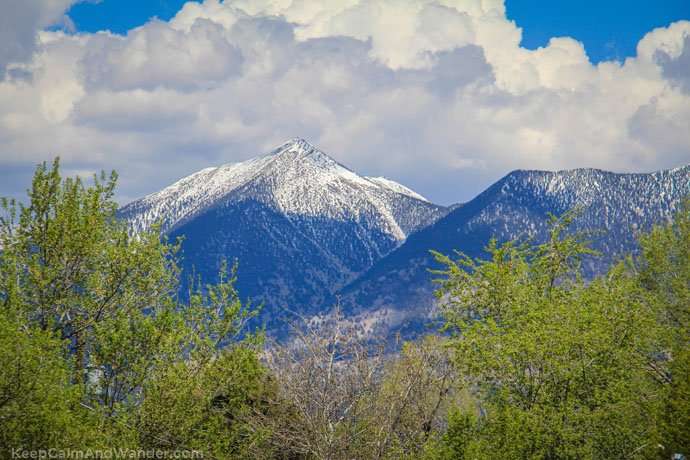 The San Francisco Peaks in Flagstaff, Arizona / From Phoenix to Grand Canyon: Tips for Backpackers.

They’re both ok. There’s not much difference between them. They’re even just few steps to each other and to Amtrak station where the Arizona Shuttle drops off and picks up passengers. They’re close to restaurants, cafes, bars, Route 66 and the old town. It’s a mile and half to the Greyhound Bus Station. And oh, both don’t have lockers in the room.

Things to do in Flagstaff:
The only thing I did here was hiked the hill where Lowell Observatory is located. It’s known for its discovery of Pluto.

I also went inside the Northern Arizona University because I wanted Starbucks. 🙂

Go hiking. They have hiking trails here,too. The city is literally surrounded by three National Parks. The towering San Francisco Peaks is overlooking the city.

I stayed here for three nights after camping at the Grand Canyon because I joined day tours to the Antelope Canyon and Monument Valley.

Public transport in Flagstaff:
There is a bus service but it only arrives in specific time and goes by selected streets/routes. But it’s better than none, like Sedona.

From Flagstaff to the South Rim of the Grand Canyon, take the Arizona Shuttle

There is no such thing as cheap accommodation or hostel at the Grand Canyon. There are hotels which backpackers, like me, can’t afford. 🙂 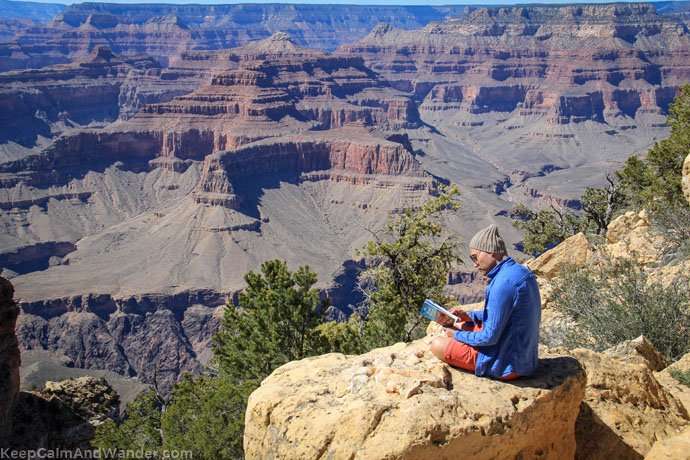 From Phoenix to Grand Canyon: Tips for Backpackers.

Where to stay at the Grand Canyon
Go camping at Mather Campground. You’ll save a lot, for sure. The campground is near the General Store and the bus stop. There’s a shower and laundry machines, too.

The General Store
Rent your camping equipment here if you don’t have one. The store has a cafe, grocery, souvenir shops, beer / wine aisle, etc.

Don’t worry about the price. It’s the same as the one in Flagstaff or outside the village.

What to do at the Grand Canyon
At the gate, when you enter via Arizona Shuttle, you’ll be given a guide to plan and enjoy your stay. Read it because it will really save you time. Plan your day, especially if you’re there for a night or two only.

The Blue Line goes around inside the village. Take this bus if you go to your hotel, lodge, Mather Campground and General Store.

The Red line goes to the western part. Take this bus if you want to see the stunning Grand Canyon sunset.

The Orange line goes to the eastern part. Take this bus if you want to witness the Grand Canyon sunrise.

When you’ve conquered the Grand Canyon already, celebrate the feat and treat yourself however you want it. Or if you’re still on a tight budget, just give yourself a shoulder tap. It won’t cost you, for sure.

Getting out from the Grand Canyon

To get out of the Grand Canyon, you can take the Arizona Shuttle again back to Flagstaff where the Greyhound bus has services to Phoenix, Las Vegas and some cities in California.

You can also take the Grand Canyon train to Williams. Beware: it’s not cheap.

If you decide to see more sightseeing, go back to Flagstaff and take tours to: 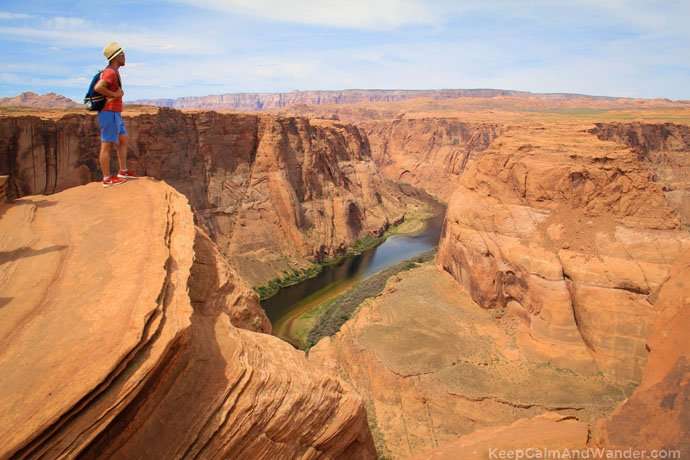 Horseshoe Bend in Arizona / From Phoenix to Grand Canyon: Tips for Backpackers.. 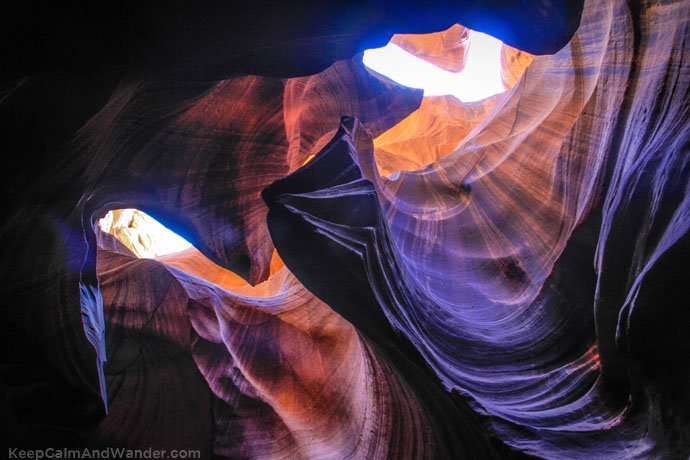 The Antelope Canyon / From Phoenix to Grand Canyon: Tips for Backpackers.

And the Monument Valley. 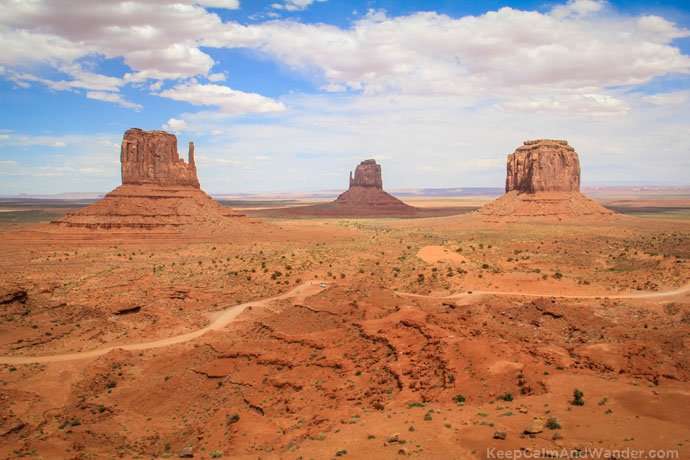 The Monument valley in Arizona / From Phoenix to Grand Canyon: Tips for Backpackers.

Take note that these places are really far and it’s a long drive from Flagstaff. It’s a scenic drive and as far as I know, there’s no public transport that goes to these places.

Note:
The Antelope Canyon and the Horseshoe Bend can be reached / taken with the same tour.

BLOGGER’S NOTE:
This is my first post of my 12-day backpacking trip in Arizona. Come back for more travel tips and photos. I promise, it’s going to be worth it. 😉 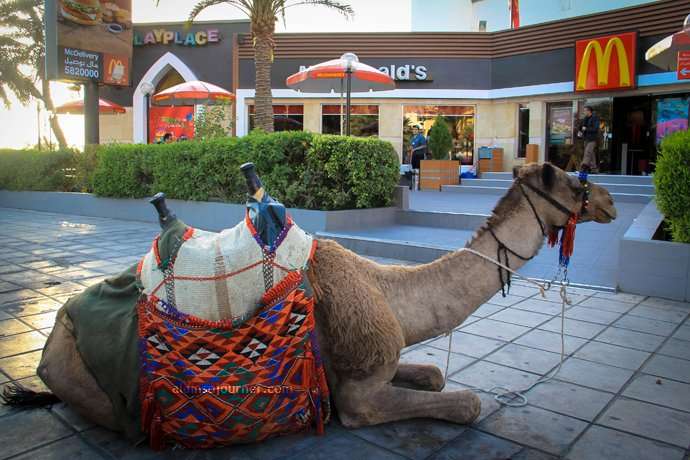 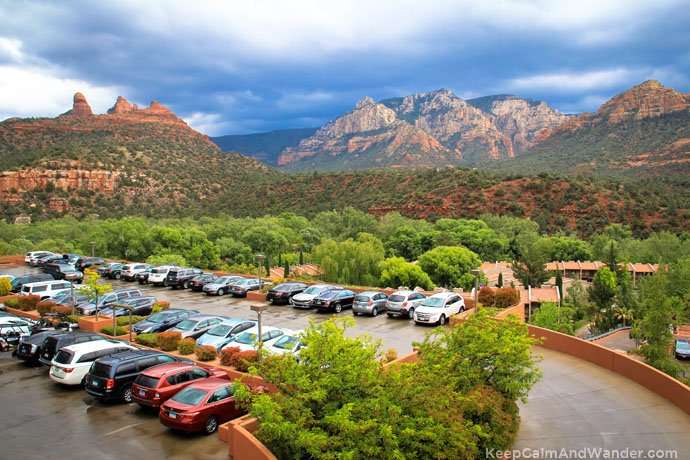 Is Sedona the Most Beautiful City in America?