If You Can Find the Frog on the Skull in Salamanca, You Will be Rewarded

If you can find the frog on the skull In Salamanca, you will be rewarded. No, not with money or a Prince Charming you’ve been praying for. Definitely, not a brand new car or that trip to Antarctica you’ve been wanting to check off your bucket list. Haha! No, not even meeting the hot and talented Nyle Di Marco! Not even close to that! 😀

Stop scrolling down now if you don’t wish to know where the frog on the skull is! The reward will only be given to those who look for it without knowing any clue. Finding it yourself sans clue is a real challenge but you feel good when you spot it! I found it after 8 minutes of careful inspection. My neck hurt from looking up. Yes, indeed, it was a real pain in the neck! 😀

Instead of telling you its location right away, let me give you bits of information first.

This is the front door of the University of Salamanca which was built in the 16th century.

The University of Salamanca is Spain’s oldest and the 4th in the world that still continues to operate until today. It was founded in the Middle Ages (1218).

Above the door are sandstone carvings that are so tiny but perfectly polished. 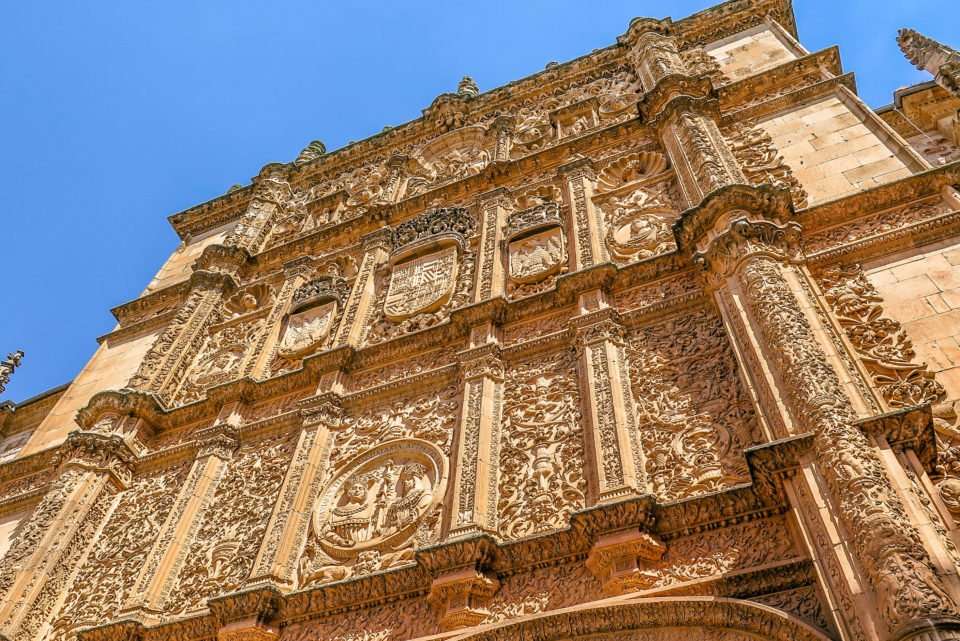 Find the Frog on the Skull in Salamanca (University of Salamanca, Spain)

It shows signs and symbols of Spain and the Royal Family.

There are three interpretations or stories about the tiny frog on the skull.

Let’s start with the more historical and perhaps, more believable version. The skull represents Prince Juan who died of illness before reaching 20. The frog embodies Dr. Parra who looked after and tried so hard to save the Prince.

The second story sounds like a legend. The frog stands for sexual desire and the skull stands for death or failure. The carvings of the frog on a skull is there to warn students of their failure if they heed to their sexual urges. It’s been said that the university had a lot of prostitutes to lure and distract students from their studies, causing them to fail. And worst, these sexually-active women carried diseases that might lead them six feet below the ground.

The most famous version of the story which many students believe (or are fascinated by it) is that if you spot the frog on the skull without help, you will certainly pass all your exams. But, for the visitors in the city, if you can find it, you will be rewarded with good luck in your future. 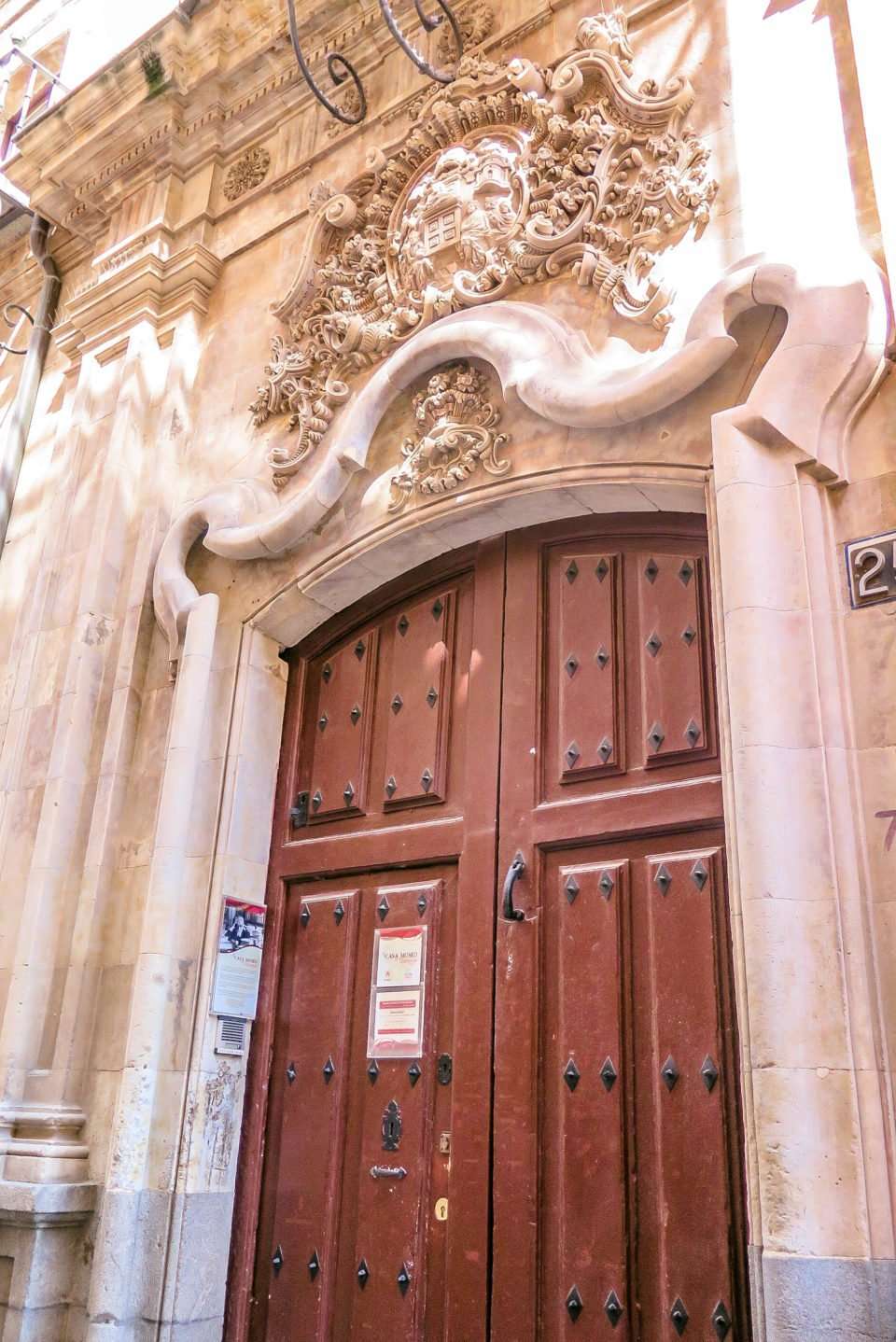 Now, do you still want to know where the frog is? If not, you should stop now so you can still claim that good luck in your studies or life.

Look at the picture below and see if you can spot the famous frog. 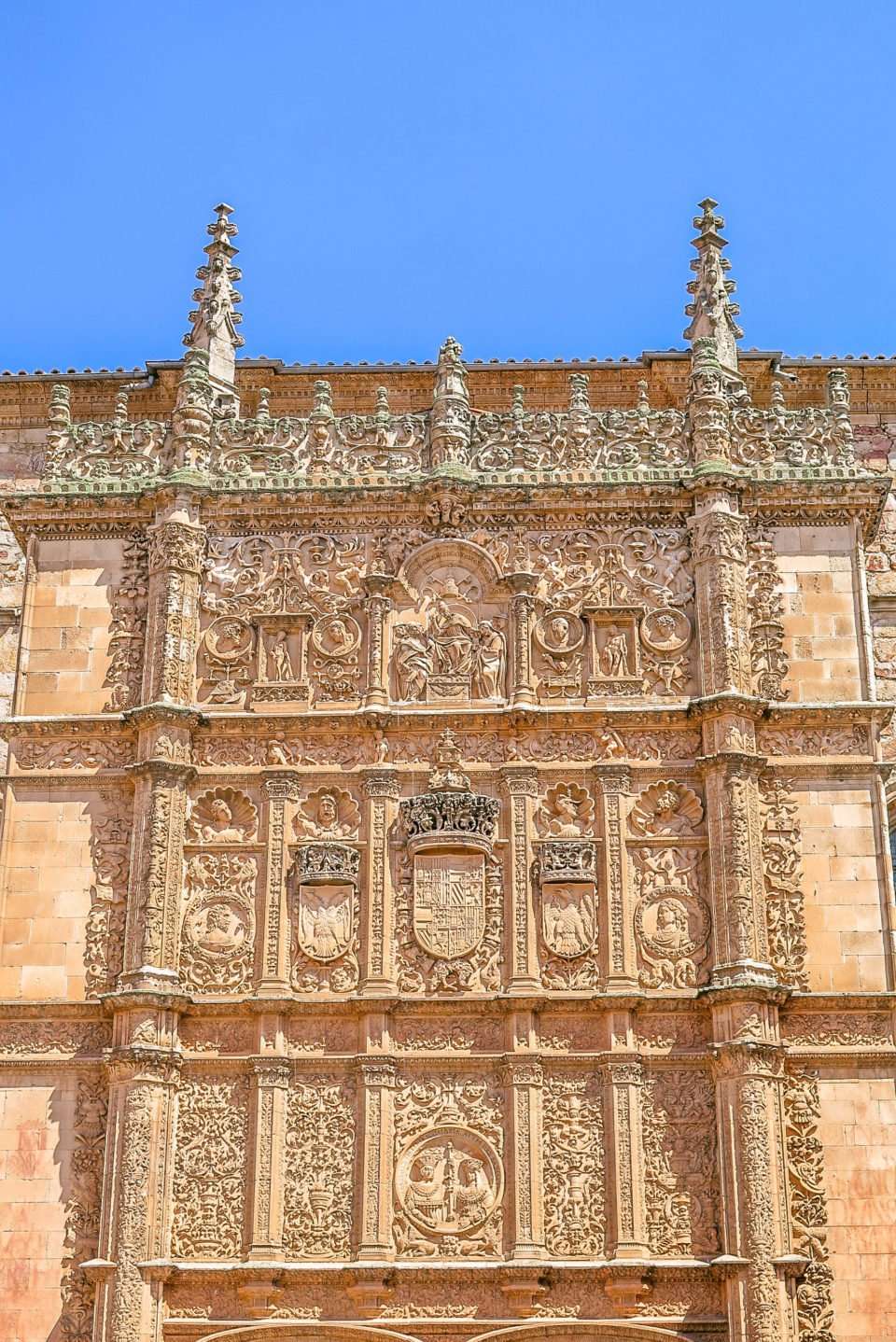 Find the Frog on the Skull in Salamanca (University of Salamanca, Spain)

Alright, I’m not really going to tell you exactly where it is but I’m going to give you a clue: concentrate on finding it on the right column. Start from the top and down to the bottom. 😉

Whatever story you believe in, we can agree that this ornate door, a UNESCO World Heritage Site, is one piece of art!

From Madrid to Salamanca

You can take a train from Madrid to Salamanca in the morning (8:55) and be back at 6:20 in the evening. Round trip would cost you around 30 euros. You can buy your train ticket here.

Related: Things do and see in Spain