Cruising the Mekong River in Vietnam

Cruising the Mekong River in Vietnam gave me view of what life looked like to people living on boats and on stilt houses. There’s so much activities there and people didn’t seem to mind the deep and strong current of the yellow river that passes through six countries: China, Laos, Burma, Thailand, Cambodia and Vietnam.

Ours was not a luxury cruise. Sixteen of us, foreign tourists, seated on a rattan chair on both sides of the motorized. The cruise lasted 5 hours, stopping along river banks where waiting vendors peddled their products to excited tourists. And because the tour included some walks under the blistering sun, the cone-shaped hats, which Vietnam is famed for, were the most bought item of the day.

Let me start relieving the cruise experience by Mekong River in Vietnam.

This is our boat.

Some of these boats are for cruising and some are used for trading.

Before we left, some farm produce were loaded into the back of our transport.

When we started sailing, a looming rain was threatening us from a distance.

Then suddenly, the dark clouds were gone, leaving us a blue sky.

We overtook some boats that are as old as the ancient temples in Asia. Many are in bad condition, such as this one.

Farm produce like vegetables and fruits are transported via boats because they’re faster and cheaper.

Sometimes, trading and buying happens in the middle of Mekong River.

Most families living on the river banks have their own banca (small boat).

When their children are at school, many women operate a boat like this for extra income. They’re usually transporting passengers in short distances, from one river bank to another.

These houses on stilts are in dangers. Most of them don’t have a toilet, so they just squat somewhere and let the river take in their shit.

The scenes are sometimes breathtaking.

School girls we saw wear a uniform like this. They are covered from head to toe.

Even the oldies. Why? Simply because they’re afraid to be dark-skinned!

The tour brought us to a ginseng factory where the men in our group drank it with much gusto while their wives were grossed out. Me? Nope. I didn’t try it. I did it before but argh, it’s disgusting I almost puked! They also brought us to a handicraft factory where women carved out monkey busts out of coconut husks.We were also led into a little forest where diverse flora and fauna were well taken cared off, like it’s a botanical garden sans high fences and rooftops that are typical in cities’ arboretums.

Travel Guide for VIETNAM
Traveling Solo to VIETNAM?
G Adventures Brings You to VIETNAM for an adventure!
Search for hotels, tours, restaurants, vacation rentals and reviews via TripAdvisor!
Hostels in VIETNAM
Flights to VIETNAM 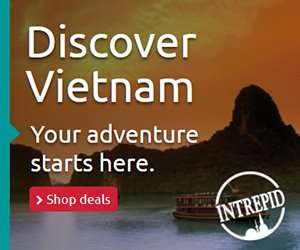