Checkpoint Charlie in Berlin – Symbol of the Cold War 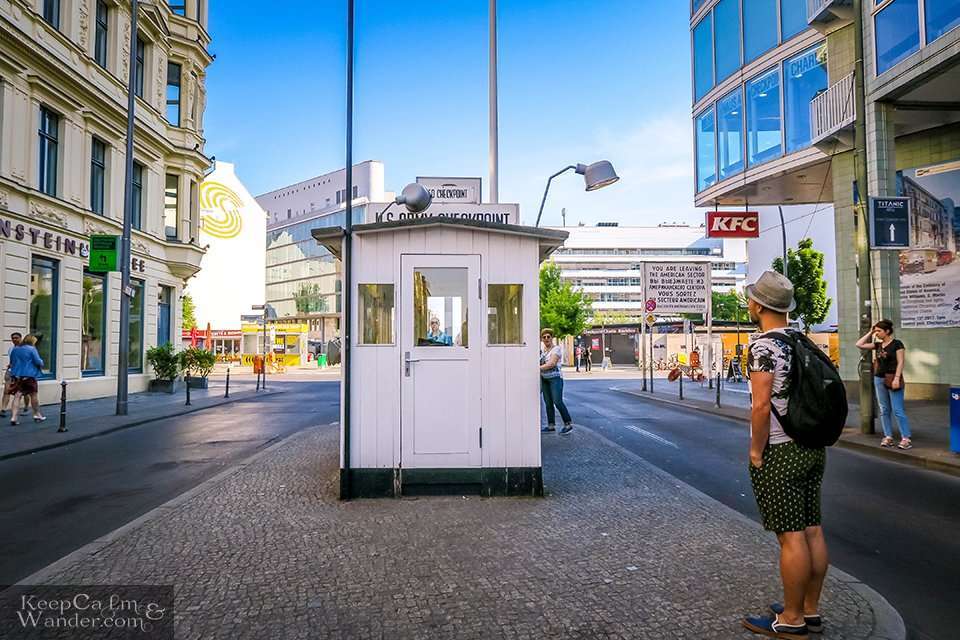 The Checkpoint Charlie in Berlin is a symbol of the Cold War that is still standing until today. Though it is more of a tourist attraction nowadays, the checkpoint still looks true to what it used to be. If you want to see the original guardhouse, it is now at the city’s Allied Museum.

What’s in a name?

If you are like me, you must be wondering who Charlie is and why the checkpoint was named after him. It turned out that there’s no guy named Charlie. It’s taken from the NATO alphabet – Alpha, Bravo, Charlie, etc. This guardhouse is the third, thus, the name, Charlie. Obviously, the Americans managed this historic checkpoint.

Why is this Guardhouse famous?

Well, of the three entry gates to East Berlin, Checkpoint Charlie is the only one that only allows non-Germans, diplomatic personnel, and American soldiers to pass into the Eastern side of the divided Berlin.

In 1961, the Berlin Wall was constructed. It all started with barbed wires to restrict the East Berliners to move to the West. Later, the barbed wires became a long, concrete wall. The division of the East and West Berlin lasted until 1989. More than 1,300 people from the East died trying to escape to the West.

Daring Escapes from the East

Checkpoint Charlie was a witness to the daring escapes of East Berliners. The escape of Peter Fechter was the most famous of all. As he was trying to escape, the East border guards shot him. His body was stranded on the barb-wired fence and was left to die there, blood dripping from his body. The American soldiers couldn’t do anything as Peter was still on the East Berlin side. On the other hand, the East guards were scared to provoke the West guards if they were to approach him. More than an hour later, Peter’s body was removed by the East soldiers. The catastrophic event led to a wide, angry protest from the West side.

A Tense Standoff Between the USA and the Soviet Military Forces

On both sides of the checkpoint, American and Soviet tanks were positioned, waiting for war. It all started when an East border guard demanded to an American diplomat, Allan Lightner, from the West to hand in his document/passport. He was going to the East to watch an opera. However, he insisted that border guards have no right to demand his passport, but only East German officials.

The standoff lasted for 16 hours – when Pres. Kennedy called and convinced the Soviet leader to withdraw their tanks.

You can’t miss the pole with huge, back-to-back portraits of two soldiers. These are real soldiers. The American soldier, facing East, is still very much alive, but have already retired. The soldier’s name is Jeff Harper.

Facing West is the portrait of an unknown Soviet soldier. No one knows of his whereabouts nowadays. Let alone if he knew that his portrait is up there at Checkpoint Charlie.

This is an open-air exhibition a few steps from the guardhouse. Here, you will find the stories and photos of those East Berliners who fled successfully – and those who failed. While a few of the exhibitions are free, some are not.

Piece of the Berlin Wall

You will find it outside the Cold War Exhibition Black Box. Since it is outdoor, no need to pay to see it up close.

You can’t miss it. If you are facing the portrait of the Soviet soldier, the museum is on your right.

Presence of the Americans

Funny thing – the presence of the Americans are still here up to this day. They haven’t left even if Berlin won’t need them anymore. KFC and McDonald’s – two of America’s great imports are heavily felt here. 😀

Checkpoint Charlie was featured in Roger Moore’s “James Bond 007” film (Octopussy). In the 1983 film, viewers will see Mr. Bond passing through from the West to the East.

Also in the 1965 film, “The Spy Who Came from the Cold,” run a still of this place on its opening scenes.

Where is the Checkpoint Charlie?
It’s right at corner Zimmerstraße and Friedrichstraße Streets.

I stayed at Hostel a&o Berlin Hauptbahnhof, which is around 7 minutes walk to Berlin Train Terminal Station. You can book it via Booking, Expedia, HostelWorld, and TripAdvisor. The hostel was a convenient choice for me as I had an early train trip to Prague on my last day. The hostel is clean, and the rooms are quite spacious, too. They have a pool table, bicycle rental, luggage storage, a spacious lobby, a bar, and a souvenir shop. They’ve got a nice laundry room, too. If you’re a traveler who likes to walk, the Bundestag, Brandenburg Tor Gate, and Reichstag are 30 minutes walk from the hostel. It’s a good value for money.