Cenotes are unique to Mexico, especially in the Yucatan State. They are wells surrounded by rocks and most often they serve as the mouth of an underground river or a cave. They’re also good for snorkeling and diving. The freshwater is crystal clean that you can see the bottom / well bed even if it’s too deep. 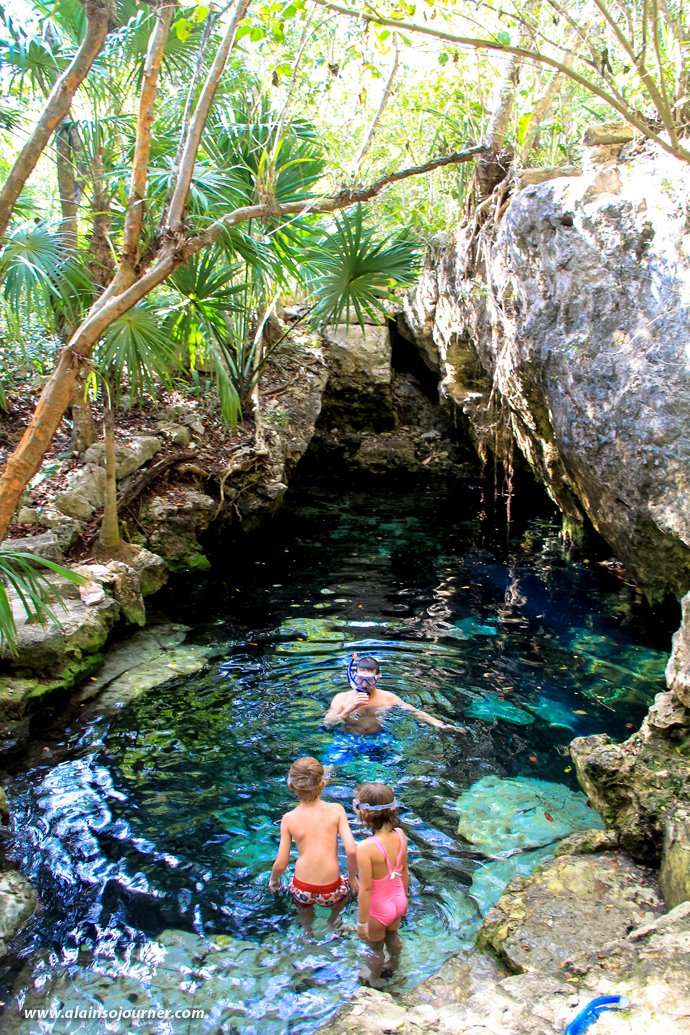 In some cenotes, like in a form of a cave, you can see stunning stalagmites and stalactites. Local governments develop them by putting up some stairs for easy access. They also put up some strobe lights to add drama to its beauty. 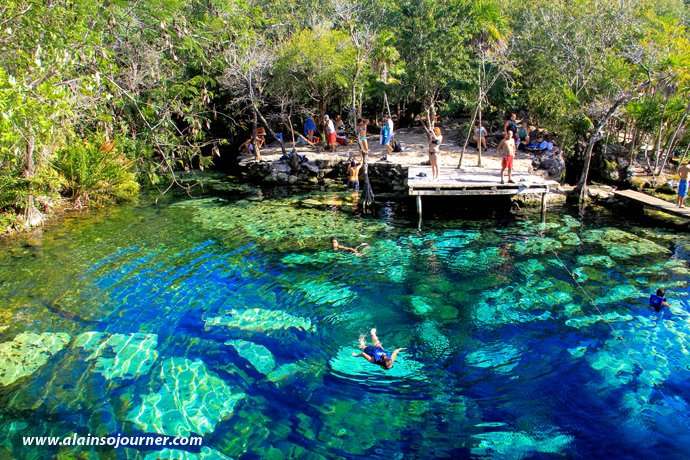 In our second day here in Mexico, we were supposed to see the most-raved after cenote, the Sagrado Cenote Azul, close to Chichen Itza. But because we spent so much time there, we decided to skip it. Everyone was hungry for lunch and it was already 3 pm. After our late lunch of deer meat, our driver brought us to another cenote but we were told that  they won’t accept visitors after 5pm. 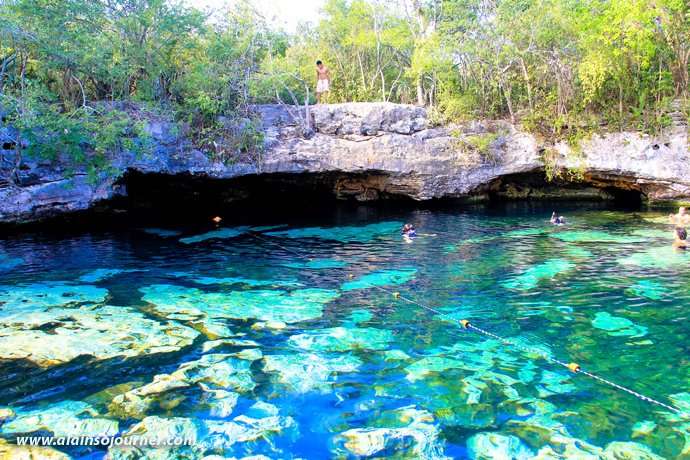 Because I was determined to see one, I found out that there are two cenotes  few minutes ride from Riviera Maya Grand Serines Beach Resort: the Cenote Azul (Blue Cenote)  and Cenote Cristalino.

After lunch, I grabbed a towel in the pool and headed out of the hotel to get a collectivo (a van that picks up passengers along the Cancun-Tulum highway). In less than ten minutes, the driver dropped me off across the gateless entrance of the Cenote Azul. 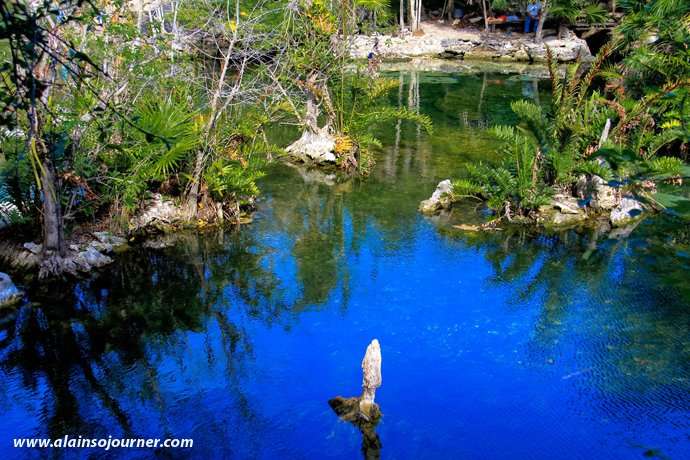 When you enter, there were two small cenotes or wells. I passed by a group of people having a fashion photo shoot. A skinny model in her undies was half-submerged in one of the cenotes.

On I went to find what’s in store for me. I followed a jungle-like path that leads to a bigger cenote. As expected, tourists were already diving, swimming, snorkeling, posing and sunbathing on the platform when I found it. Good thing was—it was not crowded. The water was sparkling cool and clear. The children were so amused by the fish who gathered around them everytime they threw a morsel of food. One child can’t really stop laughing at herself that I realized I was laughing, too. 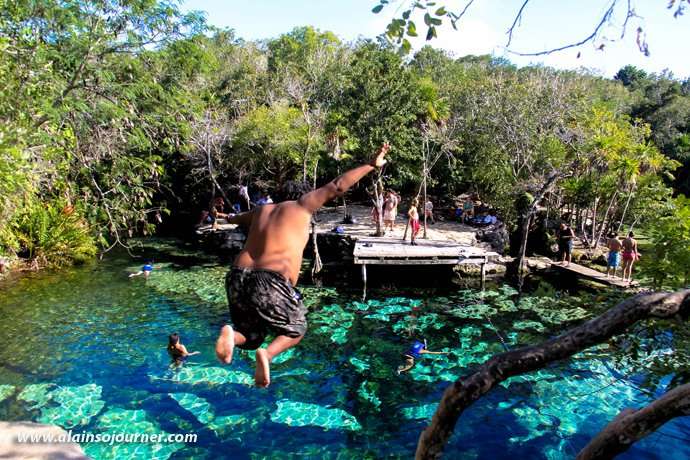 I walked on to the elevated stone bridge that cuts through the middle of the wide pool of freshwater to explore the area further. Stone edges were sharp so walking like a beauty queen isn’t an option. LOL…

I climbed the hill and there—I had a better view of the whole well. Boy, it was a really amazing view of nature.  The sun’s reflection pierced through the water surface and it brought an array of dancing diamond-like sparkles. I sat down on a rock and watched the spectacle for 20 minutes. 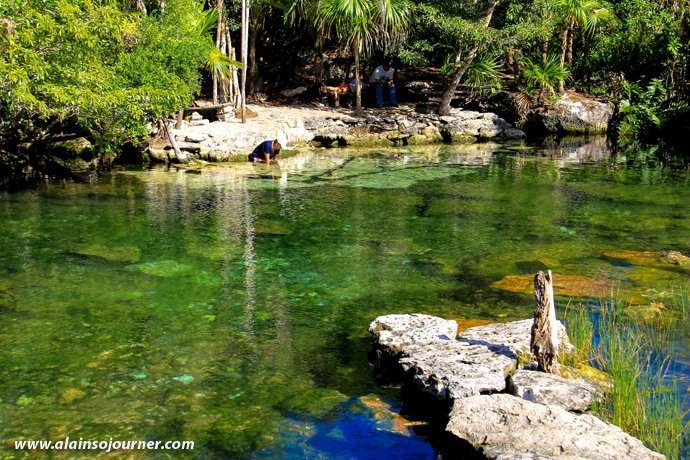 When I was done exploring (there’s really not much to explore), I decided to go for a swim. And as soon as I dipped into the freshwater, a school of tiny fish came around my feet and began pricking them! I had my first fish spa! Yay! It was kind of ticklish at first but I easily got used to it. Judging from their population, they like my left foot better. I guess that tastes better, too.

This cenote has a natural platform of elevated rock for diving—but I didn’t do it. Hello, I don’t even trust my swimming skills so diving would just scare the shit out of me. LOL…

Swimming in cenote’s freshwater is actually much better than dipping into a salty sea. I find it more relaxing, fresher and more exotic without the struggle of crashing against the waves.

Travel Guide for MEXICO
Traveling Solo to MEXICO?
Hostels in Mexico
Going to MEXICO? Save at Expedia’s Great Deals and Packages!
Flights to Mexico 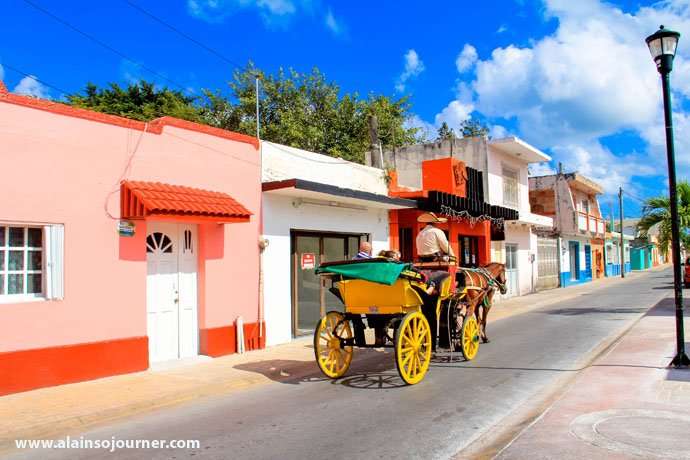 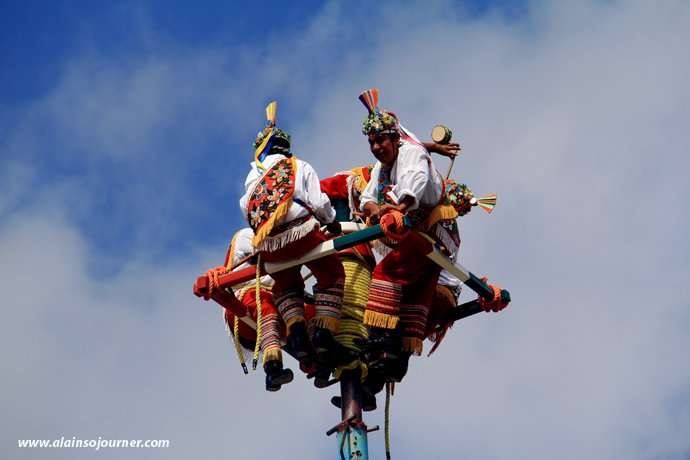