Casa Loma is a castle that sits dignified on a hill overlooking the city of Toronto. This statueque beauty is a combination of neo-classical and gothic architecture which shows the former owners penchant for European castles.

Sir Henry Mill Pellatt built this castle at the height of his business success. He was an ambitious financier who made bold investments in electricity, real estate and mining. There was a time when he contributed 1/3 of Canadas economy. Due to his contribution to the country, he was was confered to knighthood in 1905.

After 10 wonderful years of living in Casa Loma, Sir Pellatt and his businesses went bankcrupt and was forced to leave the castle and lived in a small house in a farm. His is a story from riches to rags—and the “house on the hill” is an evidence of his vast wealth and influence to the City of Toronto and in Canada.

Casa Loma is one of the Top 5 Destinations in Toronto. Click for a cheaper ticket HERE.

When I arrived there in the afternoon (today), I thought its gonna rain due to heavy clouds. The setting sun was struggling to peek behind the clouds in the West and the castle looked so bright when I took this photo under the trees shadows. 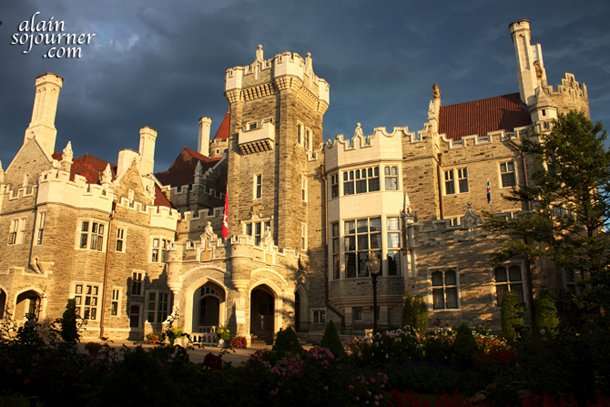 The clouds were getting darker and the setting sun shone its golden rays to call it day when the castle itself turned golden and amazingly beautiful.

The contrast of the dark blue sky and the golden facade of Casa Loma was so breathtaking.

The West side of the castle.

I didnt stop taking pictures thinking that when the sun finally sets, this golden beauty would vanish in a wink of an eye.