Burj Al Arab Dubai is not a certified seven-star hotel in the world. You read the title right.

No one ever rated it as such. In fact, its website doesn’t boast itself as “the only seven-star hotel in the world.” No, they don’t use that, too, in their advertising anywhere. Also, the hotel doesn’t rate itself as a five-star hotel but a luxury hotel. Period.

And oh, if you’re really curious how much will it cost you for a night, check here.

The truth is: a British journalist dubbed it as the “world’s only seven-star hotel” during its press briefing. She was so impressed that she rated it herself—and the world believed her. So, now, no one can ever stop the gossip she spearheaded. 😀

I must admit that I believed the gossip, too. 😀 However, I came across an online article that “the only certified seven-star hotel in the world” is in Milan, Italy. Go and click that link and judge it yourself!

Burj Al-Arab or Tower of the Arabs is built on a man-made island.

It is the world’s 3rd tallest hotel.

It’s is shaped as a dhow, a traditional Arabian sea vessel.

It has 56 floors—three of which are below ground (or under the sea?)

Surrounding the hotel is a public beach with bikini-clad people and a lot of tourists.

And they have a free wifi station, too.

They also have a beach boardwalk —in case if you’re walking in heels. 😀

At night, the sail-like building shows its true colours.

Travel Tip: Have dinner al-fresco at a Turkish Restaurant just right off the corner on a street that leads to its entrance.

You can see Burj Al Arab anywhere. Here’s a view from Souk Madinat.

Travel Tip: Have your lunch at Souk Madinat and drink in this view.

And of course, it is clearly stunning from the Top of Burj Khalifa, the world’s tallest building.

But, I think it’s more stunning if I photobomb its architectural beauty with my rainbow wig! 😉

You see, without me in this photo, Burj Al-Arab’s architecture is plain bland on a beautiful day. LOL… 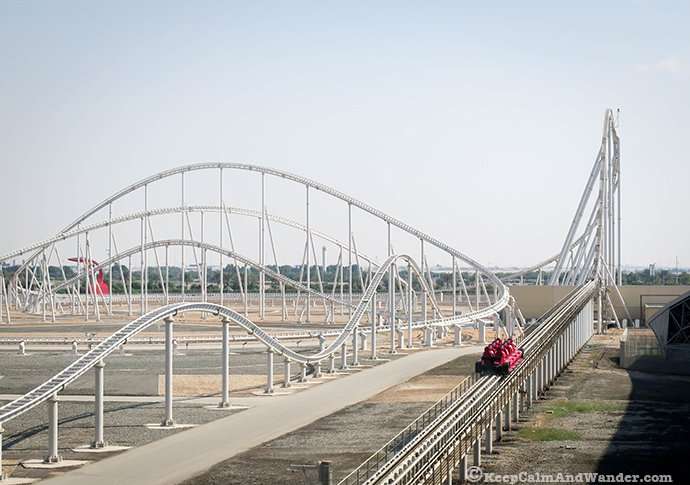 Things to do at Ferrari World in Abu Dhabi