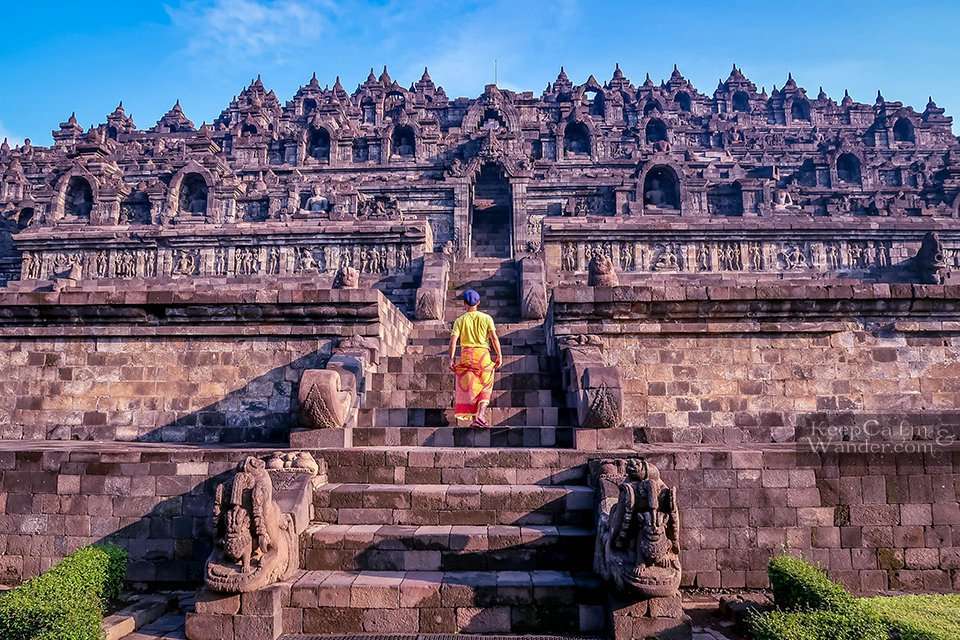 How to get to Borobudur

Take a tour – that’s what I did. The van driver picked me up at 4:00 in the morning and we picked up four more passengers. It was an 11-seater van so it was not crowded at all. We slept all throughout an hour journey. By the time we arrived, some tourists were already ahead of us – in a busload!

Another way to go there is by getting a private car/driver. You can always flag down a taxi and negotiate with them. My hostel told me that IDR500,000 ($37) is a fair price. Take this option if there are 3 or 4 of you in a car.

Related Post:
Dambulla Cave in Sri Lanka is the Sistine Chapel of the Buddhism World

Should I bring a sarong or not?

This is a question I asked my Indonesian friend – and he said yes. And so I did. However, when we arrived at almost around half past 5 AM, no one was really checking if we were dressed appropriately. On the other hand, I still used my colorful sarong for pictorials. 😀 And I think you should, too! 😀 When I exited from the temple, I saw a table with 3 employees collecting sarongs that were borrowed. Therefore, if you go there for the sunrise, no one will check the dress code. If you go later, after sunrise, you will be given a sarong if you are dressed indecently.

Indonesia is the world’s most populous Muslim country, so it was kind of a surprise to me to see the influence of Buddhism here which was brought from India.

Borobudur Temple covers an area of 2,520 m2 and it is circular in form.

It sits atop a hill so it overlooks the lush greenery, distant mountains, plains, and fields.

As you go up, you will pass through platforms and stairs until you reach the top.

However, you won’t notice and appreciate them as it will still be dark when you arrive there. Your driver will give you a small flashlight to use and don’t lose it or else you’re going to pay for it.

Explore and go around the ten round terraces.

Take a closer look at the carved stone statues, big and small.

There are 504 Buddha statues here.

Seventy-two of these Buddha statues surround the dome at the centre of the temple. Each of them is seated inside a stupa.

The stupas looked like a set of lego formed on top of each other.

And guess what? These stone blocks are held together without any cement or epoxy! Impressive, eh?!

When you are done going around the temple, you will really feel that this is one of Indonesia’s most incredible historical find!

I stayed at One Baek Hostel where it is surrounded by bars, restaurants, and convenience stores. The room was clean, and they will allow you to check-in as long as the beds/rooms are ready. The staff members are nice and they’re willing to help out on where to go and what to do in the city. They also offer tours to Borobudur and Prambanan. Ask for their tour list and decide which tour you’d take. You can also book this hostel through TripAdvisor, Expedia, and HostelWorld.