View from the Top: Bologna is a City That Still Looks Medieval 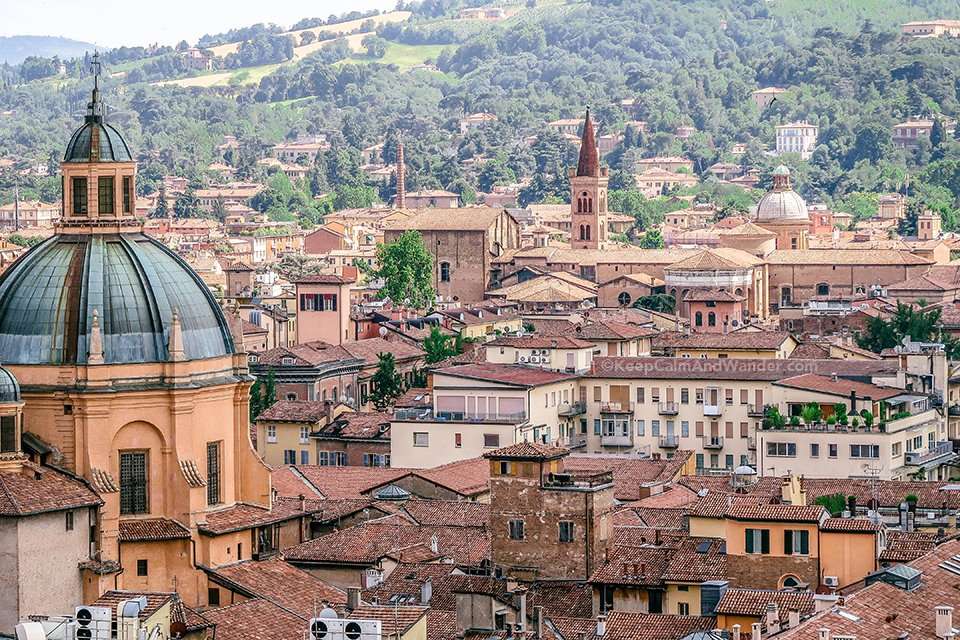 View from the top of San Pietro Tower in Bologna (Italy).

Bologna is a city that still looks medieval from the streets to the rooftops. And thank goodness, it’s one of the off-beaten paths that tourists skip when visiting Italy. I’m glad I did stop here for two nights without expecting much on what to do and see. After two weeks of backpacking in Italy, I decided to slow down in Bologna. The city is pretty relaxed and there weren’t many tourists when I was there. The main square was a bit crowded but few steps from it, you’ll find a nice place to sit on for a drink or two.

Bologna is the capital city of Emilia-Romagna region in northern Italy. I didn’t know much about Bologna until I came here. In fact, the only clear knowledge I had for the city is its pasta bolognese – which I was pretty sure originated from here. 😀 And, of course, I gobbled down on it with much gusto. It tasted good with any kind of wine. Yes, I had three different wines before, during and after the meal. 😀

Bologna is a city of Bell Towers. The best place to view the city’s skyline is on the top of San Pietro Tower. From here, you’ll have no doubt that Bologna is a city of bell towers. In the 12th century, there were around 200 bell towers. Some of them were destroyed by fire and natural disasters which brings down to around 20 towers nowadays. No one knows why the city had a lot of them but some suggest that rich families used them as a defence. Or, I suspect, to show off their wealth: the higher the tower was, the richer they were.

Related: The Leaning Tower of Pisa

Bologna is a City That Still Looks Medieval

This time, I stayed away from hostels. After travelling for sometime, all I needed was a ME-time. So, I stayed at a BnB type room. I booked myself at Stazione Centrale, which is 20 meters away from the back entrance of Bologna Central Station. Though bathroom was shared, I had my own room with a tiny refrigerator and a small sink. Internet connection was good and cleanliness was ok. From here, you can walk to Plaza Maggiore for 20-30 minutes. There are restaurants and fast-food chains in front of the train station. You can book it via Booking.com.

Going to Rome and the Vatican?

Here’s a tip to save money:

Rome and the Vatican are packed with places to see and history to marvel at. If you’re going to stay there for a few days only, it’s very impossible to squeeze and see everything you want to see. This Rome & Vatican Pass will let you see the places you’ve been dying to visit and know of from the pages of history books.