I’d be honest. I didn’t know that prolific American writer, Ernest Hemingway was born in Chicago—not until I accidentally scanned the last pages of my [easyazon_link asin=”1742200613″ locale=”US” new_window=”yes” nofollow=”default” tag=”pridecostume-20″ add_to_cart=”default” cloaking=”default” localization=”yes” popups=”yes”]Lonely Planet Chicago Guidebook[/easyazon_link] when my eyes caught the words in bold letters, Oak Park & Around. Right below those words are the names Ernest Hemingway and Frank Lloyd Wright, America’s most famous architect. I read on and I had an epiphany—that he’s really born here in Chicago, although it’s a little bit West of the city and it’s a long train ride at the end of the Green Line. But, wait, how many people know that Ernest Hemingway was born in Chicago? Ok, it’s not really in Chicago but it’s worth a day or half-day trip though. 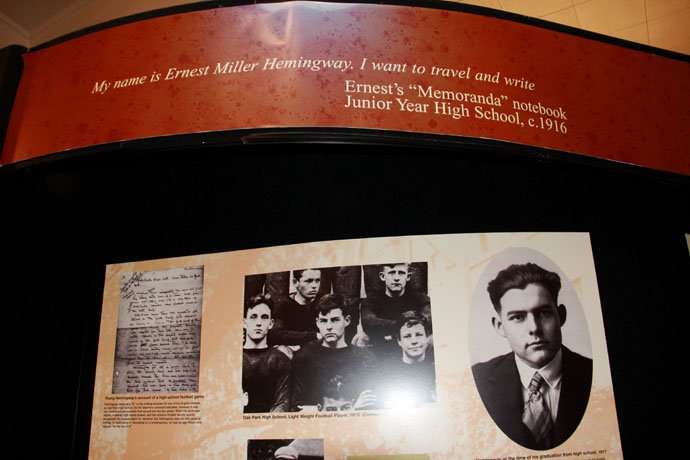 On my last day in Chicago, I decided to pay tribute to the master writer of understated style. I was thrilled, really. If there’s one writer I’d really like to emulate, it would be him. His narratives are written in vivid clarity (is that redundant?), simplicity yet impeccably true! He doesn’t mince words. He wrote and described things so moving and universal. He’s the lord of using past verbs, narratives and descriptions! LOL… 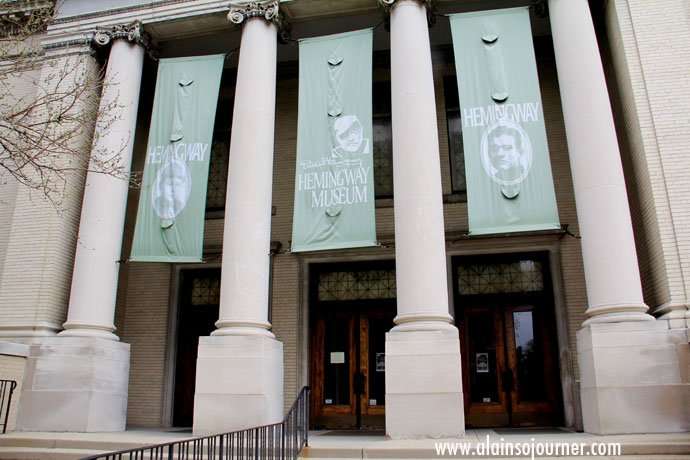 How to get there:  Take the Green Line subway and get off at Oak Park (one stop before last). Walk north on Oak Park Avenue until you reach building number 200, the Hemingway Museum. Despite the fact that Hemingway describes this neighborhood as “village of wide lawns and narrow minds”, the residents erected a museum in his honor! He is the prodigal son who is well-loved in this area. 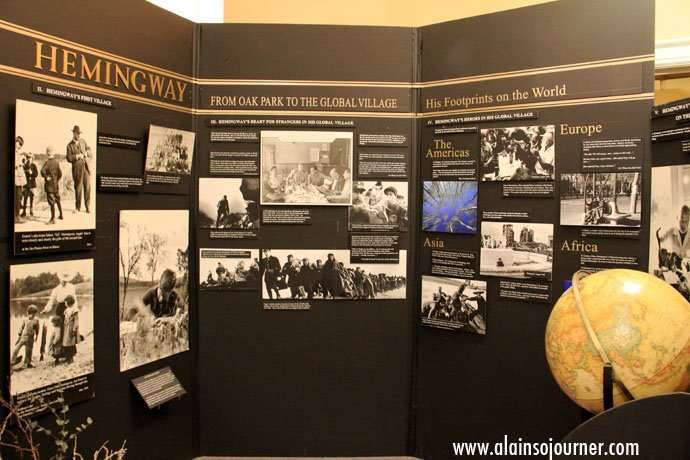 [easyazon_link asin=”0684801469″ locale=”US” new_window=”yes” nofollow=”default” tag=”pridecostume-20″ add_to_cart=”default” cloaking=”default” localization=”yes” popups=”yes”]Ernest Hemingway Museum.[/easyazon_link] Pay up $10 for the entrance fee which can be used twice. The ticket includes entry to his house one block away from the museum. The museum has comprehensive details about Ernest’s family to his early years in Oak Park to his time he served in World War I, his travels and adventures and life after that. They even have a mini replica of the writer’s grade school classroom and a boat he used when fishing in Lake Michigan in his teenage summer years. Old photographs are hanging everywhere and his words are plastered everywhere, too. They have a space where posters of Hollywood movies based on his life and stories cover the wall. Old stuff here and there are displayed like living witnesses of his life. 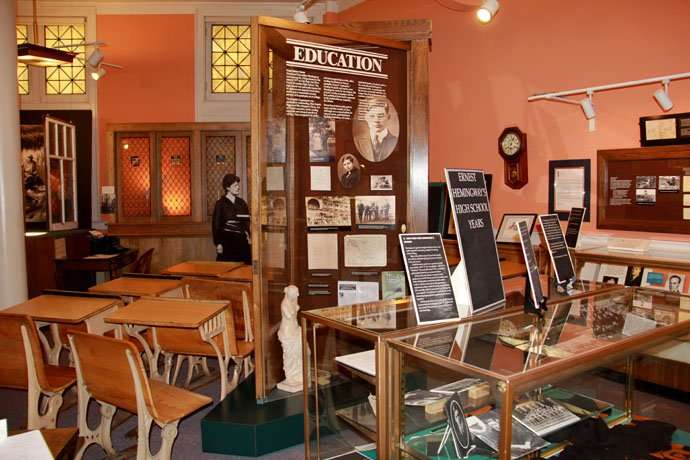 Hemingway’s education in Oak Park was his only formal training in school before he left to become a volunteer and later a war correspondent. His educated parents thought that his writings were “filth”. 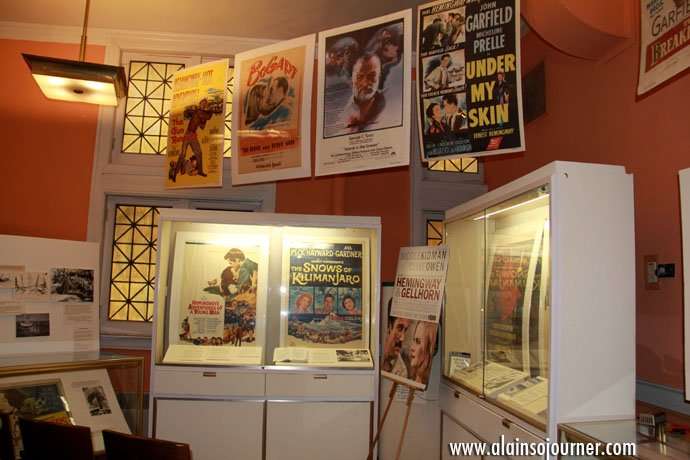 Hemingway’s Birthplace He was born in 339 North Oak Park Avenue. If you exit from the museum, continue walking on your right. The nice Victorian house is on your left. Use the same ticket you bought / paid from the Museum. 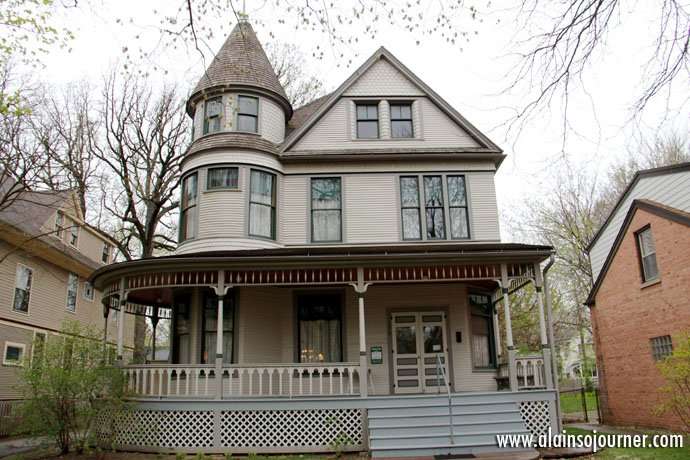 A nice Victorian house where Ernest Hemingway was born.

The moment I entered the house, an old man asked me where I was from. His face lit up and told me with excitement, “Oh, do you know that Ernest Hemingway was a correspondent for Toronto Star long time ago? He wrote for your newspaper reporting about the war.” I was like, “Hmmmm… I don’t know but, really?” LOL… 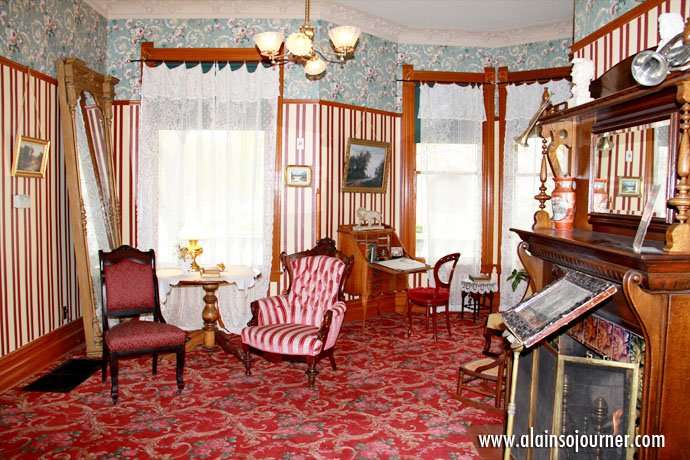 There’s a house tour that starts every hour. It takes 45 minutes or so. If you’re in a hurry, or if you arrived at 1:30 pm and you don’t want to wait for another 30 minutes–until 2, you can tell the docent that you can manage to go yourself. It’s not a big house anyway, but you’ll miss interesting info about the writer’s young life. 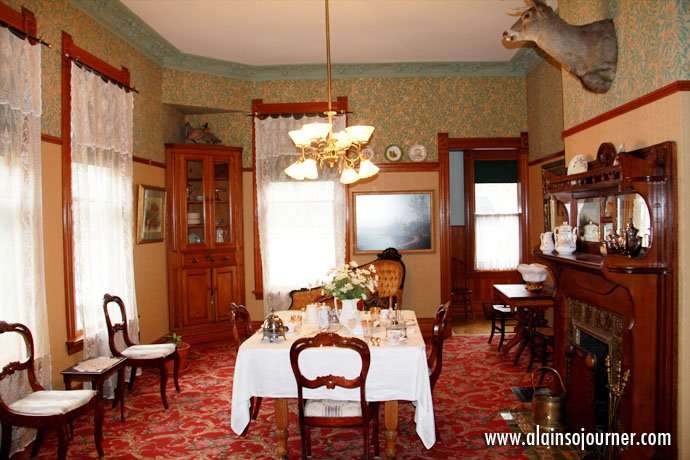 The dining room of the house where Ernest Hemingway was born. 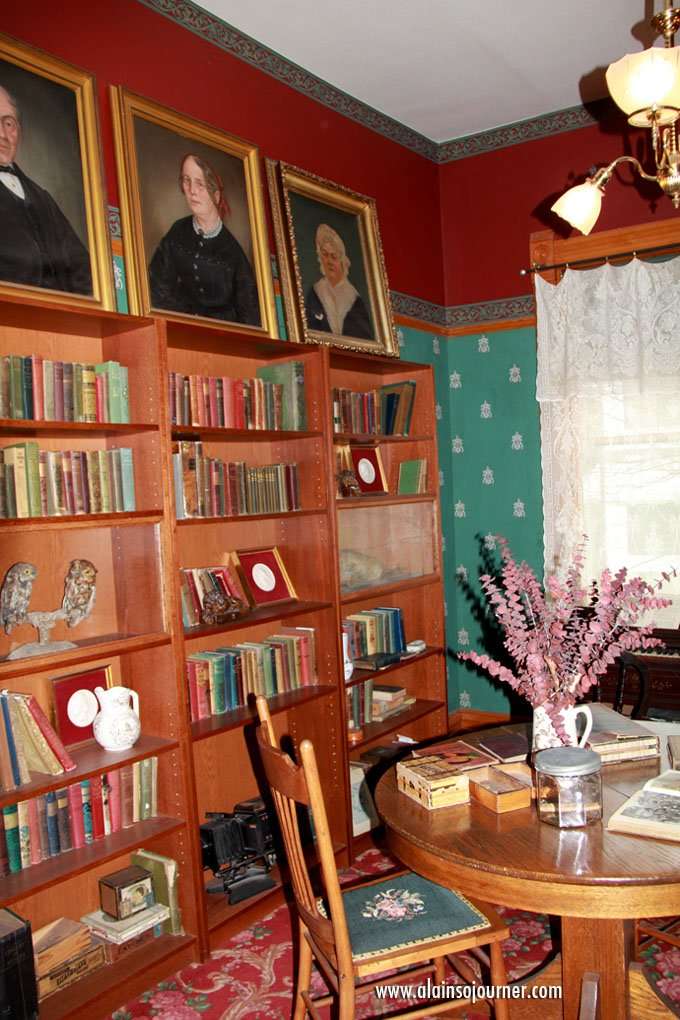 The reading room / library. Hemingway accumulated thousands of books and most of them are now in the neighborhood’s library. 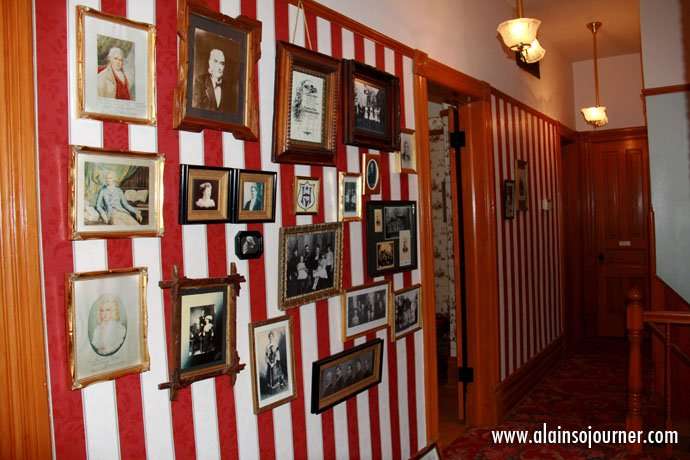 The hallway upstairs are covered in family portraits. Inside the house where Ernest Hemingway was born. 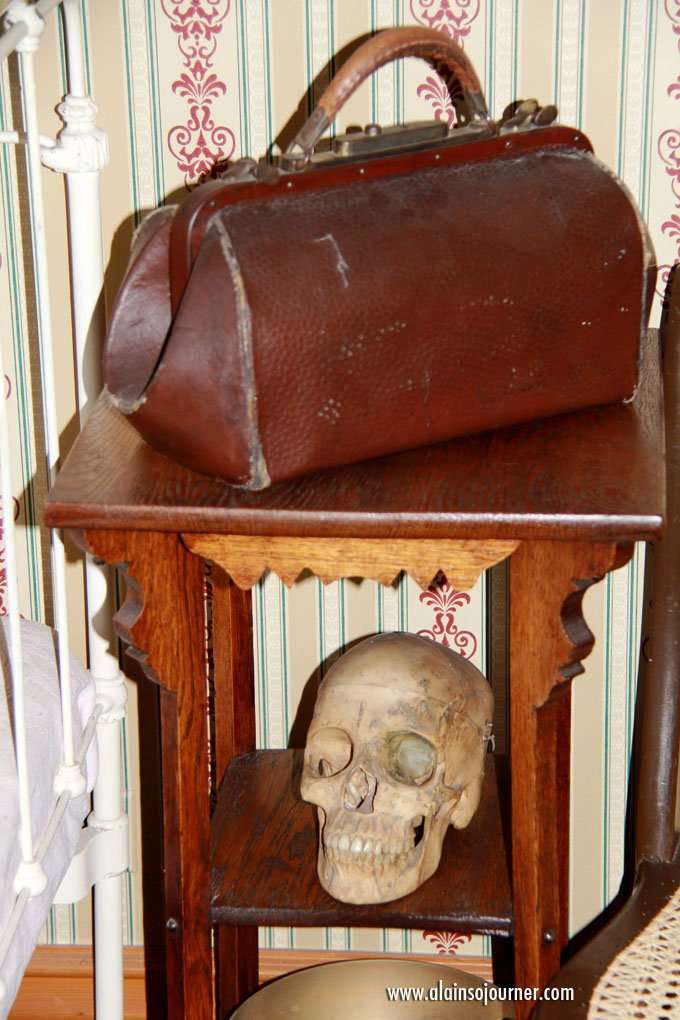 The bag is that of her father’s who was a doctor. The skull must be one of his…? 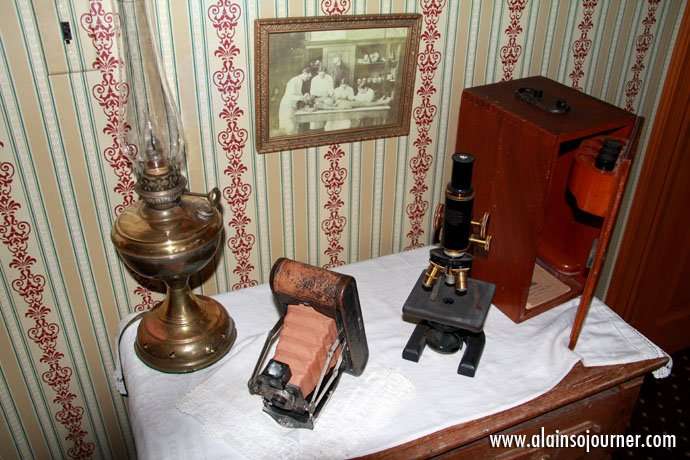 Old medical instruments inside the house where Ernest Hemingway was born. 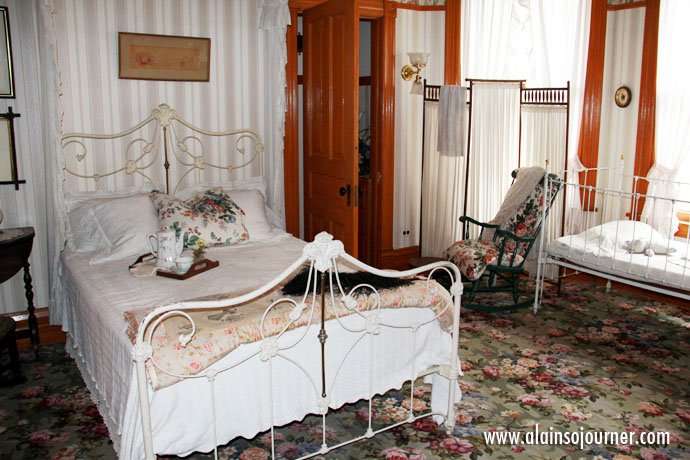 They claim that this is the original bed where the writer was born. But, the docent who toured me around said, “I don’t believe it.” 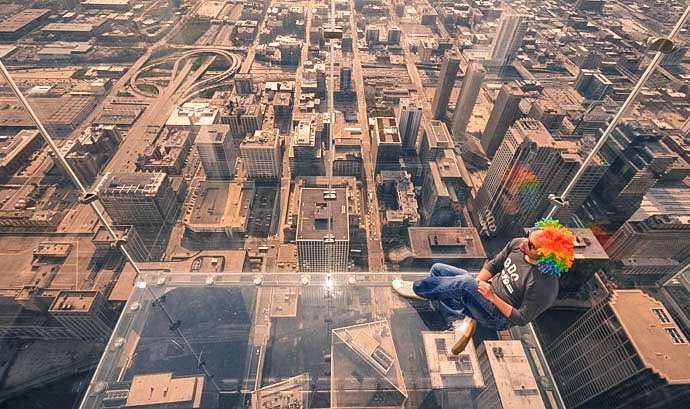 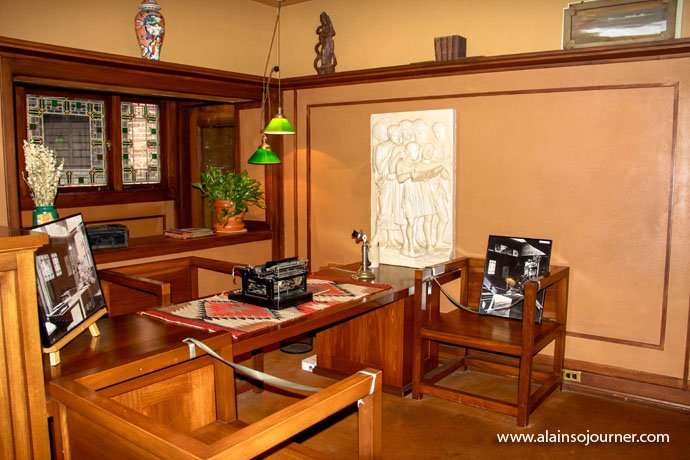 The Legacy of Frank Lloyd Wright