These are the 35 things to do in Havana, Cuba. From riding a classic car to watching the sunset at Malecon or strolling the street, Havana is vibrant and teeming with little things to discover. Colonial architecture is literally everywhere.

Havana is a kaleidoscope of everything: of collapsing decay, of oozing sexuality, of colorful colonial houses, of playful kids, of rampant jineteros (scammers), of warm, happy people, of dusty streets, of stinking rubbish, of excessive propaganda, of scorching heat, of intolerable pollution, of jobless people lazying around and of abject poverty. These scenes didn’t only break my heart but also admire the tenacity and resiliency of its citizens. They’re happy people despite of everything around them. Surviving, like the rest of us, is a way of life.

Havana, as Cuba’s biggest city, is torn between propaganda and modernity. It’s a city trying hard to be modern but pulled back to stay the same. It’s a city ready to embrace the world but freedom is curtailed. It’s a city with so much life yet desperate to be alive. It’s a city of hope yet dreams are limited.

Don’t be dampened by my observations; the city has so much to offer, really. On a happy note, Havana is not quite far from other cities I’ve traveled to. There are good restaurants around and there good bars, too, to satisfy whatever the hedonists are looking for. Be aware, however, that Havana doesn’t come cheap for visitors. You might think that travelling in Cuba is cheap because a teacher there lives on $25/month or a factory manager with family members of 4 lives on $32—you are wrong. Many Cubans depend on the money sent by their relatives abroad.

Cuba is two-faced: there’s a price for the foreigners and the other for the locals. Can you imagine watching a show in a theater for 5 pesos (20 cents) for locals while $5 for tourists? How about eating a $9-seafood dish while the locals pay for $3 CUC only? Ridiculous, isn’t it? If you speak Spanish and pretend like a local, there’s a fat chance you’ll be served with the local menu. But, hey! Havana is still an exciting city to explore. There’s a different kind of atmosphere there I can’t literally describe—aside from the word, different. So, buy a ticket and go now!

35 THINGS TO DO IN HAVANA

On your first day, get up early and walk around Old Havana. If you have a Lonely Planet guide book, follow its Walking Tour there. There’s so much history and architecture in this area.

Streets in Havana are interesting places to walk around. You will always find something quaint, surprising, odd, quirky, beautiful and awesome. Havana streets are safe, so, don’t be afraid to get lost. In fact, I’m hoping you’ll get lost. Like me. 🙂

3. Observe life on and above the streets.

Look up the terraces, the eaves and the rooftops, there’s something to see, admire and even gasp with amazement. And if doors and windows are open, take a peek. If one is inside or an aged person rocking the chair, say, “Hola” and you’ll be rewarded with a response and a smile.

These are pedestrian-only streets and a shopping district. There are many restaurants to try here, too. At the corner of these two streets, you’ll find Hotel Ambus Mundo, painted in orange. Go inside and tell the receptionist you want to see the room where Ernest Hemingway once lived and wrote three of his novels here. They will call the guide to open it for you and pay $2 entrance fee.

Visit the watering holes of Hemingway. Drink a frozen daiquiri at El Floridita (at the western end of Calle Obispo) and sip a mojito at El Bodeguita, where, it said, the great American writer invented the drink himself. And because it has Hemingway’s name attached to these bars, you’ll be paying much, of course!

If you’re only planning to stay in Havana for a day or two and you really want to visit a tobacoo factory, go to any hotels and ask for tours. There’s one in Havana. I didn’t try this because I was planning to do it in Cienfuegos.

Or at any other parks. Observe city/local life. Touts come and go but a polite, “No, gracias” will send them away.

In front of Cinema Yara in Vedado, get a cone or a glassful of ice cream to beat the heat. There’s a looooong line for locals but you don’t wanna do that. There’s an area that caters for the tourists which, of course, in tourist prices, too.

Related: All the Cuban Dishes I Ate in Cuba

9. See a piece of Cuban movie location and reserve a table at Havana’s Best Paladar

The only Cuban movie I’ve seen (four days before I left Toronto) is “Fresa Y Chocolate” (Strawberry and Chocolate). It’s an Oscar-nominated film in 1994. Google it.

The casa where most of the scenes were shot is still there but unattended. However, on its third floor, Havana’s Best Paladar (private restaurant), La Guarida, welcomes visitors with reservations only. I tried as a walk-in customer but no table for one. The earliest reservation I could get was four evenings later, at 9:30. Duh.

If you got more time to kill, join a tour. Santeria is a kind of religion of African origin. The tour brings you to the town of Regla, just outside Havana and you’ll see/learn first-hand the rituals and ceremonies of this religion.

Either you are religious or curious, there’s something new to learn or see inside. Try Catedral de San Cristobal de la Havana in Havana Veija.

Northwest of Parque Central is a paseo where it gets busy during the day. All kinds of businesses are conducted here: real estate agents selling and buying, artisans doing their arts and crafts, old men playing dominoes, cards or chess, touts bothering tourists and some plain people-watching.

13. Strike a pose at the grand mural of Che Guevarra at Plaza de la Revolucion.

You’ve never been to Havana if you haven’t posed in front of Che Guevarra’s mural on the facade of a very ugly building at Plaza de la Revolucion.

14. Visit the memorial of Jose Marti.

Right in front of the murals of Che and Camilo is the tallest tower in the city with a statue of the country’s most revered poet, Jose Marti. Below such tower is a museum dedicated to the poet whose works are studied across academia.

15. Sit among the students on the stairs of University of Havana.

I went there when university students were on a break so I sat there alone. LOL….

It’s a bar district in Vedado area, a stone’s throw away from Hotel Nacional. Go bar hopping. Do I need to say more?

A sing and dance show mixed with cultural and modern twist. Fashion disasters included. There’s dancing after the show.

The museum building itself was once used by Batista. Laws, declarations and bills were signed here. Photos, paintings, murals, antiques, sculptures of the revolutionaries and samples of propaganda posters are all displayed up front. Don’t forget to go to the back of the building, there’s more to see.

Gawd, the portions are big and prices are very reasonable. Taste? It’s ok.

If you’re gay, feast your eyes on the caliente Cuban guys at Centro Vasco, a club where the gays and bisexuals (many) congregate. Do NOT go home until you haven’t seen 5 delicious strippers doing their jaw-dropping and boner-causing thing. Nope, there’s no frontal nudity but you will reallllllyyyy love it. 🙂

For only 5 bucks, you can get on and off the bus in selected destinations around the city. It’s the cheapest way to explore the capital. It comes every 20 minutes. Starts at Parque Central, right in front of Hotel Inglatera.

It’s a 20 minute-ride by car from Parque Central. It offers a different kind of experience to see and smell his old books. Hire a classic car/taxi for $20 bucks, round trip, including the wait time.

How could you skip this experience? It’s a must! Choose and look at these 30 classic cars!

This is a country obsessed with baseball. At 5PM, when the streets are almost free from cars, the shirtless, footwear-less kids go out and play baseball. House windows and doors are closed to avoid “internal” house damage. And be careful passing through, too. These kids can really hit balls.

Ok, I tried two: a sugar coated nacho-like thing and a peanut wrapped in a thin, coned paper. We had it at the Malecon while watching the setting sun and while gulping a bottle of Bucanero beer.

Cuba’s ballet is famous around the world. Watch a performance if you can. I didn’t see one because the National Theater was closed for renovations.

26. Marvel at the collections and architectural design inside the National Fine Art Museum.

Oh, the grand staircase is unbelievably beautiful and the stained-glass ceiling is breathtakingly wonderful! Walk like you’re a Royal descending to meet your rich minions.

At Parque Historico Militar Morro-Cabana, men in uniform perform a canon shot at 8 PM. Get early so you can also see the spectacular sunset and panorama of the city before the ceremony.

Cuban coffee, anyone? There’s no better place to sip it but at one of the outdoor cafes at Plaza Veija.

I never really made it there but the guys I was with in the same casa enjoyed the fun they had there. It’s a 20-minute ride outside Havana. Hire a taxi for $10, one-way, and tell him to pick you up at a certain time of the day.

If this doesn’t sound creepy to you, visit this cemetery where some famous people are buried here. And it also has a very interesting story. Check out your

It might be the only Chinatown in the world with very, very few Chinese people. Look for Tien Tan Restaurant. Good food. And the usher is good-looking, too!

Havana never runs out of buildings to gawk at. Though many are in a state of decay or collapse, their beauty still shines. You’ll see baroque, neoclassical, art deco, art noveau, eclectic, modernist and gothic buildings around the city. Have fun identifying them!

33. Go inside the Hotel Nacional

The moorish lobby seems dark but its impeccably grand! Check out the bar visited by hundreds of famous celebrities and politicians; from Frank Sinatra to Gael Garcia Bernal to Hu Jintao.

34. Watch the sunset at Malecon.

Pick a spot and enjoy the sunset. Grab a beer.

35. Walk the Malecon after sunset.

It’s an 8-kilometer seawall but you don’t have to walk it from beginning to end. Start at Havana Veija to La Rampa or Hotel Nacional. It’s a good place to see Cubans from all walks of life: playing cards, drinking beers, fishing, smoking, singing, kissing, chasing little kids, diving/swimming, selfie-ing, listening to a battery-powered stereo/tape/cd-player, teasing, checking out women’s asses, flirting and a whole lot more.

There are still many, many things to do in Havana but I was so tired to explore them all. Should I go back? 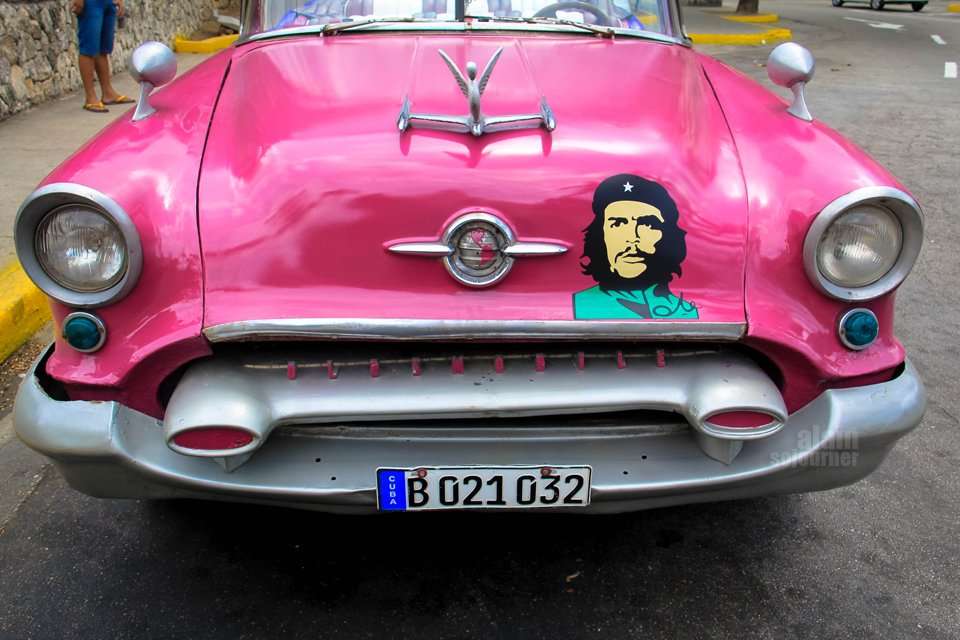 Riding on the Classic Cars in Cuba 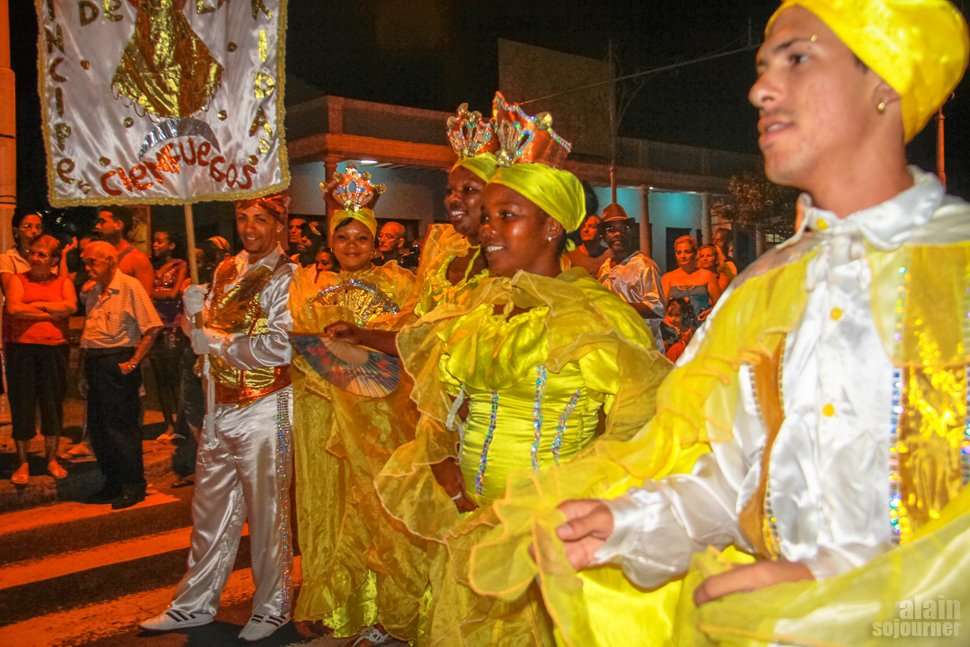 A Day in Cienfuegos