The long weekend was full of festivities that people would be confused which one they would attend: Pride Weekend, Canada Day celebrations, CHIN Picnic, etc… Thats why, its no wonder if this years Pride spectators would be less than that of last years.

Choose your next Pride Costume HERE!

This years Pride Parade (last weekend) was my third year in a row—and its the worst. When I say worst, its unglamorous and doesnt have shock value. Its less political–which I believe Pride should be—and it looked like its a 90% repeat of Pride Parade last year. Yes, Im talking about performers/masqueraders who recycled their costumes–as if no one would notice it. Hello, we have better memory than you! 🙂 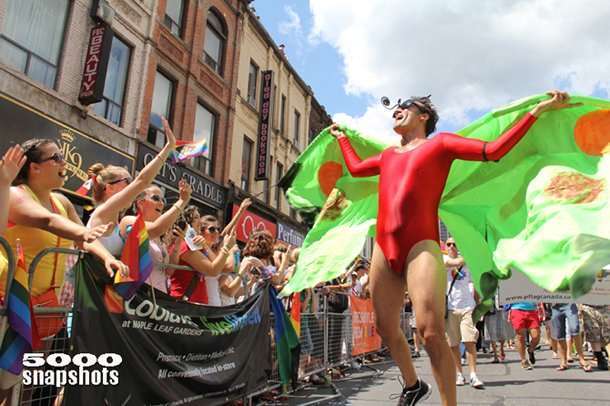 “Where are the hot guys?”, asked a friend of mine who has a penchant for flat abs and toned muscles. She travelled three hours with her set of friends (from Kingston) just to see the Pride and was devastated to learn that the boys who showed up at the Parade were “Just okay” to her taste. LOL…. She also mentioned about where the drag queens are. Why were they not present there? Well, there were a couple there, actually. When the Squirt and the Trojan boys (who distributed free Trojan condoms) came in sight almost at the end of the Parade, she was ecstatic and her complaints were forgotten—for a while. When she met up with me after the Parade, she was still grumpy that there werent enough hot boys in there! When she saw the Joe Fresh twinks on Church Street, the WHOREmone inside her went fired up and she hastily said her goodbye–by giving me a good spanking on my arse.

Choose your next Pride Costume HERE!

Later that night, when I talked to a guy on the street from California, he said: “While Toronto boasts of its well-attended Pride festivities (more than a million), Id say that the Parade was, itself, boring. Its not something Id expected.”